As we come to the end of a remarkable Commonwealth Games on English  soil it is important for us to reflect on an amazing week of sport for British Weight Lifting which saw a combined weightlifting and para powerlifting medal haul of four gold, three silver and two bronze medals. Team England won its first male weightlifting gold medal in 20 years and para powerlifting secured its first ever gold medal. 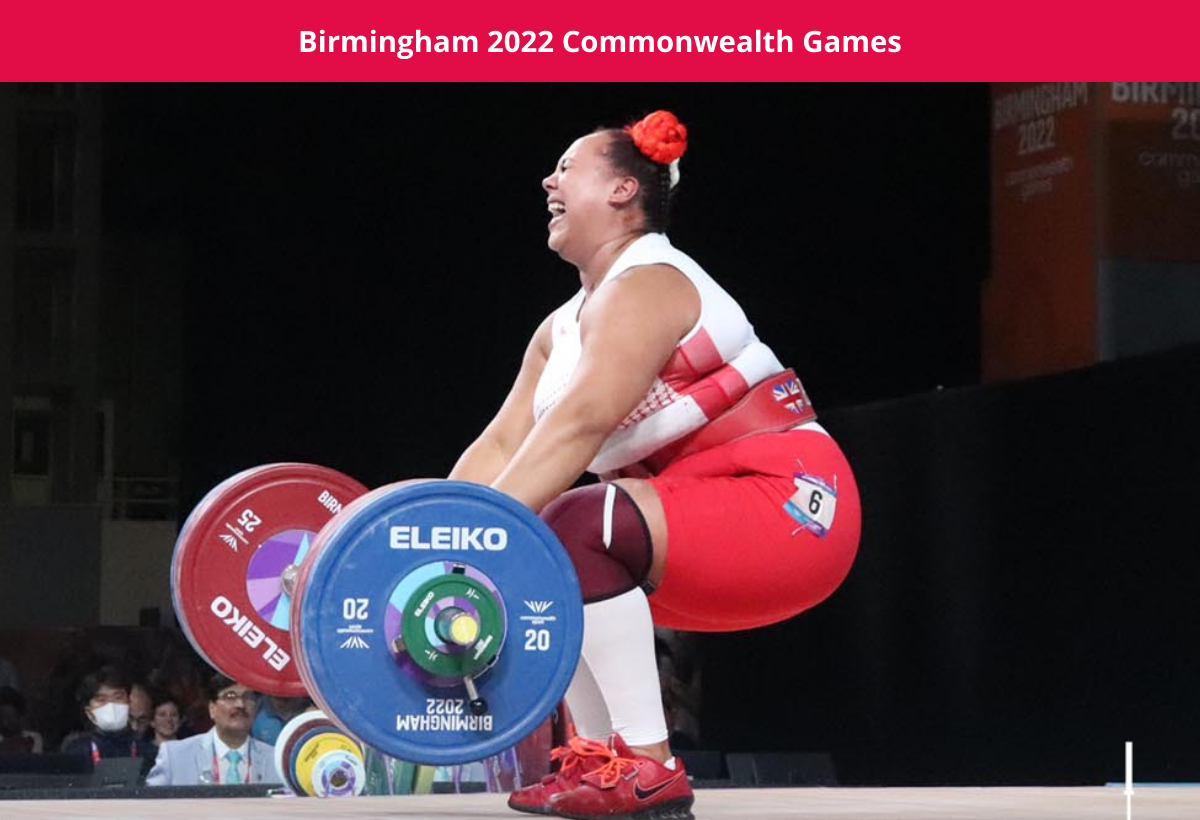 This is two extra gold medals versus the performance at the Gold Coast in 2018 and ranked the team two places higher on the medal table.

In addition, eleven games records and fourteen British records were broken over the course of the five days.

Jess Gordon-Brown secured the first English weightlifting silver medal of the Games in the women’s 59kg category. Her best snatch was 86kg and her final clean & jerk of 111kg gave her a fantastic total of 197kg putting her in second place.

Chris Murray had an absolutely incredible competition in the men’s 81kg category. Chris made a personal best 144kg snatch and 181kg clean and jerk. Chris finished the competition in first place with a total of 325kg, bringing home a gold medal for England. He is the first English male weightlifter to secure gold in 20 years, with the last being from Delroy McQueen in 2002.

Sarah Davies was competing in the women’s 71kg category. She secured a snatch of 103kg giving her a new women’s senior British record and personal best. Sarah’s second clean and jerk of 126kg secured her the gold medal, along with a Commonwealth clean and jerk and total (229kg) record.

Emily Campbell was in the final women’s weightlifting session of the Games, competing in the 87+kg category. Emily’s snatched a whopping 124kg and clean and jerked 162kg which was heavier than her Olympic silver medal snatch (+3kg) and clean & jerk (+1kg) performance. This gave Emily a sensational 286kg total, a new personal best, a new Games record, three new British records, and most importantly, a gold medal for England.

Stuart Martin, Head of Performance for Weightlifting and Team England Coach has said,

“It has been a privilege to lead such a talented group of weightlifters for these games, the record breaking performances speak for themselves and we are immensely grateful to all the coaches, support staff, friends, families and employers who have supported them to prepare as diligently as they have done over the months leading up to and during the games.

I hope the efforts of these athletes have inspired our younger generations to see what is possible for them in the future and inspired the wider public to come and try our sport for all of its physical and mental wellbeing benefits”.

In the Commonwealth Games, there are only two weight categories for para powerlifting. Due to the reduced number of categories, the rankings are decided using a formula that takes in to account the athlete’s bodyweight. This standardises the group and allows a winner to be selected. Once a lifter has a successful lift, the formula calculates how many points they have gained. These points are used to rank the athletes.

Team England’s Zoe Newson secured an incredible gold medal with a 101kg lift, giving her 102.2 points. This is the first ever para powerlifting gold for Team England and the only one Nigeria have never secured.

Olivia Broome secured a personal best weight of 111kg on her last attempt. This gave Olivia 100.0 points, putting her in second place and a silver medal for England.

Mark Swan smashed a new personal best of 202kg on his third attempt, making him only the third para powerlifter to go over 200kg in the lightweight section. This gave Mark 145.5 points, putting him in second place overall, and giving him that all important silver medal for England.

Liam Mcgarry, who after three months out of the sport due to multiple complex surgeries earlier this year, returned with the best performance of his career, three for three, eight white lights and only 5kg off his personal best.

Micky Yule secured a bench press of 192kg to give him 130.9 points and a bronze medal for Scotland.

The team also secured three British records – Rebecca Bedford in the 67kg category, Olivia Broome in the 55kg category and Mark Swan in the 72kg category.

“What has made the results so special is that it has been such an intense 12 months. Three events of such huge significance on careers, funding and trajectories ahead of Paris 2024. Some of these athletes have backed up last year’s Paralympic games with the world championships and now a Commonwealth Games. Some have experienced their first multi-sport Games here in Birmingham which puts them in good stead should they earn the opportunity to go to Paris 2024.

The nature of the performances were all phenomenal, collectively but also individually as each had their own targets which were all obliterated.

The team behind the team were exceptional in delivering the necessary services which athletes rely upon to move continuously into new territory and excel. A huge thanks to the Commonwealth Games Federation, Team England and British Weight Lifting for the ongoing support.”

“I would like to congratulate all British Weight Lifting athletes who competed at the Commonwealth Games. There were some outstanding performances and I am delighted at the number of medals secured by the team.

I would like to give particular thanks to the Commonwealth Games Federation, our home nation Commonwealth Games Associations, Birmingham 2022 Organising Committee and the host city partner Birmingham for putting on an incredible Games for both our athletes and supporters. I would also like to thank our funding partners UK Sport, Sport England, TASS and The National Lottery for supporting British Weight Lifting and contributing to the continued development of the sport”.

Here is an overview of all the results, including Commonwealth and British records, for all 37 British Weight Lifting athletes from the Birmingham 2022 Commonwealth Games.

To read all the action from the six days of weightlifting and para powerlifting action, please click on the links below:

If you are interested in switching sports to weightlifting, we are holding a talent transfer event on 11 September at Loughborough University. For more information and to register your interest, please click here.