Two golds for BWL on day three of the Commonwealth Games

British Weight Lifting would like to congratulate all athletes who competed on day three of weightlifting at the Birmingham 2022 Commonwealth Games, a day when TWO gold medals were secured by Chris Murray and Sarah Davies. 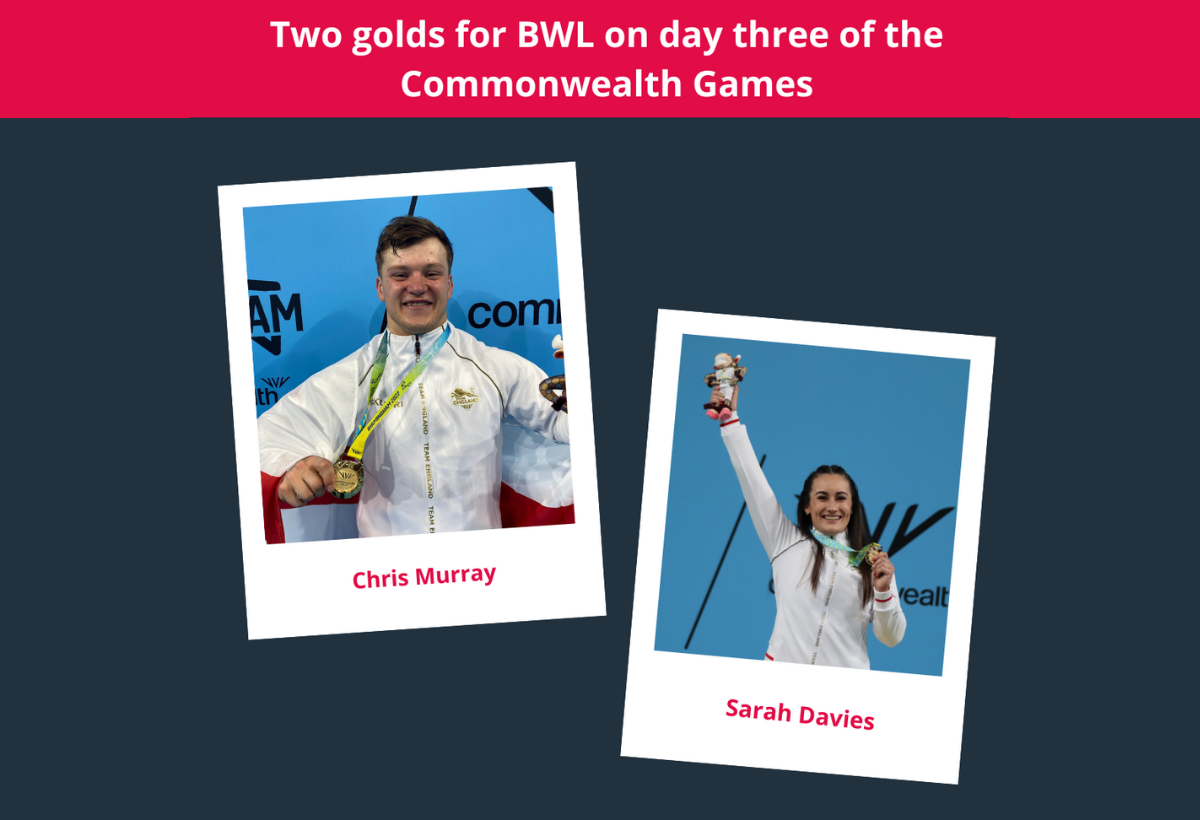 The first weightlifting session of the day was the men’s 81kg category, with Jason Epton representing Scotland and Chris Murray representing England.

Jason opened his snatch at 120kg narrowly missing out on securing the bar overhead. For his second attempt, Jason re-attempted 120kg and made light work of the lift. Jason unfortunately missed his last attempt at 125kg.

Jason had an easy clean and jerk opener at 150kg and moved on to a confident 157kg. He unfortunately missed out on his last attempt of 162kg.

This gave Jason a massive 277kg total and put him in tenth place.

Chris opened his snatch at 138kg, just 5kg under his personal best. The lift was a strong opener gaining three white lights. Chris also made his second attempt look easy at 141kg.

The pressure was on as he entered the clean and jerk in the top spot.

Chris opened at 174kg, made the lift and then made his second lift at 178kg, which was a 1kg personal best.

Chris’s third and final attempt was a staggering 181kg, and he dug deep and finished the lift.

This meant he went six for six, made competition personal bests across the board, and made a huge total of 325kg.

After a tense couple of attempts from other lifters, Chris finished the competition in first place, bringing home a gold medal for England.

This makes Chris the first English male weightlifter to secure gold in 20 years, with the last being from Delroy McQueen in 2002.

Chris commented when asked how it feels to win gold “Incredible. So, so happy with how I performed and the coaching team did a great job putting me out on what I needed to come home with this [gold medal]. Everyone comes in wanting to lift PB’s and come away with a gold medal. I knew it was a possibility, everyone was so strong in my category it was so close. I knew whoever made six lifts was going to be the person who won that competition and I’ve gone and done it.”

Caroline Doyle was confident on her first lift and successfully snatched 78kg but missed her second and third attempts of 81kg.

Despite the slow start, it didn’t put Caroline off, and she put on a strong performance with her clean and jerks. She confidently hit 98kg and 101kg on her first and second attempts. She was unsuccessful on her third lift of 105kg which would have been a new personal best.

Christie Marie Williams opened with an 80kg snatch and followed with 83kg. Unfortunately, she was unsuccessful on her third lift of 85kg.

Her clean and jerk lifts didn’t go to plan with Christie missing her first and second attempt of 100kg. However, she came out to the cheer of the crowds and gave her all to hit her third and final attempt at 100kg.

This gave her a total of 183kg, putting her in seventh place.

Zoe Smith hit her first snatch of 88kg despite a slight stumble on the platform. She missed her second and third snatch attempts of 91kg, and it looked like she was out of the running for a medal.

Zoe came out to a clean and jerk of 114kg which she hit successfully.

A whopping 8kg went on the bar for Zoe’s second attempt as her coaches strove to help her secure a podium place, which Zoe was successful in lifting to the cheer of the crowd.

Zoe finished with a total of 210kg putting her in fourth place overall.

We asked Zoe about her performance as she stepped off the platform, “I’m actually feeling pretty damn proud of myself to be fair, I thought really hard on that last clean and jerk. If you’d said at the beginning of the year, I’d get under 125kg and stand it up, I’d be like ‘your laughing’. But yeah, I’m glad. Snatch is not my lift, if we could do away with the snatch I would be a much better athlete. But you know what, I’m pretty proud of myself and I enjoyed competing out there which is something I’ve been missing lately”.

The final competition of the day was the women’s 71kg category with four British Weight Lifting athletes competing. Alice Aitchison for Scotland, Faye Pittman for Wales, Sarah Davies for England and Holly O’Shea for Gibraltar.

For Alice Aitchison, it wasn’t her day and after missing all three of her snatches she bowed out of the competition. British Weight Lifting are proud of what you’ve achieved in securing your place at the Commonwealth Games Alice and look forward to seeing you back on the platform soon.

Holly O’Shea is Gibraltar’s first ever weightlifter at a Commonwealth Games.

She came out confidently to hit her first and second snatch of 70kg and 74kg respectively. She attempted 76kg on her third lift but unfortunately missed it.

Holly went three for three on her clean and jerks, securing a personal best with her final lift of 97kg.

This gave Holly a total of 171kg, finishing in tenth place.

Faye Pittman’s best snatch was 81kg which she hit on her first lift, but unfortunately missed her second and third snatch attempt of 84kg.

Faye had a good first clean and jerk with a 105kg lift.

Despite completing her second clean and jerk of 108kg, it was overruled by the technical jury as a press out. Faye was successful at 108kg on her third and final lift.

This gave Faye a total of 189kg, finishing in ninth place.

There were lots of twists and turns in the fight for first place for Sarah Davies.

Sarah Davies came out and hit three for three in her snatches, lifting 97kg, 101kg and 103kg giving her a new women’s senior British record and personal best. Her biggest rival, Nigeria’s Ogbonne Eze, timed out on her final snatch placing Sarah in first place as they headed into the clean and jerk round of the competition.

Despite three attempts, Ogbonne Eze failed to make a comeback, missing all her clean and jerk lifts.

Sarah came out with gold in her sights but kept the crowd waiting as she failed to make her first clean and jerk lift of 126kg when she became dizzy after the clean.

Her second lift of 126kg secured her the gold medal, along with a Commonwealth clean and jerk and total (229kg) record.

She missed her third and final clean and jerk of 230kg.

We asked her about the support of her coaches as she stepped off the platform, “They are like the three musketeers, those three. They’ve all got a job, they all know what it is and they all do it perfectly. They know me inside out and back to front, they’ve all been involved in my weightlifting career for a very long time. I trust them with my life and it’s just a case of whatever I need to do I know they’ll do the right thing for me.”