Tuesday 2 August brought with it three more groups of weightlifting, the women’s 76kg, the men’s 96kg, and the women’s 87kg category. Five home nation athletes took to the platform and gave their all. 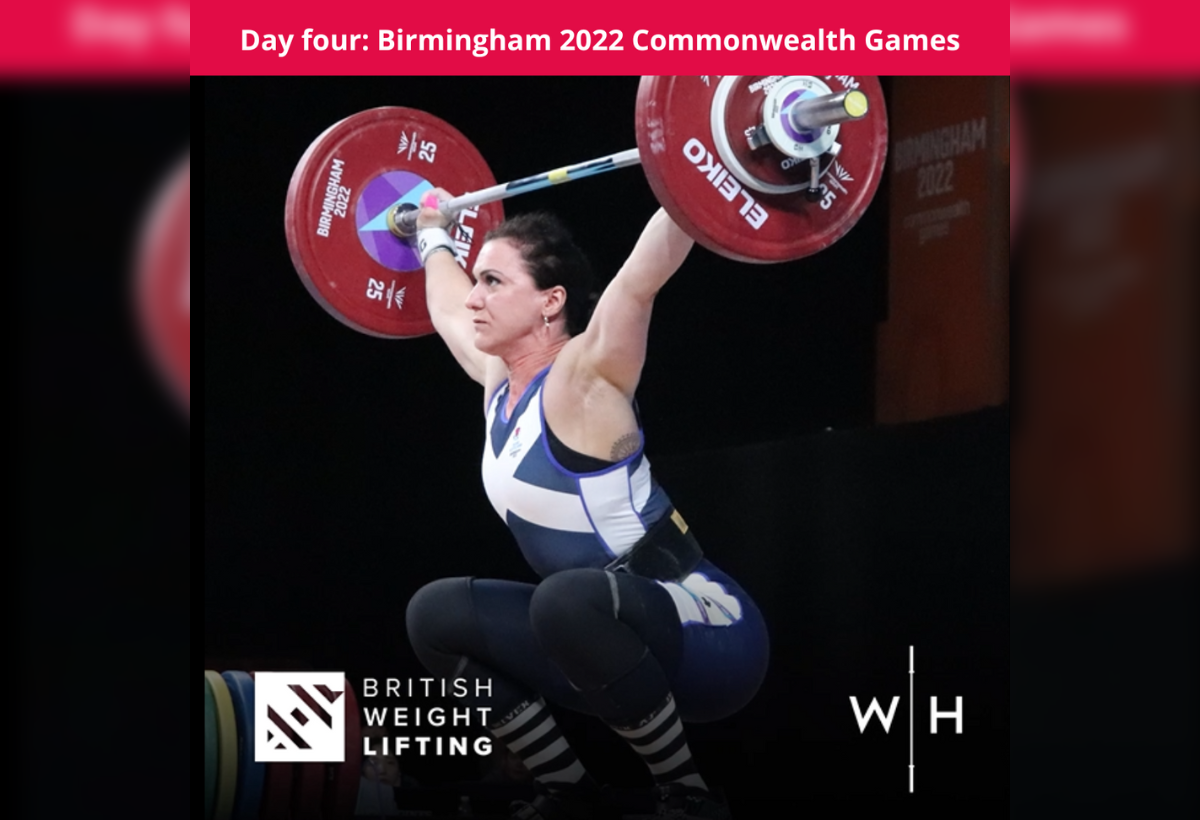 Amy was first out with a 70kg opening snatch, which she power snatched with ease, celebrating with a dance on the platform. Amy did a huge 16kg jump to 86kg for her second attempt, 4kg under her personal best. She made the lift, catching in a full depth squat. 90kg was on the bar for Amy’s last snatch, which she unfortunately missed.

Amy opened her clean and jerk at 105kg, a lift that was originally deemed a good lift but unfortunately was overturned by the jury due to a press out in the jerk. Amy’s second attempt was not taken to give her time to rest.

Amy limped onto the platform for her third and final attempt at 107kg. With the crowd behind her, she dug deep and cleaned the weight, followed by a heart wrenching jerk. Amy left everything out on the platform, but the jerk was unfortunately deemed a press out by the technical officials.

British Weight Lifting are proud of what you’ve achieved in securing your place at the Commonwealth Games Amy and congratulate your grit out on the platform. We look forward to seeing you back on the platform soon.

Agata Herbert made her snatch opener at 86kg and made the lift after a rush to the platform. Agata jumped to 90kg on her second attempt, narrowly missing out on securing the barbell overhead. Agata’s last attempt was attempted at 90kg, but she unfortunately timed out the attempt.

Agata really pulled it out of the bag with her clean and jerks, starting with an easy clean and jerk opener at 105kg. Agata followed this with 110kg, and a personal best third attempt of 113kg.

This gave Agata a massive 199kg total, putting her in seventh place.

Deborah Alawode had a snappy snatch opener at 90kg. 3 kilos were added to the bar for Deborah’s second successful attempt. Deborah attempted 96kg on her final attempt, just missing the barbell behind after she received the bar.

Deborah opened her clean and jerk at 114kg, making the lift. Deborah made a 5kg jump to 119kg for her second attempt, but the bar pulled her forwards in the clean, causing her to drop the barbell. Deborah came out for her third attempt of 119kg to a roaring crowd. Deborah made the lift and gained 3 white lights from the technical officials.

This gave Deborah an immense 212kg total, putting her in fourth place.

The next group of the day was the men’s 96kg, with Cyrille Tchatchet II representing England.

Cyrille had a confident snatch opener at 154kg. Cyrille’s second attempt was an equally snappy 158kg. His third attempt was at a Games record of 162kg, which he got under but just missed securing the bar overhead.

In the clean and jerk, things seemed off for Cyrille as he had two failed attempts at 185kg after making the clean and just missing out on the jerk. He went up 3kg to buy him some time back stage where he received treatment from Liam Rodgers, head physiotherapist. Unfortunately, it was not to be and Cyrille, in obvious discomfort, missed his last attempt.

Cyrille, your journey to representing England at the Commonwealth Games has been incredible and we look forward to seeing you out on the competition platform again soon. You did Team England proud!

Last to the platform was England’s Emily Sweeney in the women’s 87kg category.

Unfortunately, it wasn’t Emily’s day, with her missing all three snatch attempts at 88kg.

Well done Emily in securing your place with Team England at the Commonwealth Games, this will hopefully be the first of many Commonwealth Games for you. You have a bright future ahead of you and we look forward to seeing you compete again soon.

Congratulations to all the athletes who lifted today.