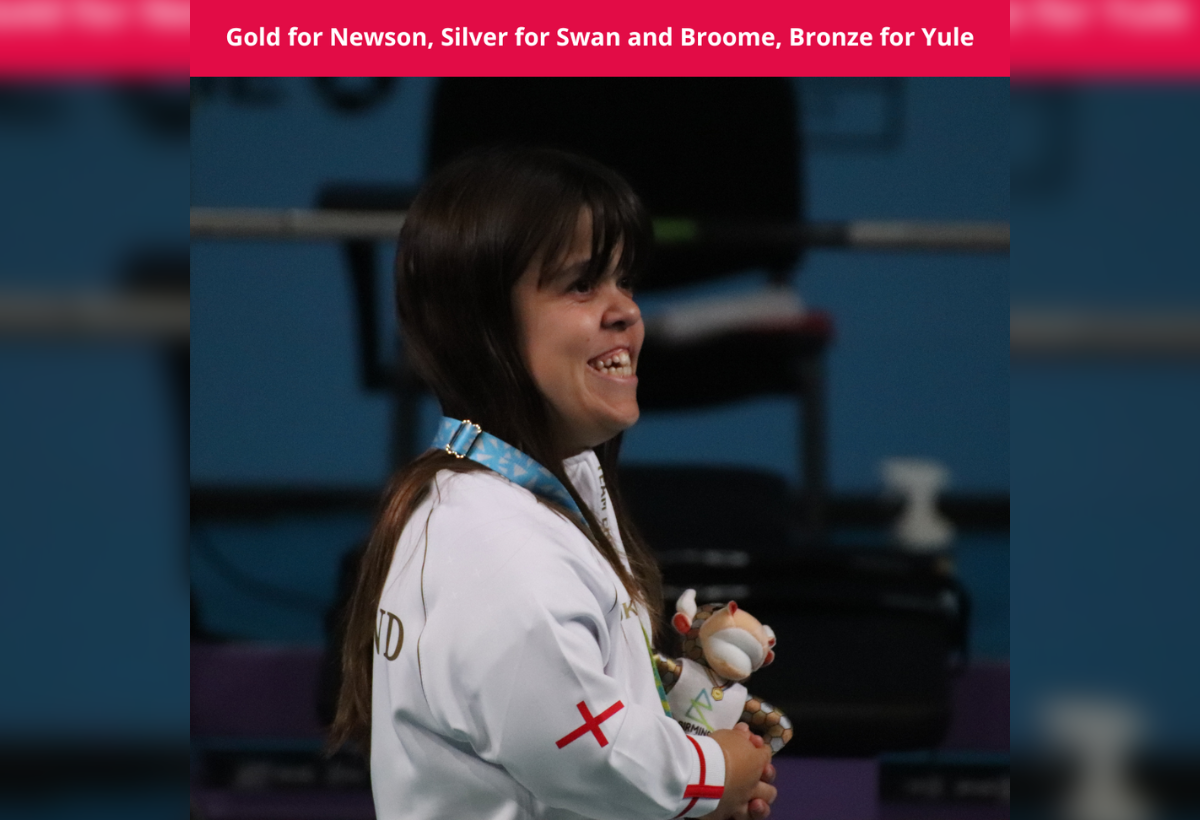 In the Commonwealth Games, there are only two weight categories for para powerlifting. Due to the reduced number of categories, the rankings are decided using a formula that takes in to account the athlete’s bodyweight. This standardises the group and allows a winner to be selected. Once a lifter has a successful lift, the formula calculates how many points they have gained. These points are used to rank the athletes.

The day kicked off with the women’s lightweight category where we had Olivia Broome and Zoe Newson representing England, and Kim Dean representing the Isle of Man.

Kim opened at 80kg for an easy first lift, following with a 84kg second lift. Kim took her last attempt at 87kg but unfortunately the lift was deemed a no lift due to press sequence.

This gave Kim 73.7 points, putting her in eighth place overall.

Zoe Newson took her opening bench at 97kg for a speedy triple white light lift. Zoe jumped up to 99kg for her second attempt and made light work of the attempt. Zoe took her last attempt at 101kg, making the lift.

This gave Zoe 102.2kg points, putting her in first place for a gold medal for England.

Olivia opened at 105kg, making the lift look easy. Olivia took her second attempt at 109kg for a triple white light lift. Olivia made a personal best weight of 111kg on her last attempt.

This gave Olivia 100.0 points, putting her in second place for a silver medal for England.

Next up was the men’s lightweight category, where we had Mark Swan and Matt Harding represent England.

Matt opened with a confident 165kg for three white lights. Matt took his second attempt at 170kg for a good lift. For his final attempt, Matt attempted 175kg for a final good lift and a new personal best.

This gave Matt 123.7 points, putting him in sixth place overall.

Mark opened his bench at a huge 193kg but was unfortunately the attempt was deemed a no lift for body position. Unshaken, Mark moved up to a personal best weight of 199kg for his second attempt, getting three white lights. For his last lift, Mark smashed a new personal best of 202kg.

This gave Mark 145.5 points, putting him in second place overall, and giving him that all important silver medal for England.

The evening session started with the women’s heavyweights, where we had Rebecca Bedford representing England.

Rebecca opened her bench on her current personal best of 91kg, making light work of the attempt, progressing to 94kg for another three white lights on her second lift. Rebecca unfortunately missed her last lift of 96kg.

This gave her a score of 80.8, putting her in sixth place overall.

The day concluded with the men’s heavyweight category, where we had Liam McGarry representing England and Micky Yule representing Scotland.

Micky opened his bench with a speedy 186kg. Micky jumped to 192kg for his second attempt gaining three white lights. Micky took his final attempt at a huge 197kg, but the completed press was deemed a no lift on the press sequence.

Liam opened at 205kg and the bar moved incredibly well. The bar jumped to 210kg for his second attempt for another good lift. Liam attempted 215kg for his final lift, shouting “Come on! Easy!” before gaining three white lights.

This gave Liam 116.4 points, putting him in fifth place overall.

British Weight Lifting would like to congratulate all the athletes that competed today, you have done us proud.