Just days after competing at the European Championships in Georgia, Chris Murray went six from six at BUCS on Saturday and snatched 140kg for the first time in his career. 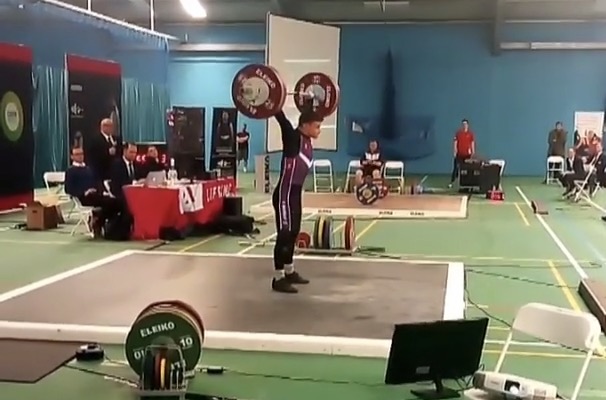 Murray flew back to represent Loughborough University at the event in Twickenham and throughout the weekend he was completely in the zone.

That total was only 4kg shy of the result he managed at the Europeans earlier this week on Wednesday where he placed 23rd on the continent.

“I wanted to give 140kg a go, but the main focus of today was going six for six,” said Murray.

“If it was on then I was always going to take it, but if it wasn’t then I would have gone light similar to Zoe (Smith) to save myself and guarantee Loughborough the points.”

Murray delivered a confident performance on the platform. Before his last snatch attempt, he was even humming the Greatest Showman theme tune to psyche himself.

After hitting 140kg he celebrated by performing backflip.

“I couldn’t control myself,” said Murray on his celebration. “I’ve been chasing 140kg for a while now. I’ve had a few attempts in the gym, but it was just great to finally get it in a competition.”

The young lifter knows how to get a crowd going and his efforts were warmly received by those watching. In terms of audience interaction, Murray is right up there among the best in the sport.

“I’m very happy as I wasn’t sure what I was going to hit. I was so close to 140kg at the Europeans, so I thought if it was on then I’d give it a good crack and that’s what I did.

“Overall it’s been a very good week. Can’t have gone much better if I’m honest. I haven’t even gone home yet as I’ve been travelling a lot. I landed on Thursday, drove straight back up to Loughborough then down here Friday night.”

After this competition Murray has definitely earned a well-deserved rest for now before setting his sights on competing at the British International Open in two months’ time.