After an incredible sporting career Micky Yule has made the decision to retire from Para powerlifting. 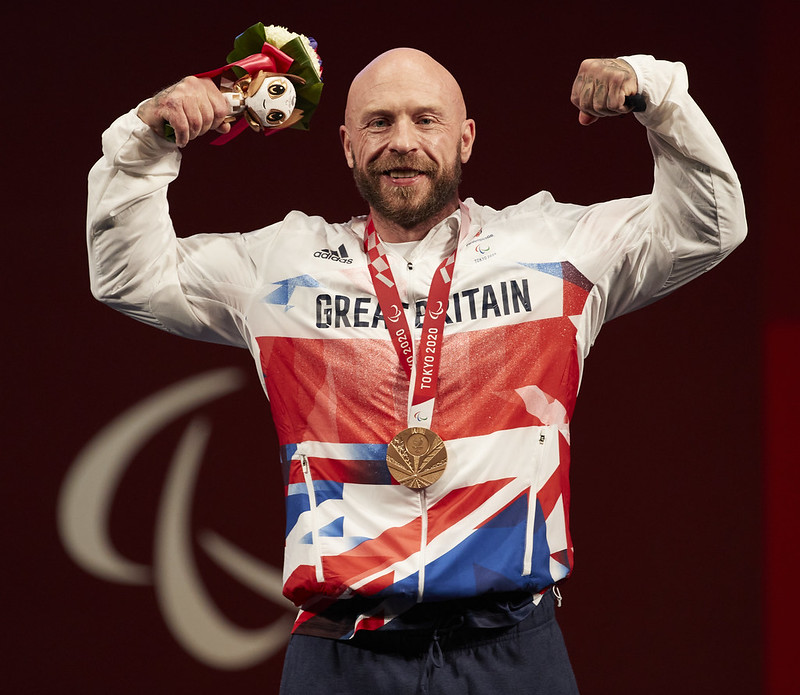 Yule was born in Edinburgh, Scotland in 1978 and grew up in Wallyford, Midlothian.

He joined the British Army at the age of seventeen. Yule served as a staff sergeant in the Royal Engineers and was posted to Helmand province. In March 2010, whilst on patrol, Yule stood on an improvised explosive device.

Yule was a member of the Army Powerlifting team before his injury and took up para powerlifting as part of his rehabilitation.

In 2014, he competed at the IPC Powerlifting World Championships, where he finished fourth. 2014 also saw Yule compete at the Commonwealth Games in Glasgow, competing for Scotland in the men's 72kg+ division where he picked up another fourth place ranking.

In the build-up to the 2016 Paralympic Games in Rio, Yule embarked on further upward trajectory with his competition performances. At the 2015 European Championships in Eger, he took the gold medal in the men's 80kg category. He followed this with another gold, this time at the 2016 Invictus Games, lifting a personal best of 190kg to dominate the competition.

In 2018 Yule won another European Championship title and finished fourth in his second Commonwealth Games in 2018 at the Gold Coast.

As preparations built towards the 2020 Paralympics Games, Yule produced a strong performance at the test event taking gold at Ready Steady Tokyo in 2019.

A sensational showdown at the Dubai World Cup saw the Scottish lifter successfully defend his top eight position in the Tokyo 2020 rankings on bodyweight by just 20 grams due to a brilliant last lift of 185kg in the final Tokyo qualifier.

At the delayed 2020 Paralympic Games in Tokyo, para powerlifting saw Micky Yule win bronze in the men’s up to 72kg category lifting 182kg.

At the World Para Powerlifting Championships in Tbilisi, Georgia at the end of 2021, Micky Yule was in the men’s 80kg class which is a class higher than he usually competes in. Micky finished in tenth place, adding an impressive 8kg of progress on his Tokyo lift of 182kg in the class below.

Micky was selected to represent Scotland at the 2022 Birmingham Commonwealth Games. Micky was also selected to be flagbearer for Scotland in the opening ceremony of the event. At the competition, Micky lifted a massive 192kg for a bronze medal in the heavyweight category.

We reached out to some of those who worked along side Micky to see what they had to say to Micky on his retirement.

Mike Whittingham, Director of High Performance at sportscotland, said: “Micky was discovered during our Gold4Glasgow talent search ahead of the 2014 Commonwealth Games and went on to compete at the highest level in his sport. Micky faced significant challenges but met them all with extraordinary determination and we were proud to support him through his journey as an athlete.

“I am absolutely delighted that Micky was able to go out on a high, winning a Commonwealth Games medal and carrying the flag for Team Scotland. It was a fitting finale for a very special athlete.”

In a video message to Micky, British Weight Lifting Para Powerlifting performance Director Tom Whittaker spoke about what makes Micky so incredible. “Your integrity is and was through the roof. You did what you said you were going to do. And you were reliable, rock solid, for the years, for the decade that you were on this programme.”

“From an athlete perspective: delivering when it mattered. Raising your potential in the moments where it was most important for you and for the programme. You consistently did that more regularly, more frequently as your career progressed. To the point where pretty much every international competition that mattered- which was the majority of them over many years- you delivered, you found an ability to raise your potential in the days leading up to, and on the day. To the point where on the [competition] day, your shape was the best it had been throughout the proceeding process. That is an incredibly difficult thing to do once let alone consistently… …It showed you were a master of your craft.”

Tom also discussed the moment Micky achieved a Paralympic medal in Tokyo. “It’s something that is laser written into my brain. And I will cherish every moment that I’ve got to re-live that.”

Tom finished his message wishing Micky well “I can only wish you well and think fondly of the years that we spent travelling around the world. Trying to win. Trying to improve your sporting capabilities. So thank you for all the memories, and all the growth and learning you gave to myself and the programme. And all the best for your career moving forward”

Neil Crosbie, sportscotland Institute of Sport Powerlifting Performance Coach, spoke on his time with Micky. “The day has come. You’ve decided to retire. It has been a fantastic journey. It has been my privilege to have been your coach for the last eleven years.”

“There has been some fantastic highlights on the way: Gold Coast 2018, Rio 2016, Commonwealth Games Glasgow 2014. Who could forget the roar of the crowd when we stepped out on to Celtic Park at the opening ceremony.”

Neil ended his message “I will miss our chats in between heavy sets in the training room, but I wish you all the best. And, you know, people do come out of retirement, and the door will always be open at Team Scotland.”

Ben Richens, British Weight Lifting’s Lead High Performance Coach spoke about the high standards Micky would set himself. “He is someone who definitely set the tone and led by example in the GB team. I think Mic is a fantastic example to any athlete of what’s possible if you have passion, dedication and discipline in your approach to training… …Mic, good luck in the future, I know you won’t need it. It’s a pleasure sharing time on the GB team with you. We will see each other in the future, I am sure.”

British Weight Lifting Psychologist Hugh Gilmore reflected on Micky’s successes. "When you look at everything you did get done, between your personal life and your sporting life and also your professional life. You spun many plates very well, very successfully, and I don’t know if there is anybody else who has managed to spin so many different plates and keep them all spinning. So, commendable, commendable effort. You’ve done well.”

“One of the highlights of my careers, is getting up at 3am to watch a screen refresh to find out you had won a medal in Tokyo, and then dancing around the kitchen by myself… … absolutely commendable stuff mate. Privilege to work with you.”

Meghan Bentley, Sport Nutritionist, spoke about how hard Micky worked to achieve his medals. “Your ability to execute a nutrition plan is testament to the hard working and determined character that you are. And for that to end with two bronze medals was just an absolute dream. I am so proud of what you have achieved, and what you’ve gone on to achieve in your new role. I wish you the best of luck in that next chapter for you, I know you’ll absolutely smash it.”

Liam McGarry, Micky’s World Class Programme team mate spoke about competing with Micky at the Birmingham 2022 Commonwealth Games. “Finishing on the most special day at the Commonwealth Games, being able to compete against you. Which, again, was the first and last time we got to do that. It was such an amazing experience to be in that warm up and that competition area with you. And it was topped off fantastically by you getting on the podium and being able to celebrate on stage with your daughter in your home country.”

“I wish you the most magical and successful pastures new mate. It really is going to be weird without you. Especially at the European Championships when I got a lift and I’m looking for the noise and it wasn’t quite there. Mate it’s been my pleasure and hopefully we can catch up at the white house soon over a nice cup of tea or something.”

Fellow World Class Programme team mate Paralympian Olivia Broome spoke about the first time she met Micky. “I remember the first time that I saw him, I was kind of like ‘I don’t want to mess with this guy’. But once you got talking to him, he was the nicest guy ever.”

“He has been such an inspiration with all the work he has put in this sport. Again, he is probably one of the hardest working athletes that I’ve got to know, and I’m very grateful that I’ve been able to call him a teammate. And I wish him nothing but the best.”

British Weight Lifting is incredibly proud of Micky’s determination, resilience, and sporting successes. We would like to extend gratitude for your dedication and efforts to the sport of para powerlifting and wish you all the best in whatever venture you decide to pursue. 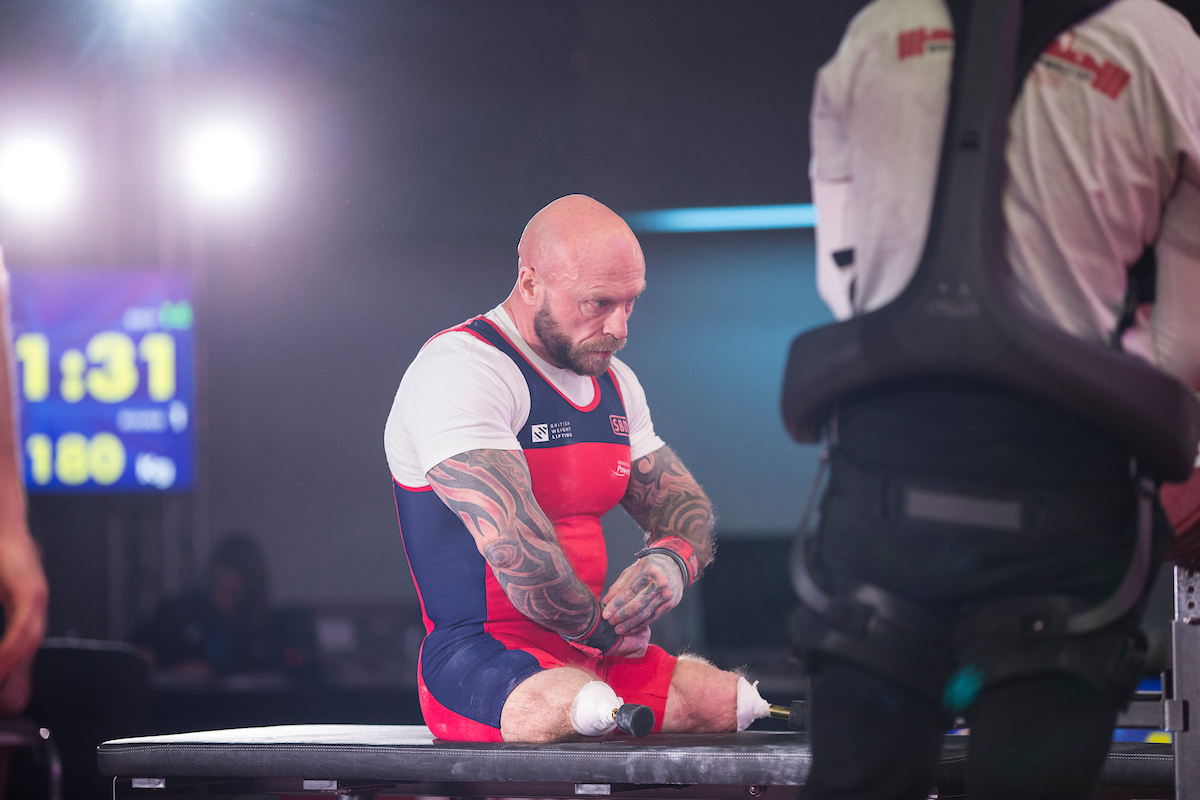 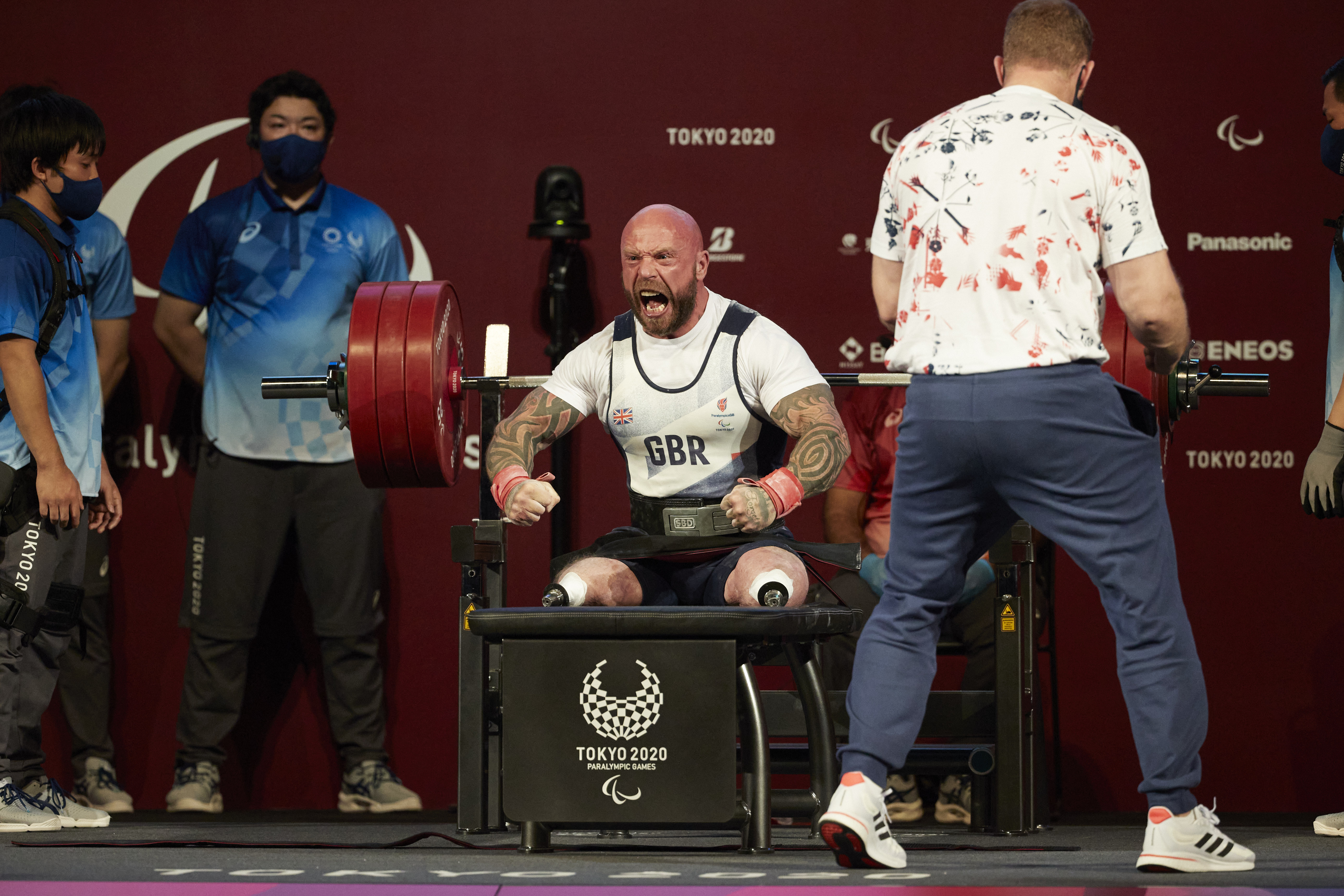 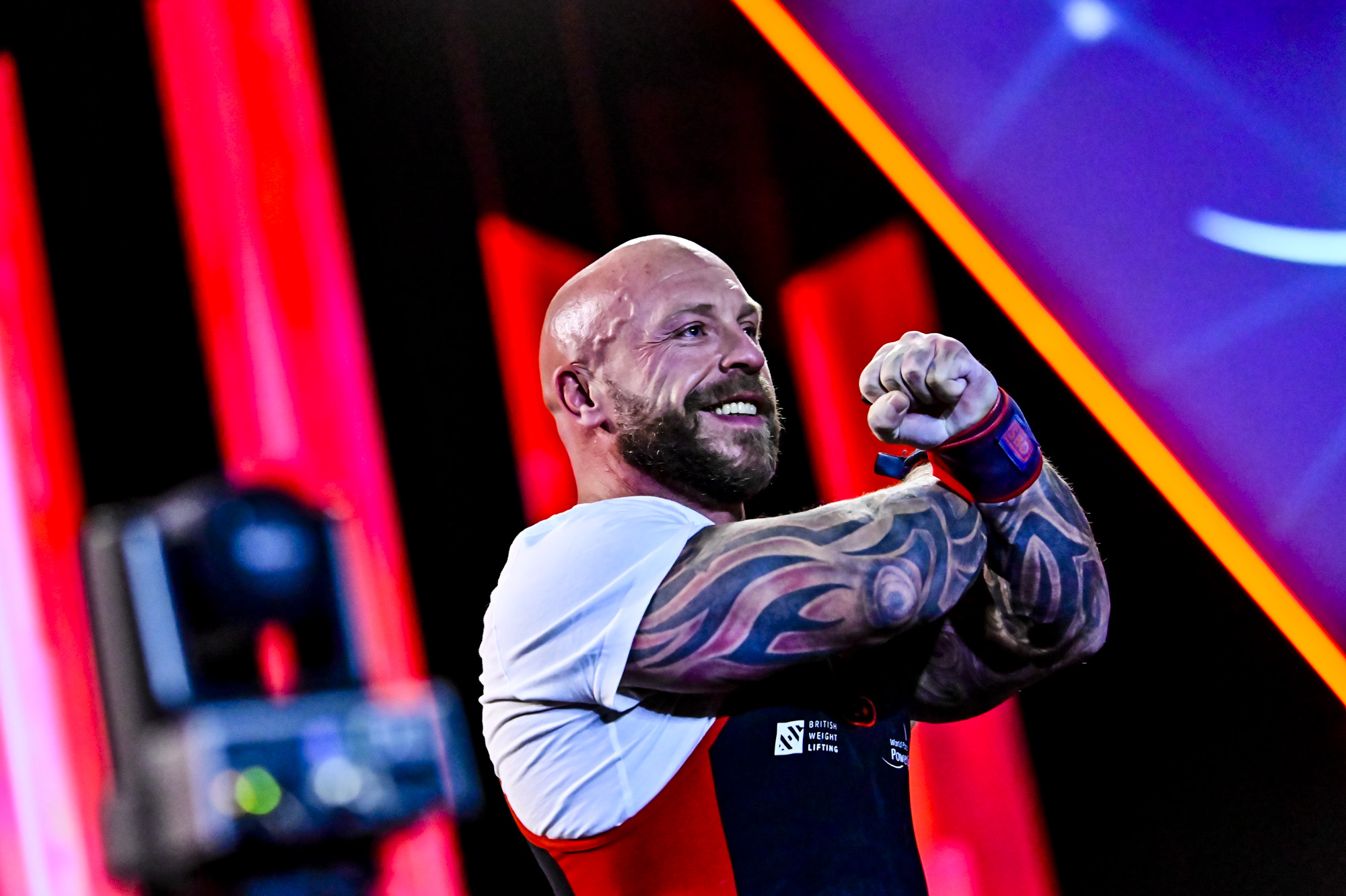 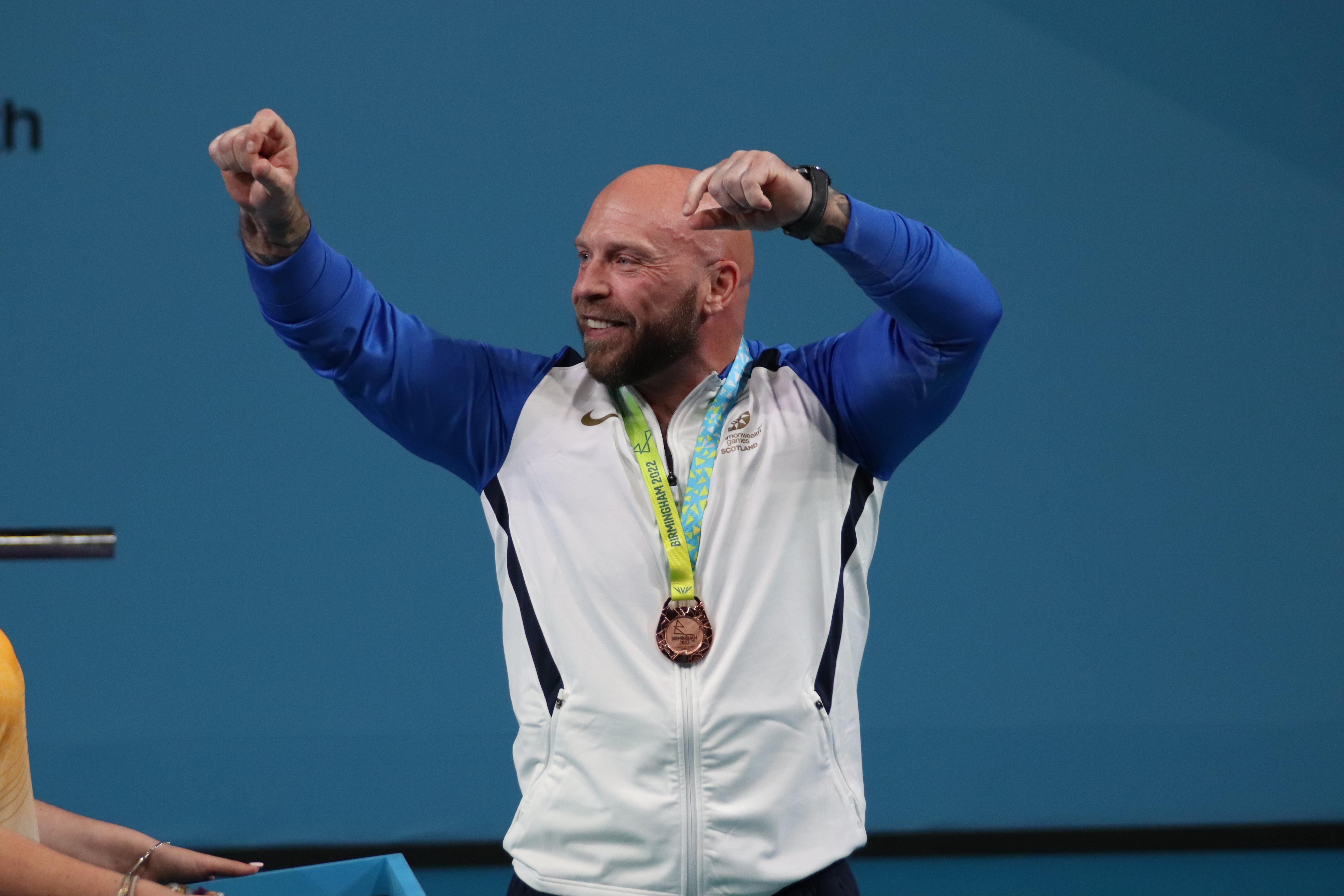