Zoe Smith got Great Britain’s European Championship campaign off to a solid start by finishing 6th overall in the 59kg class in Moscow, Russia to increase her Tokyo 2020 Robi points score and boost her qualification chances. 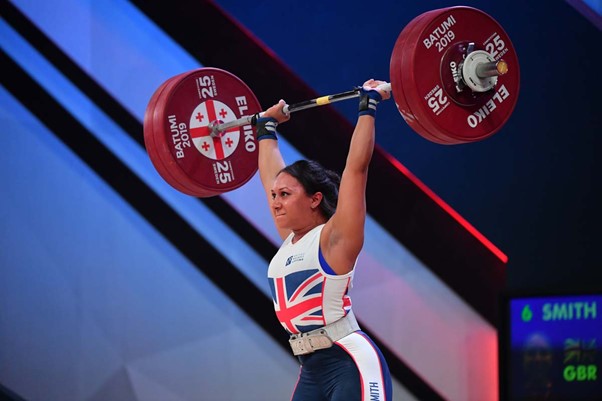 A tough session for all the athletes saw Smith snatch 89kg to take 8th at the interval, but then the 2014 Commonwealth Champion put in a hardworking clean & jerk display to lift 111kg for 6th place in her section.

That earned her a total of 200kg for 6th place overall in the final rankings. Gold went to Boyanka Kostova of Azerbaijan who lifted 211kg. A tiebreak saw Olga Te of Russia take Silver on 210kg having lifted the same weight before Dora Tchakounte who took home Bronze for France.

Smith opened with a successful effort of 87kg.  The London 2012 Olympian then upped the ante to 89kg which just got away from her, but then managed to land the same weight on her third attempt.

In the second phase Smith missed 111kg on her first attempt on a narrow two vs one decision, but then secured it with three white lights on her second go.  She attempted 114kg on her final attempt but was unsuccessful.

However, despite not medalling this time round the result in Russia more importantly saw her rack up more Robi points to boost her Tokyo 2020 qualification chances.

The dynamic Robi points system is designed to standardise performances across different categories and is based off the current World Record in each weight class.

Currently the top 8 lifters in each category qualify for Tokyo as things stand. However, the IWF are expected to amend the qualifying system to take into account the impact of Covid-19.

Prior to this event Smith was in strong contention for the final slot in the Women’s 59kg class after duplicates in multiple categories were removed.

The European Senior Championships is a Gold standard event which offers a multiplier of 1.10 to Robi scores recorded at the event in comparison to 1.05 for Silver events and 1.0 for Bronze.

Today’s result will see Smith improve her score, but the final amount and placings is dependent upon how other athletes fare as points are carried across the board for athletes who compete in more than one category.

This was the first time Smith had competed in 15 months due to the Covid-19 pandemic. Her previous outing was a low key 7th place finish at the Rome World Cup in 2020 lifting 199kg.

Smith’s participation in Russia also ensured she met the minimum requirement of appearing in six events.

Athletes are also required to appear twice in a category they intend to take for Tokyo which Smith has now achieved for both the Women’s 59kg category (twice) and Women’s 64kg category (four times).

Smith started her Tokyo 2020 journey at the 2018 World Championships in Ashgabat lifting 215kg. She then went on to win Silver at the European Championships at Batumi in 2019 and Gold at the British International Open in Coventry producing totals of 224kg and 225kg respectively.

Smith then switched to the 59kg category at the 2019 World Championships in Pattaya to maximise her Olympic qualifications chances and lifted 216kg en-route to the World Cup in Rome.

The rest of the Great Britain’s strong squad will be competing at various times later this week. Sarah Davies is scheduled to battle it out tomorrow at 3pm BST in the Women’s 64kg category.

You can watch all the action live on TV via Eurosport 2. A live scoreboard is also available to view here