Emily Campbell won three Gold medals in the Women’s 87kg+ class to become the second British Weightlifter to win a European Championship in the space of a week in Moscow, Russia to round off the most successful team performance by Great Britain since 1948. 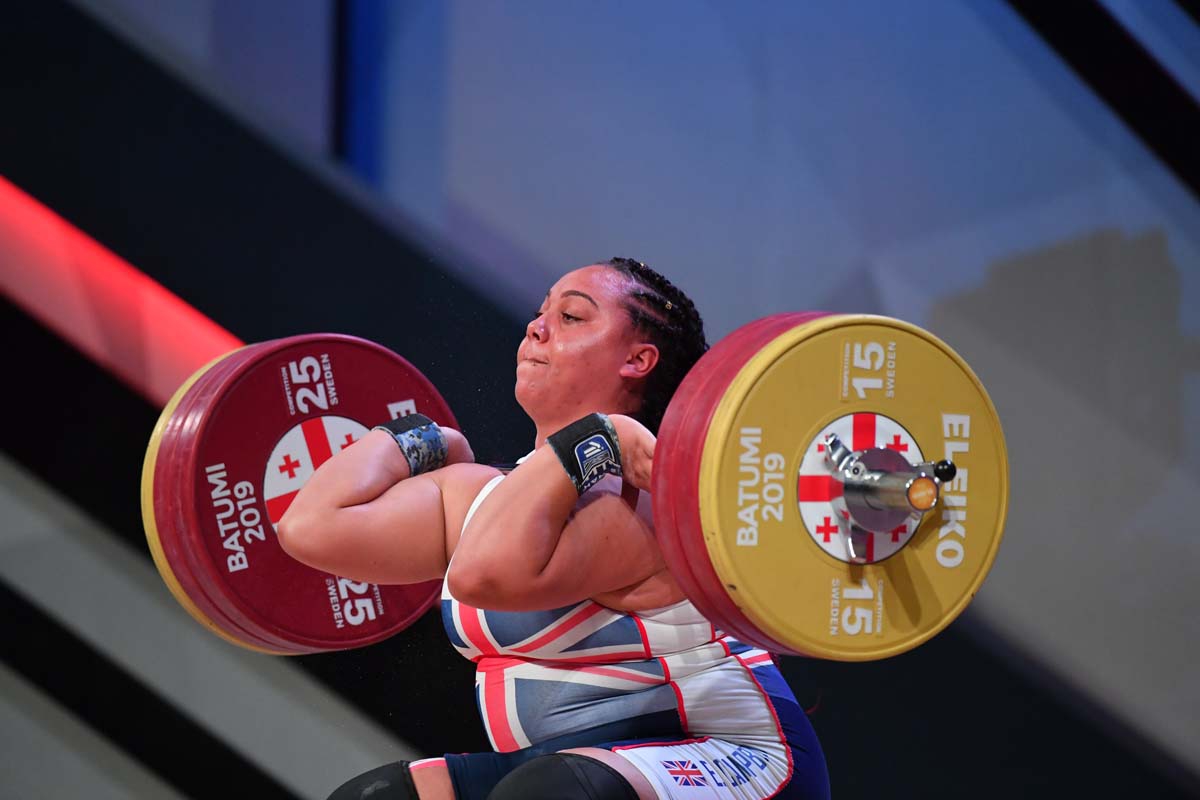 Hitting six out of six lifts, Campbell snatched 122kg to set a new British record and stormed to Gold at the interval. She then managed to produce another British record to win clean & jerk Gold lifting 154kg for a total of 276kg to wrap up the overall title as well.

That clean & jerk performance also ensured she set a new Commonwealth record in that discipline and the overall total, beating the previous benchmarks of 151kg and 275kg set by Samoa’s Feagaiga Stowers in 2019.

Behind Campbell, Anastasiia Lysenko of Ukraine took overall Silver lifting 252kg and Turkey’s Melike Gunal rounded out the podium with a total of 243kg.

Earlier this week Emily Muskett became the first British Weightlifter to win a European Championship in 26 years and only the 10th to do so in history.

Today’s performance ensured a much shorter wait and also seen Campbell become the 11th British athlete to join that exclusive list.  She also become the first British weightlifter to win a clean sweep of Gold across all three disciplines at the European Championships since Marie Forteath in 1988.

In the snatch, Campbell got off the mark with a successful effort of 115kg to take the lead. Lysenko posed a challenge by lifting 116kg on her last attempt, but Campbell easily re-took top spot with hitting 117kg and then extended her advantage with a superb lift of 122kg to set a new British benchmark.

In the clean & jerk Campbell took a comfortable victory. She was the last lifter to take to the platform and she won Gold on her first attempt lifting 145kg.

Campbell then followed that up with a brilliant 150kg for a new British total record of 272kg. For her third and final attempt she set a new British clean & jerk and Commonwealth record of 153kg for a total of 276kg.

Prior to this event Campbell was in the mix to qualify for a place in the Women’s 87kg+ competition in Tokyo.

Currently the Top 8 lifters in each category qualify for the Olympic Games alongside the highest ranked lifter in each continent.

This result in Russia saw Campbell score more points in the Tokyo 2020 qualification rankings and significantly strengthen her position having now competed in six events.

After announcing herself on the international arena by winning Bronze at the 2018 Commonwealth Games for England, Campbell started her Olympic qualification campaign at the World Championships in Ashgabat lifting 248kg to finish 14th.

She then won Bronze at the 2019 European Championships hitting 260kg, before lifting 255kg to medal at the British International Open in Coventry

Campbell lifted 267kg at 2019 World Championships in Pattaya, Thailand to take ninth and her last competition before the Covid-19 pandemic was the Tianjin World Cup where she medalled in the snatch and finished fourth overall lifting a total of 271kg.

The rest of Great Britain’s squad have also fared strongly throughout this week at the European Championships.

In terms of medals this was one of the best outright British team performances at a European Championship in history.

Great Britain won two overall Golds and one overall Silver at this year’s European Championships. When counting medals won in the snatch and clean & jerk that amounted to five Golds & four Silvers.

Only on two other occasions in history have a British team won two overall Golds at the same edition of the European Championships.

Across the three disciplines the 1988 team racked up five Golds, two Silver's and six Bronze's which has now been surpassed this year due to a higher total Silver medal tally on countback.

This places the 2021 team performance second only to the all-time high of 1948 where two overall Golds and two overall Silvers were won courtesy of Julien Creus (Gold), Jim Halliday (Gold), William Watson (Silver) and Alfred Knight (Silver).  No individual snatch and clean & jerk medals were awarded during that era which also featured the discontinued clean & press discipline as well.

British Weight Lifting would like to congratulate all the athletes, and coaches involved on this truly historic performance.

We would also like to thank UK Sport for all of their continued support through Aspiration Funding which has ensured all our elite lifters were given the best possible opportunities to qualify for Tokyo.

It has ensured that Great Britain’s leading lifters have remained on track throughout the qualifying period and British Weight Lifting is extremely grateful for the support given the challenges experienced as a result of the worldwide pandemic.