A sensational performance from Sarah Davies this afternoon saw her lift six out of six lifts to win three Silver medals for Great Britain in the Women’s 64kg class after battling against World Champion Loredana Toma at the European Championships in Moscow, Russia. 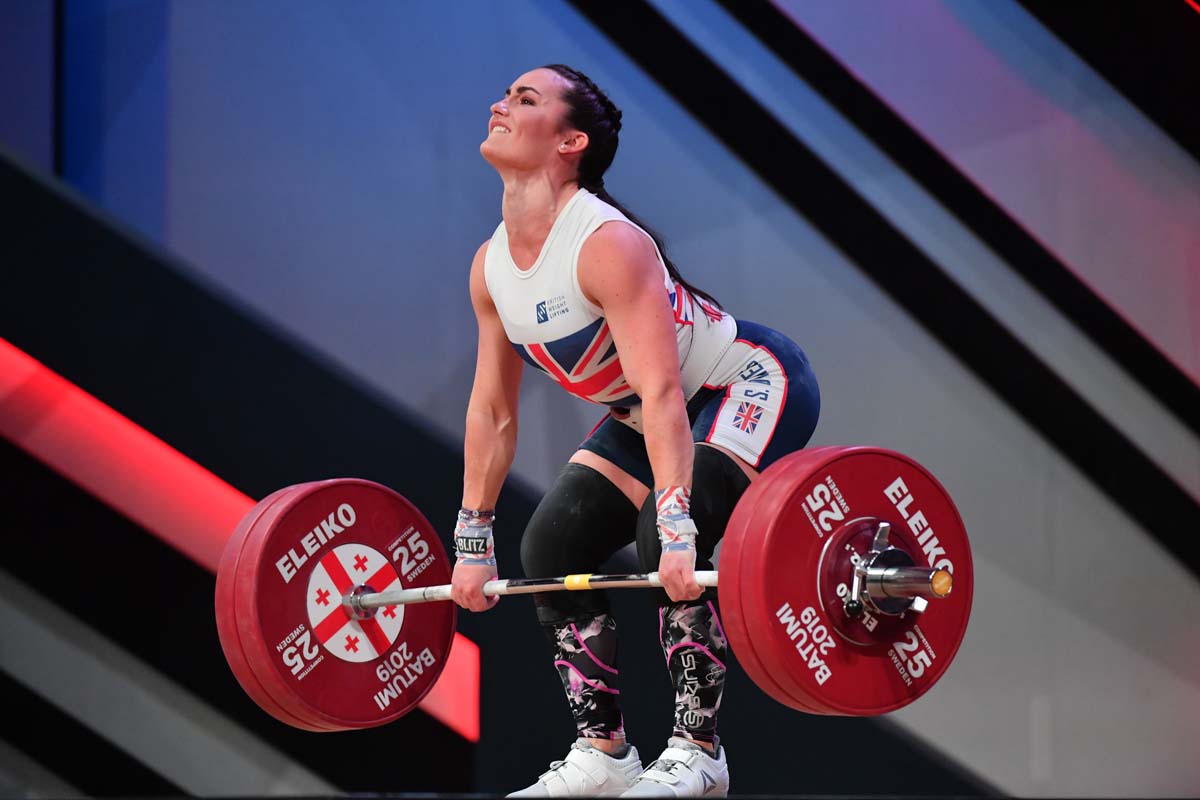 An epic duel between two of the sport’s most charismatic figures saw ‘The Barbell Queen’ go head-to-head with ‘The Tominator’ in the clean & jerk to secure her first set of senior continental medals in her career.

Davies snatched a best effort of 101kg and then clean & jerked a British record of 129kg for a record British total of 230kg to sweep Silver across the board.

Toma won overall Gold for Romania to take her fourth European title in a row with a total of 244kg while the Bronze medal went to Anastasiia Anzorova of Russia who totalled 222kg.

A strong start from Davies saw her launch 96kg into the air with ease to hit the ground running early on in the snatch.

She followed up with a superb second attempt of 98kg and then matched her own British snatch record of 101kg with successful final lift to take Silver at the interval with Toma on top with 114kg.

Davies continued her fine form into the clean & jerk section which was a more tightly contested affair hitting a good effort of 122kg on her first attempt.

She then battled through to lift 126kg on her second lift before setting a new British record of 129kg on the third lift. Toma could only muster 1kg more for Gold in that section after missing her final lift.

Today’s results ensures that she has now scored points in six Olympic qualifying events which strengthens her position in the Robi rankings used to determine qualification for Tokyo 2020.

Currently the Top 8 lifters in each category qualify for Tokyo as things stand and Davies is in good position for the final slot in her category.

The IWF are expected to amend the qualifying system to take into account the impact of Covid-19, but no athlete is expected to be negatively impacted by these changes.

Next up was a fourth-place finish at the European Championships at Batumi in 2019 lifting 223kg.

She broke the British snatch record at the 2019 British International Open in Coventry and totalled 224kg but had to settle for second overall on that occasion behind GB compatriot Zoe Smith.

Davies then lifted 222kg at the 2019 World Championships in Pattaya to finish 8th overall. She secured Bronze in the Snatch at the Tianjin World Cup in China but failed to score any Robi points there after being unable to record a total.

A training base move to Atlas Gym has seen her transform her technique under the tutelage of national coach Dave Sawyer and weightlifting veteran Cyril Martin.

She bounced back at the Rome World Cup with 5th place finish in January 2020 lifting 217kg which was the last event before the Covid-19 pandemic halted international weightlifting competitions.

Yesterday Great Britain compatriot Smith finished 6th in the Women’s 59kg competition. You can read a roundup of that performance here.

You can watch all the action live on TV via Eurosport 2, or online via the Eurosport player on Amazon Prime. A live scoreboard is also available to view here