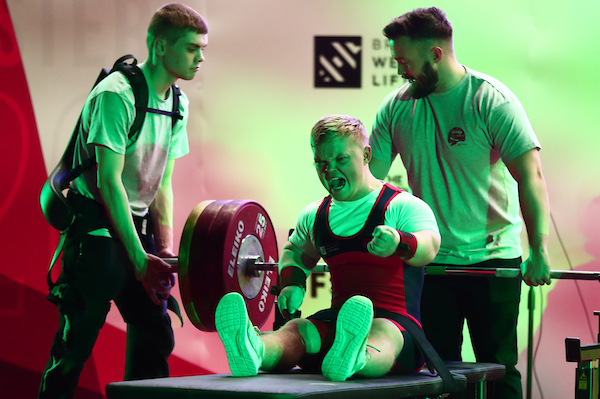 Rio 2016 Paralympic bronze medallist Dimitrios Bakochristos (Greece) kickstarted the competition by clinching the first medal of the day in the men’s up to 54 kg category but left it until his third attempt before successfully completing his 162 kg lift.

France’s Axel Bourlon had the chance to pip Bakochristos to top spot but thrice failed to complete a lift to the satisfaction of the officials. Japan’s Mitsunori Ichikawa suffered the same fate with his three attempts at 138 kg, so it was Kazakhstan’s Zakhar Buimov who picked up the silver, the 18-year-old’s 100 kg lift also earning him junior gold.

The men’s up to 59 kg category went down to the wire, with Chile’s Juan Carlos Garrido and Greece’s Paschalis Kouloumoglou both attempting a 180 kg on their third and final attempts. Neither man could deliver a successful lift so it was Garrido’s earlier second-round effort of 177 kg that saw him triumph with Kouloumoglou settling for silver.

“It was just amazing,” said Dean after the event.

“There was really good noise and a really good atmosphere. It’s been great to do it here in Manchester being a local girl, so a proper home crowd. I feel really privileged that GB selected me to compete. I’m on the talent squad, so this was a great opportunity.

“Thanks British Weight Lifting for selecting me. I guess it was worth it!”

In the men’s up to 65 kg, the good lifts came thick and fast with Marek Trykcz (Poland) taking an early lead lifting 173 kg on his first attempt. He held on to his lead for the rest of the competition, with Jorge Carinao (Chile) only 3 kg behind to take silver.

GB’s Mark Swan set a new Junior European record, not once, but twice during the up to 65kg competition, lifting 150 kg, followed by 155 kg on this third-round lift. The previous record stood at 140 kg. Swan not only secured junior gold, he was also on the senior podium after securing bronze with his 155 kg lift.

“This was my first international comp, international debut and to hit a Junior European record, I am outstandingly proud of myself for that.

“I had a rough idea of what I was going to lift and how I was going to perform on the day. It all came down to the technical aspects; if my technique was there then I knew I had the strength to back it up.”

The competition continues over the weekend, on Saturday 22 and Sunday 23 February.

Tickets will be available at the event box office from 10:30am each day (£10 adults, £8 concessions, £5 children 14 and under). For the competition schedule, please click here.

Watch the action from Manchester on the live stream here.