It has been a successful week for Team GB at the World Championships in Thailand as Emily Muskett won Britain’s first medal in over 25 years while Zoe Smith and Sarah Davies both racked up top 8 finishes in their quest for Olympic qualification. 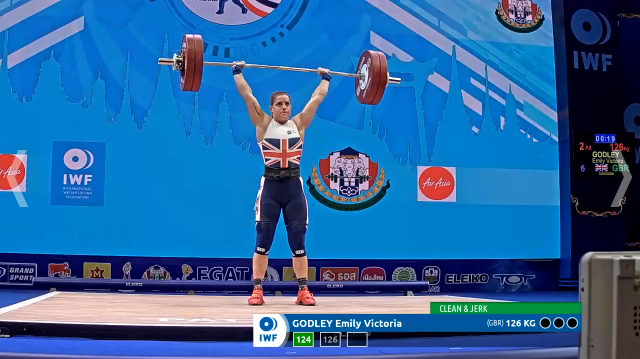 Reigning Commonwealth Champion Muskett clinched bronze in the Woman’s 71kg clean and jerk competition in Pattaya by hauling a British record of 126kg to finish third behind the American duo Katherine Nye and Mattie Rogers.

This result was a British record of 123kg which Muskett already held from the European Championships in April.

Muskett finished 4th in Thailand overall after snatching 100kg for another British record total of 226kg.  That result saw her become the 5th British female athlete in history to stand on the podium.

Prior to Muskett medalling, the last British lifter to win silverware at the World Championships was Myrtle Augee who picked up clean and jerk bronze and finished third overall at the 1994 event in Istanbul, Turkey.

London Olympian Zoe Smith finished 6th in the Women’s 59kg class after dropping down a division to maximise her Olympic chances.

To qualify for Tokyo 2020, athletes are required to be within the top eight of the world rankings or be the number one on their continent and before the World’s Smith was sitting 7th in the Women’s 64kg table.

The European Bronze medallist snatched 93kg then clean & jerked 123kg for a total of 216kg - a trio of new British records.

Sarah Davies also finished 8th in the Women’s 64kg class. The Commonwealth Silver medallist snatched 98kg and then clean and jerked 124kg to finish on 222kg.

“We are absolutely delighted with the results that have been achieved so far. This has been one of the best team performances recorded by a British squad in the past 50 years. Throughout the week we have seen some fantastic displays from our athletes, and it is brilliant to see all their hard work paying off. We would also like to thank UK Sport and the National Lottery for continuing to support weightlifting via their aspiration fund which has helped to make this success possible. Some of our athletes are still set to compete over the coming days and we can’t wait to see how they get on.”

European 87kg+ bronze medallist Emily Campbell is due to compete on the 27th of September.

A full roundup of the event will be released once the competition has concluded.