Congratulations to the seven athletes that have been selected to represent Team Wales at the 2022 Birmingham Commonwealth Games. 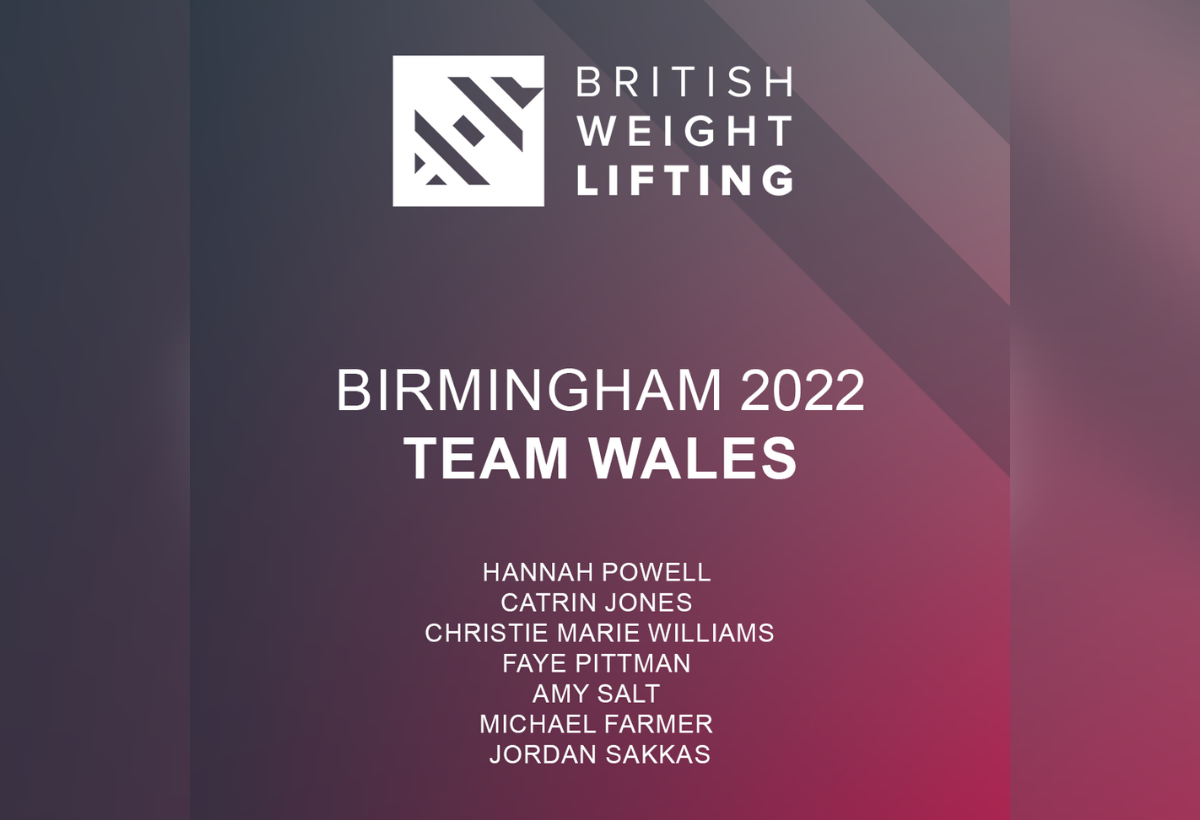 Hannah Powell is currently ranked second in Wales and ninth nationally in the women’s 49kg class. Hannah’s best in competition total as a 49kg lifter is 158kg, after a 71kg snatch and a 87kg clean and jerk at the 2019 British International Open.

Catrin Jones is currently ranked number 1 nationally in the women’s 55kg category. Catrin’s best in competition total is 188kg, which she made at the 2021 British Championships after snatching 83kg and clean and jerking 105kg.

Christie-Marie Williams is top ranked in Wales and second in the UK in the women’s 64kg category. Christie-Marie’s best in competition total as a 64kg lifter is 186kg after a 86kg snatch and 100kg clean and jerk at the 2020 Welsh International Open.

Christie Marie on her selection “This will be my third games and it’s just as exciting as the first time I was selected. It’s such an honour to put on that Welsh suit. It’s all about putting in the work to place the best I can, I’ve had a bit of an unlucky streak since covid and have had two serious injuries that put me out of all qualification events and with 3 weeks of training I managed to pull it out of the bag at the British Championships 2022 to make a total that qualified me for the 2022 Commonwealth Games!’

Faye Pittman is top ranked in Wales in the women’s 71kg class. Faye’s best in competition total as a 71kg lifter is 204kg from the 2021 Welsh Open Series after snatching 92kg and clean and jerking 112kg.

Amy Salt is ranked number 1 in Wales and fifth in the UK in the women’s 76kg category. Amy’s best in competition total is 201kg which she made both at the 2021 Welsh Senior Championships and the 2022 British Championships.

Amy has said on her selection “It doesn't feel real yet to be honest. I have been training towards going to the commonwealth games for 8 years and I'm honoured to have been selected to represent Wales. It means the world to me. Training is going the best it ever has, gaining this bodyweight has made a huge difference and I have been continually hitting PBs in training! It can be difficult working full time and training, but I'm so passionate about weightlifting and competing for my country it pushed me to keep going. My goal for the games is to hit a PB total on the platform, I'm hoping for a 120+kg clean and jerk, away from the numbers my other goal is to inspire other girls to take up our sport and show you can be feminine and strong!”

Michael Farmer is top ranked in Wales in the men’s 73kg class. Michael’s best in competition total as a 73kg lifter is 294kg, from a 134kg snatch and a 160kg clean and jerk in the 2021 Welsh Senior Championships.

Mikey said on his selection “I am feeling very excited for the games, especially as it’s so close to home. I almost want this period of time to speed up to get on that platform, but also slow down so I have more time to prepare!

I am feeling more than ready for my first major games. I have clear goal of attaining a medal on the 31st July, it is everything I have been working towards for the past 4 years and I am looking forward to letting my hard work speak for itself on the platform.”

Jordan Sakkas is currently top ranked in the UK in the men’s 109kg category. Jordan’s best in competition total is 335kg, which he made at the 2021 Welsh Senior Championships after snatching 128kg and clean and jerking 187kg.

British Weight Lifting would like to congratulate all athletes selected and wish them all the best in training in the lead up to the Birmingham Games.