Ali Jawad struck up Silver for Great Britain to boost his chances of qualifying for the Tokyo 2020 Paralympic Games with a stunning performance in the Men’s up to 59kg competition at the Tbilisi World Cup in Georgia. 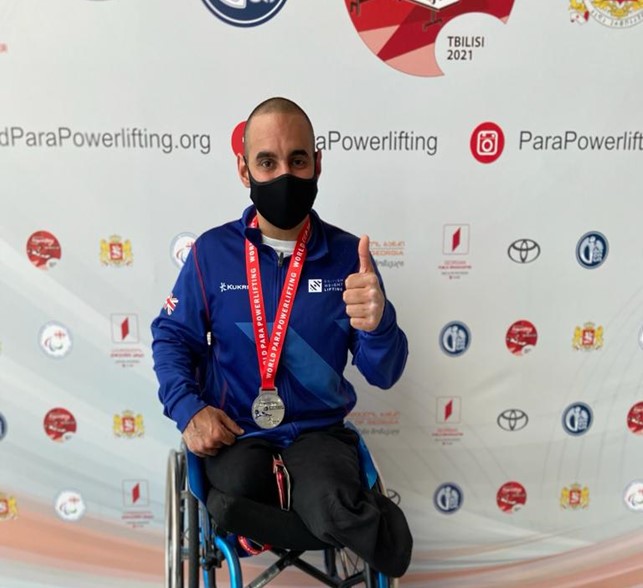 The 2016 Rio Silver Medallist successfully lifted all three of his attempts and produced a best lift of 170kg on his quest to qualify for a 4th Paralympics.

That result moved him up into the Top Eight in the Men’s up to 59kg category which is where he needs to be to qualify for Tokyo.

Speaking after the event on Twitter Jawad said:  "I gave it absolutely everything.

"My first ever medal in a World Cup to give myself a chance of Tokyo 2020, producing my best performance since Rio 2016.

"What a long road it’s been fighting Crohn’s disease, but today I won the mini battle!

"Now to potentially win the war in Tokyo."

Gold went to Juan Carlos Garrido of Chile on 180kg while Bronze went to Greece’s
Paschalis Kouloumoglou on 163kg.

Jawad started the day with an effort of 165kg. He then upped the ante to 168kg before going from strength to strength with his strong finisher of 170kg.

It was a technically impressive performance by the 2014 World Champion. He secured eight out of nine white lights from the officials across all his lifts, with just one solitary red on his second attempt which was still given on 2 v 1 majority decision.

It is a welcome return to the podium for Jawad who narrowly missed out in Manchester by 1kg, finishing 4th behind Tomczyk on his comeback with 161kg.

Jawad also currently sits 7th in the Men’s 54kg class, having competed in that additional category earlier in the qualification cycle.

He lifted 165kg at Beck Sur Mur in 2018 to hold a 4kg advantage over next placed lifter Axel Bourlon. A session in that category is due to take place later today.

It has been a successful week for Great Britain so far. Yesterday Zoe Newson won Gold lifting a new British Record, while teammate Olivia Broome set a new British Record and Junior World Record later in the afternoon to clinch Junior Gold and Senior Silver.

You can catch-up on all the Day one action here.

Tomorrow GB Teammate Louise Sugden will take to the platform on Saturday in the Women’s up to 86kg competition.