Sisters from Henley-in-Arden have been crowned national champions and record breakers for weightlifting. 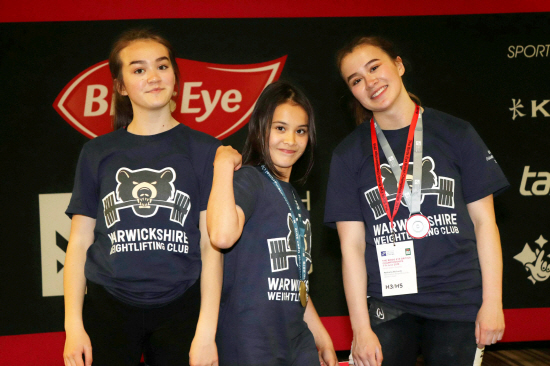 Nathalie Richards, 16, and sisters Charlize, 13, and Keira, 12, started working out after becoming inspired by their gym-going dad Leighton.

They all joined the Warwickshire Weightlifting Club three years ago and now train at least three times a week.

The trio started entering competitions and have all won national championships for the ‘snatch’ and ‘clean and jerk’ categories.

Nathalie and Charlize have even broken weightlifting records, making them the strongest girls in the UK in their age group.

Leighton, 43, has even converted the family’s garage into a gym for the girls so they can top their training at home.

Nathalie has won two British Weight Lifting championships as an under-15 in the 64kg bodyweight category.

Now she competes as an under-17 category in the 71kg bodyweight level.

The record she set in February was 147kg based on the weights she lifted in both the ‘snatch’ and ‘clean and jerk’ sections of the competition.

Charlize is also a British champion in the under-15, 59kg category.

The record she set was 55kg in the ‘snatch’ part of the competition in June.

Keira isn’t allowed to compete until she is 13. But she would be a British champion if she was a year older, based on the weights she is lifting.

The sisters now have an eye on competing in the European championships and Nathalie hopes to try out for the British team in the 2022 Commonwealth Games.

Nathalie said: “I think my main strengths are all round strength and technique.

Charlize said: “Weightlifting is just really fun to do. When you lift the bar it improves your confidence. It helps me as a person.

“My goal is to see how far I can get with weightlifting and compete at an international level.”

Keira said: “I love weightlifting. It keeps you occupied. I am looking forward to getting to the age where my results can be officially recorded.”

Dad Leighton, 43, who works in software, competed internationally in judo for Wales.

Leighton, who is married to May, 43, a project manager for the National Grid, was confident the girls would succeed from the beginning.

Leighton said: “I am very proud and very happy.

“The national success isn’t the most important thing. I wanted them to be involved in sport. It’s more about health and self-esteem.