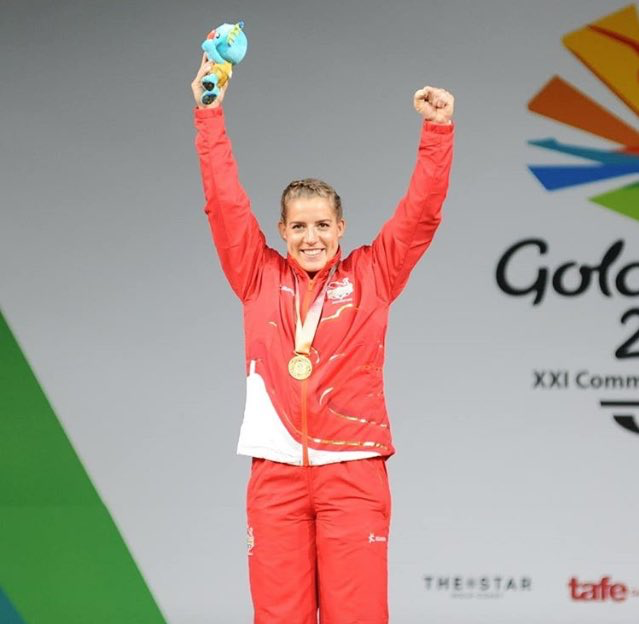 Emily Godley, secured gold by a kilogramme in the 75kg category, with Hughes third.

Sarah Davies, who was in a four-way tie for bronze at the halfway stage, came through to take 69kg silver.

“The pressure was fully on, I didn’t even know what weight was on the bar, I just knew I had to lift it, it feels amazing to be on top of the podium, I can’t ask for more, I feel like I’m dreaming actually. It hasn’t sunk in properly yet. I’ve been training and gaining body weight sine I finished 4thin Glasgow and it’s paid off, this is what I’ve dreamt of and I have just accomplished it.”

Davies completed a 128kg clean and jerk attempt in her final lift to finish with a total of 217kg, five off Punam Yadav of India, who won gold.

It was an excellent performance from Edmon Avetisyan, who finished 4thin the Men’s 94Kg final, he commented,

“Finishing 4th in my first commonwealth games, PB total for me, there is nothing else I could ask for really. Beat my PB by about 5 Kg.

“It’s my first Commonwealth Games and it’s been excellent, just coming out here is just a big pleasure, it means a lot. To prepare for the games I spent a lot of time training by myself and also for the past eight weeks I asked one of the GB coaches to coach me and my performances improved massively.

Scott Wilson of Scotland finished 7th with a total of 311kg and Stephen Forbes of Northern Ireland registered a total of 277kg to finish 9th.