European Youth Championships Round Up

16-year-old, Welsh record holder, Ellie Pryor was the first of the team to compete in the Youth W53kg category. Ellie successfully snatched 58kg after missing her third attempt at 60kg and combined with her 73kg clean & jerk, finished the competition with a total of 131kg. 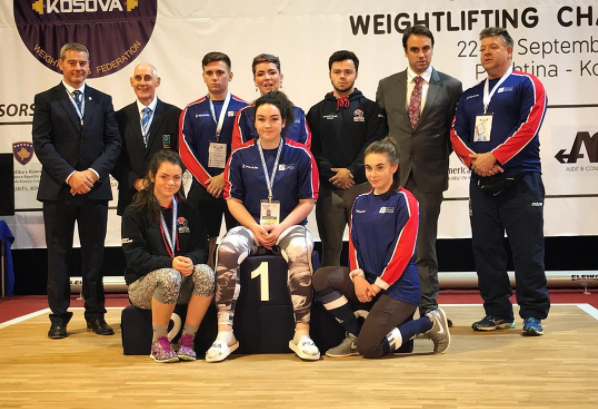 Scottish lifter and Commonwealth Youth Bronze medallist Rowan Morrogh Bernard lifted in the Youth W58kg category with a 61kg snatch and a close missed attempt at 64kgs. The 17-year-old successfully clean and jerked a personal best of 83kg and equalled her personal best total of 141kg.

The youngest of the Morrogh Bernard siblings, Holly Morrogh Bernard was the final lifter of the Great Britain contingency to lift at the European Youth Championships. The skilful 15-year-old finished her lifts with a combined 138kg total.

British Championships bronze medallist and Commonwealth Youth silver medallist, M77 lifter, Jason Epton took centre stage with an unfortunate miss with his opening snatch of 118kg followed by 2 successful lifts at 118 and 122kgs. The Scottish lifter clean and jerked an effortless 150kgs, allowing him to total at a comfortable 268kg.

Commonwealth Youth Champion, Daniel Richardson competed in the M85 category with 2 good lifts at 105kg & 110kg followed by a closely missed attempt at 113kg. After a successful clean and jerk of 135kg, Richardson ended his competition with a total of 245kg.