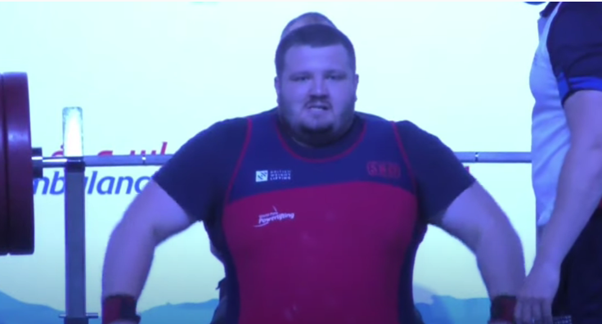 McGarry lifted 210kg to beat his own previous benchmark of 202kg from the 2021 Manchester World Cup earlier this year.

The GB International missed his opening attempt of 210kg, but managed to nail the same amount in the second round after a successful technical challenge overturned an initial 2 v 1 decision against the lift.

That ruling by the Jury meant McGarry was able to rightfully pose a threat to the medal contenders at the front of the world class field.

He attempted 220kg on his final lift, but was unsuccessful. However, McGarry still came away with a very strong result in the final qualifier before the Tokyo 2020 Paralympics which featured some of the sports best heavyweight athletes.

A fast rise through the ranks means McGarry isn’t eligible for Tokyo qualification via the standard top 8 pathway, but his recent performances place him in strong contention for a bipartite wildcard.

McGarry has shown magnificent progress in the last 18 months. He won Bronze at the 2020 Manchester World Cup lifting 185kg and took Silver earlier this year with his record breaking 202kg effort.

His attempt at 220kg demonstrates that there is plenty of desire and potential, showcasing that he is one to watch for the future.

Earlier this week Mark Swan won Junior Gold and Senior Bronze in the Men’s up to 65kg category while Micky Yule successfully defended his Tokyo top 8 position by finishing sixth on the day.