Olympic Weightlifting is considered as one of the greatest tests of strength and power, and competitions are the stage on which the sport comes to life. Here is a quick guide to a weightlifting competition. 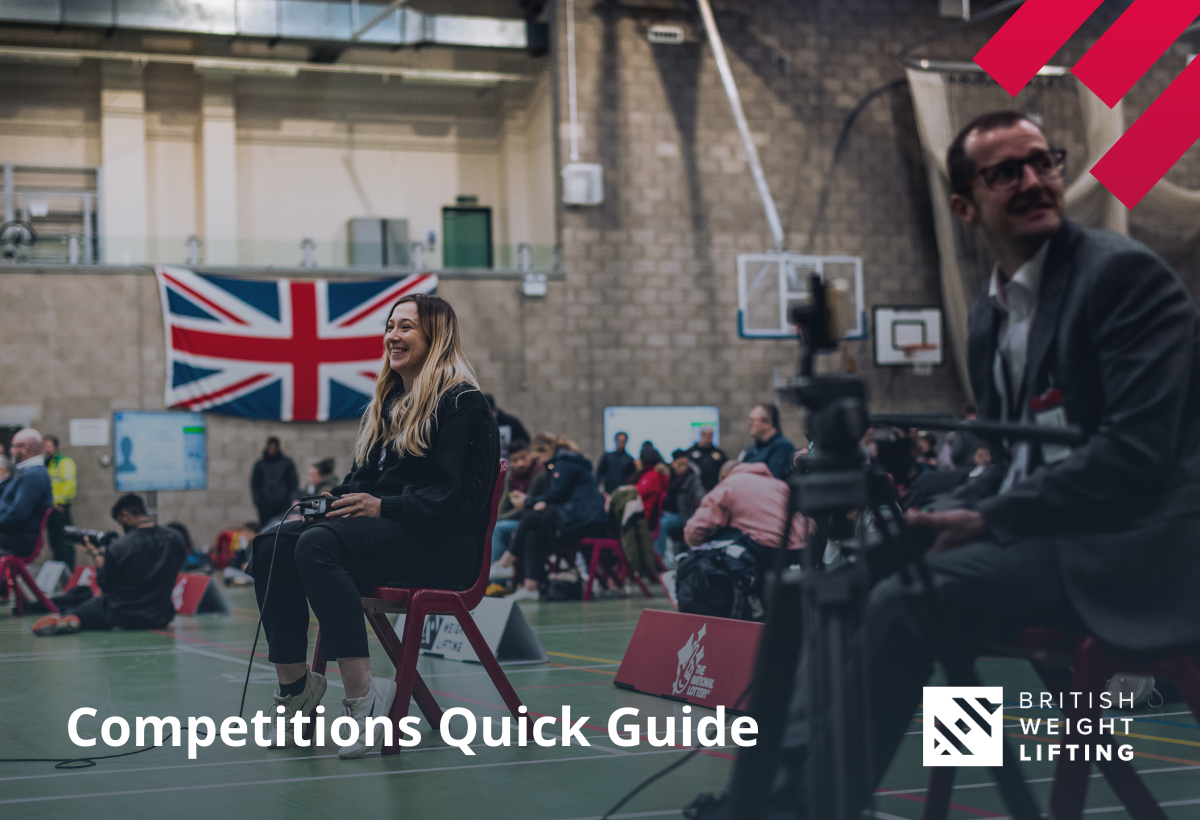 Did you know that weightlifting competitions have bodyweight categories? This is to make sure the competition is fair. For example, a 67kg lifter wouldn’t go head to head with a 109+kg  lifter, but rather another fellow 67kg lifter.

Prior to competition, when an athlete fills out an entry form, they will be asked which bodyweight category they wish to compete in. There are 10 categories to choose from.

On competition day, athletes will have to weigh in. The weigh in usually takes place 2 hours before athletes are due to lift. Athletes need to bring photographic identification and they may be weighed in either completely undressed, partially dressed, or fully dressed in lifting costume. Footwear and watches must be removed. Lifters are entitled to wear jewellery, hair adornments and religious head wear during weigh-in.

To find out more, you can read the ‘Technical and Competition Rules and Regulations’.

Warming up & the back room

Competing athletes and their coaches are allowed in the back room. Prior to competing, when an athlete fills out their entry form, they will be asked to name their coach. Coaches must be level 2 certified and this will be checked on the day of competition. Coaches will be asked to show their coaching license, and will be given a wristband so they can enter the warm up room with athletes.

Once you enter the back room, expect to see platforms, weights, and a crowd of coaches around the competition board, estimating the time their athletes have before going out onto the platform.

Picture this: You have signed up to your first competition, you have trained hard, and as the day approaches you just have one thing on your mind…What do I wear?

At tier 1 and tier 2 competitions lifters must wear a singlet (weightlifting costume/leotard). Singlets must be one piece, collarless, and must not cover the knees or elbows. Singlets can be any colour.

A unitard, t-shirt, shorts, or leggings may be worn under a singlet. If opted, these must be tight fitting, collarless, any colour but not patterned, and may cover the elbows and knees. (The exception here is shorts, these must not cover the knees).

If athletes are competing at a tier 3 competition, they can substitute a singlet with a t-shirt and shorts

Athletes may choose to use a belt in competition. Belts must be worn on the outside of the costume and must have a width not exceeding 12cm.

Our favourite singlet is the Eleiko’s ‘Raise Lifting Suit’. Eleiko also have a range of weightlifting belts to choose from to suit your needs.

To find out more singlet guidance, along with rules around footwear, bandages, gloves, and prosthetic limbs, you can read the ‘Technical and Competition Rules and Regulations’.

After a lift, 3 technical officials vote the lift as a ‘good lift’ (white light) or a ‘no lift’ (red light)

Here are some common reasons you may get a no lift:

You can find the exhaustive ‘incorrect movements’ list in the ‘Technical and Competition Rules and Regulations’.

We’ve all done it. Looked at the board at a competition and pretended we understood what was going on. Here is a little breakdown to help you along:

Green squares indicate "good" lifts, once an athlete secures a “good” lift, they will have to increase the weight by at least 1kg for their next attempt.

Red squares show "no" lifts. If an athlete misses a lift, they can repeat the weight or increase the weight.

The athlete will receive a total when they have recorded at least one successful attempt in both the Snatch and Clean & Jerk.

If an athlete fails to record at least one successful attempt in either the snatch or clean & jerk a DSQ symbol will appear, and they will not progress in the competition.

The total is made by adding the lifters highest successful Snatch and Clean & Jerk attempts together.

The lifter with the highest total will win the competition. If two people are tied, then the winner is the person who achieved the total first.

Want to find out more about our competitions?

Why not head over to the competition section of our website where we go into more detail about competitions, provide the British Weight Lifting competition calendar, detail the results, rankings and records plus find out more information on each of the major competitions running at the moment.