Two British Weight Lifting (BWL) home nation weightlifters have been selected by their respective Commonwealth Games Association (CGA) to serve as their flag bearer at the Opening Ceremony of the Birmingham 2022 Commonwealth Games on 28 July. 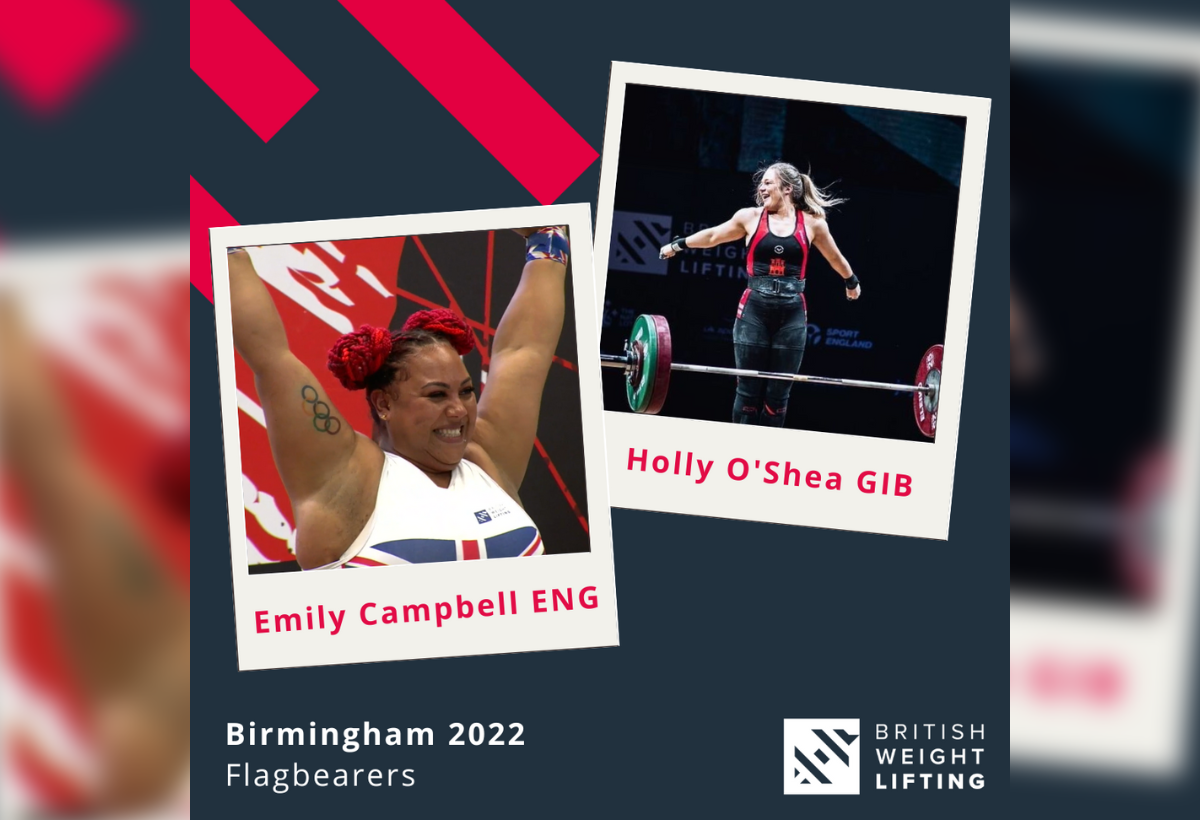 Emily Campbell will fly the flag for Team England. Emily is already a Commonwealth medallist after securing bronze at the Gold Coast 2018 and for these Games, she is ranked no. 1 in the Commonwealth and will compete in the women’s 87+kg category on Wednesday 3 August.

Campbell made history at the Olympic Games Tokyo 2020 by becoming the first British woman in history to medal in weightlifting with silver. Furthermore, Campbell is a dual European Champion and medallist from the 2021 World Championships.

Emily Campbell has commented on being selected “I am extremely honoured to have the opportunity to fly the Team England flag high at the opening ceremony of the Birmingham 2022 Commonwealth Games.

It makes it so much more special that I get to do it in front of a home crowd on Midlands soil! It really doesn’t get any better than that.

Being the first female weightlifter and the first weightlifter to be flag bearer since the legend Precious Mackenzie in 1974 has me bursting with pride and I hope this moment will inspire other young girls to chase their dreams whether that’s in sport or anything else they have ambitions of becoming.

I really can’t wait to get out there with the team!”

In parallel, Holly O’Shea will fly the Gibraltar flag. Holly is set to be Gibraltar's first ever weightlifter at the Commonwealth Games and will compete in the women’s 71kg category on Monday 1 August.

Holly O’Shea commented, “I am so overwhelmed and incredibly honoured to have been selected to be a flagbearer for Team Gibraltar.

I absolutely cannot wait to lead this super talented team out & raise the flag high for the nation.

It has been a real journey through this qualification period, from training in -3 in the garage through Covid-19, to finding my feet in competition, to organising and jetting off to compete in Uzbekistan by myself.

Thankfully I've had incredible support along the way that I will be forever grateful for. Thank you to everyone who has played even the smallest part in this journey, I hope I am able to make you proud.”

Matthew Curtain, British Weight Lifting CEO, has commented “We are thrilled with the selection of Emily Campbell and Holly O’Shea as flag bearers for the opening ceremony of the Commonwealth Games.

We congratulate both athletes wholeheartedly as Emily and Holly are leading role models across our diverse membership.

Indeed, such accomplishments will certainly inspire the next generation of athletes as BWL looks towards future Commonwealth Games”.

For more information on the Commonwealth Games, the schedule of when our athletes will lift and more, please visit https://britishweightlifting.org/competitions/commonwealth-games