The British Age Group Championships took place this weekend at the Oldbury Academy in Birmingham. The Tier 1 competition saw in excess of 60 records broken. 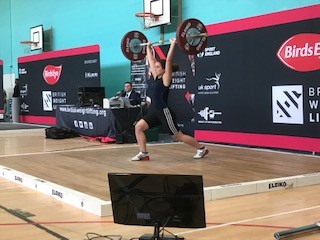 With 143 lifters taking part, here are some of the highlights:

In the Men’s category, Benjamin Hickling from EPL Weightlifting Club competed in the Men’s 55kg, under 17 age group and set a new British Senior record with a 102kg Clean & Jerk. He also achieved a record 178Kg Total for the under 23’s.

Omar Keshta from Brunel University Weightlifting competed in the Men’s 102kg, under 23 category and broke all 3 of his own records set just a week earlier with 137Kg (Snatch), 180Kg (Clean & Jerk), 317Kg (Total)

In the Women’s category Isabella Brown from Brunel University Weightlifting competed in the Women’s 71kg, under 15 age group and achieved new records with 70kg (Snatch), 92kg (Clean & Jerk), 162kg (Total) for the under 20’s.

And finally Deborah Alawode (Women’s 71Kg, Under 23’s) Stars For The Future extended her own records set from the week before at the BWL South Open Series with 105kg (Clean & Jerk), 186Kg (Total)

‘The British Age Group Championships has again showcased the incredible talent at the grassroots level of weightlifting as well as the next crop of British international lifters.

With a near record entry and a fantastic atmosphere throughout the competition, our young lifters have set over 60 national records in addition to countless individual personal bests.

I’m delighted and encouraged that this demonstrates the bright future of weightlifting and is a testament to the quality of lifters, coaches and the wider weightlifting community in this country.

I hope all the competitors enjoyed their experience at a national championships and wish them all the very best of luck as they continue their hopefully long and successful weightlifting careers.’

The results from this competition can be used for qualification to any weightlifting competition in the country.

For a full set of results, please click here