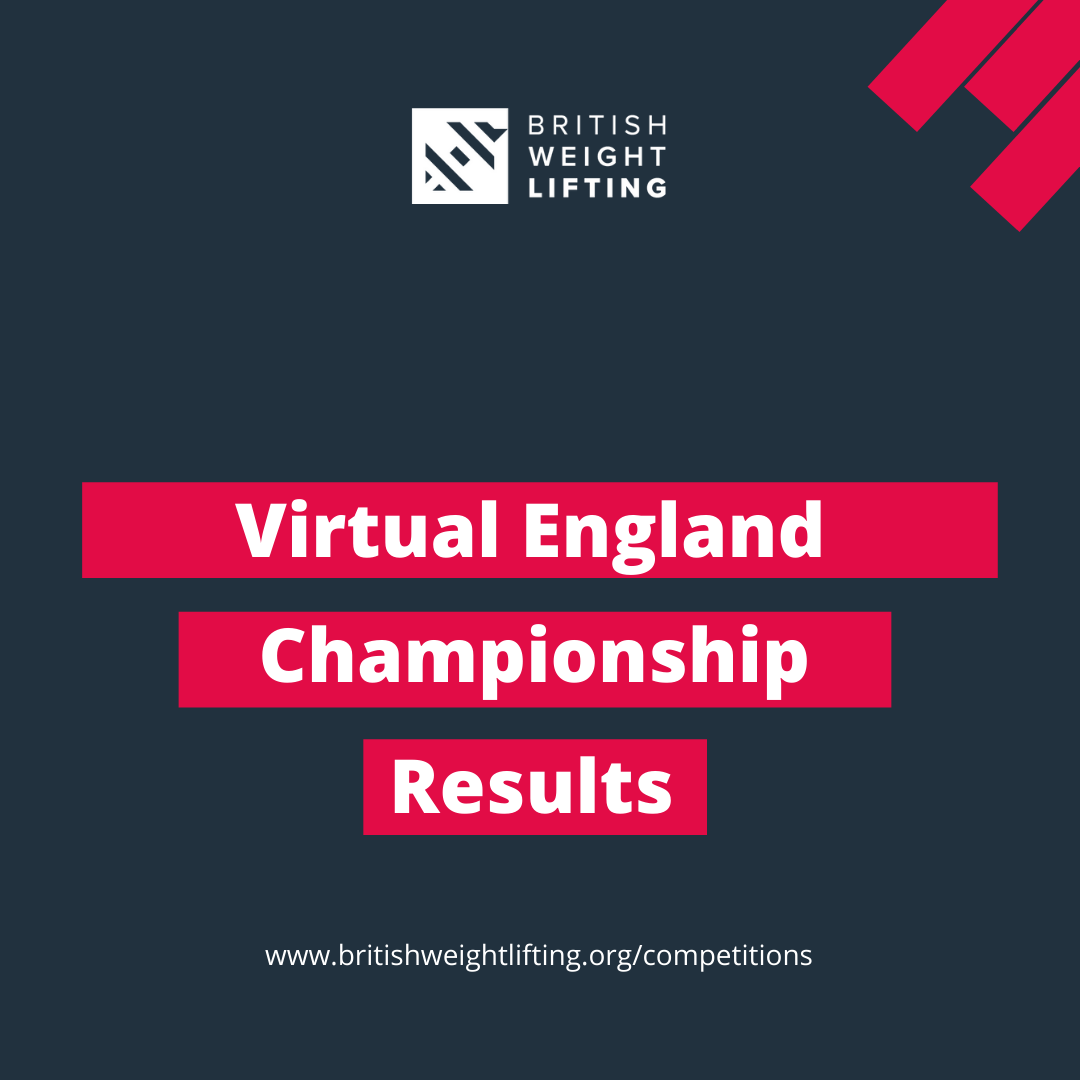 The Virtual England Championships featured amazing participation at every level from development lifters to master’s and elite athletes and acted as the first step on the journey for English athletes looking to represent their nation on home soil at the 2022 Birmingham Commonwealth Games.

A strong cohort of over 70 talented lifters battled it out to secure a place on the 30-strong England Weightlifting Training squad. These performances were reviewed after the event by a selection panel and an official announcement on the squad composition will be forthcoming.

The largest total in the Men’s Senior events was 340kg which was shared by two lifters: Gordon Shaw (M109+) and Cyrille Tchatchet (M102). That resulted in a maiden title for Shaw and a fifth successive English crown for Tchatchet who is in contention for the Tokyo 2020 Olympic Refugee team.

The biggest total in the Women’s events was recorded by European Medallist Emily Campbell (W87+). She produced a spectacular effort of 272kg for a well-deserved fourth English Championship win.

When taking bodyweight into account, Campbell’s Great Britain teammate Sarah Davies (W64) had the highest Sinclair score among the female competitors with 285.9 points. ‘The Barbell Queen’ lifted 219kg in her category to clinch her fourth English crown. Chris Murray (M81) produced the highest Sinclair score of the entire competition lifting 315kg to earn 384 points en-route to his third English title.

There was also triple title success for Jonathan Chin who showed a good step in performance lifting 290kg to finish ahead of Gold Coast Medallist Jack Oliver.

Weightlifting veteran Chris Freebury (M67) secured an eighth Senior English title. He won his first back in 2007 demonstrating his consistency on the national scene over the years.

The master's events featured some resolute weightlifting displays from the countries most experienced lifters over the age of 35. When it came to the highest SMF scores, David Hodge was top in the Men’s categories (40-44 M85) as result of lifting 222kg while Heather Burt (35-39 W64) was best in the women’s event lifting 168kg.

There were some fantastic close-run battles among the development and youth age group categories. The closest competition was between Hallam’s Alexandra Adams and Jersey’s Gabrielle Proper (U15 W45). They were level on 80kg with the latter taking the title on a tiebreak having hit the total first.

Great Britain’s Youth International athletes fared well with Emily Sweeney (U17 W81), Stefano Cataldi (U20 M89) and Elli McEvatt (U15 W64) all winning their respective categories with strong performances building off the back of a successful IWF Online Youth World Cup competition last year.  There were also strong performances from Jacob Finnigan (U20 M73) and Myren Madden (U20 M96) who competed at the 2019 World Youth Championships.

It is important for us to acknowledge that the surge in entries led to some technical issues occurring. These had not occurred in any previous virtual event or test. They have since been identified and resolved, but we would once again like to apologies for the inconvenience caused. We have put in place procedures to ensure that these issues do not happen again.

In the context of judging entries, The Virtual England Weightlifting Championships was run as a national championship. After the closure of the submission period, each of the lifts was independently judged by three licensed technical officials external to the organisation to ensure that the high standards of officiating expected at in-person events were replicated.

While we strive to get the results out as soon as possible, the delay in publication was to ensure that this process could be carried out accurately and correctly with stringent checks and safeguards. We would like to thank all of the competitors, coaches and technical officials for their efforts and patience.

The virtual competition provided a great opportunity to give people a chance to get on the platform despite government restrictions as a result of Covid-19. BWL is continually striving to find opportunities for everyone to participate in the sport.

A copy of the results from the 2021 Virtual England Championships are available to view by clicking the links below. For the purposes of Age Groups, lifters have been ranked in the category indicated on their entry form providing they meet eligibility criteria, unless otherwise indicated.

The table below lists the recognised national champions for the 2021 Virtual England Championships in each weight category.