Great Britain dominated the men’s up to 72kg category and recorded a 1-2 finish on the podium as Micky Yule took gold and Nathaniel Wilding secured silver to extend the hosts lead at the top of the medal table on Day 3. 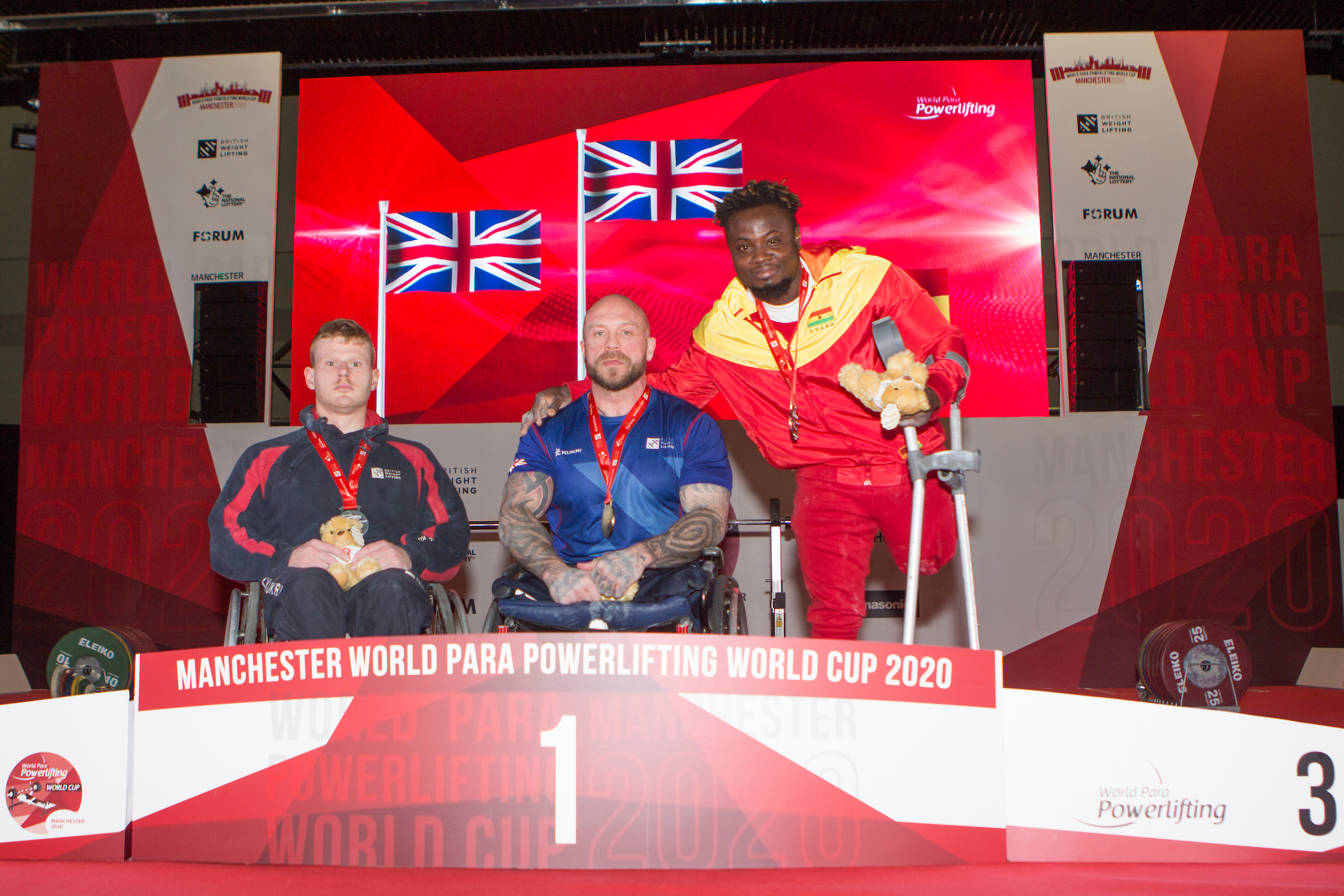 Gold medallist Yule established an early lead in the first event of the day hauling 180 kg on his first attempt, following up with a good, clean 182 kg lift and an unsuccessful 185 kg effort. Wilding’s first lift of 175 kg was enough to secure silver as Italy’s Donato Telesco was unable to record a clean attempt despite two attempts at 182 kg and a further one at 183 kg. Emmanuel Nii Tetty Oku secured bronze, the first medal of this competition for Ghana, after managing to hit 168 kg.

Yule has already set his sights on the upcoming Paralympics and the future. Speaking after the event the Scottish lifter said: “We are going to train hard. Train like mad men, because that is what we do.

“But we need to make sure we recover like mad men as well. It needs to be just as important or you will pick up a niggle.

“Tokyo will be on us before you know it. We need to medal. We need to get top five places to secure our funding for the Paris cycle and beyond.

“We are lifting for the next generation here.”
The men’s up to 80 kg was like a game of musical chairs as pole position switched 5 times in Round 1 with Gkremislav Moysiadis (Greece) coming out on top with a clean 185 kg lift. Contenders fell away in round 2, leaving Ahmad Razm Azar (Georgia) and Moysiadis to battle it out for victory. Razm Azar eventually took the win, lifting just 1 kg more with his 186 kg lift from round 2. Abderrahim El Ammari (Morocco) joined them on the podium to receive the bronze medal.

Souhad Ghazouani of France was the only representative in the Women’s 73kg competition but managed to take gold and outlift most of the heavier division who were competing at the same time by hitting 115 kg on her second attempt.

In the women’s up to 79 kg Maria Antonieta Ortiz (Chile) dominated the competition with clean lifts at 110 kg, 144 kg and 116 kg. She was joined on the podium by fellow Chilean Marion Alejandra Serrano Guajardo who secured silver and Sanae Soubane who increased Morocco’s medal tally to two.

The increased weight got the better of a couple of athletes in the Men’s up to 88kg competition with Patrique Dankers (Netherlands) and Hideki Odo (Japan) both forced to withdraw from the competition due to injury after their second attempts. However, the latter still managed to take silver as Odo already had 180 kg in the bag from round 1. He managed to edge out the result on countback as he tied on weight lifted with Hungary’s Sedric R Watchou Kouokam who settled for bronze. However, the weights were no match for Frances Rafik Arabat who lifted 190 kg and almost got 198 kg on the last attempt of the day.

TICKETS
Tickets will be available at the event box office from 10:30am each day (£10 adults, £8 concessions, £5 children 14 and under). For the competition schedule, please click here.

LIVE STREAM
Watch the action from Manchester on the live stream here.