The British Olympic Association (BOA) has confirmed the selection of three Olympic weightlifters who will represent Team GB at the postponed Tokyo 2020 Olympic Games. 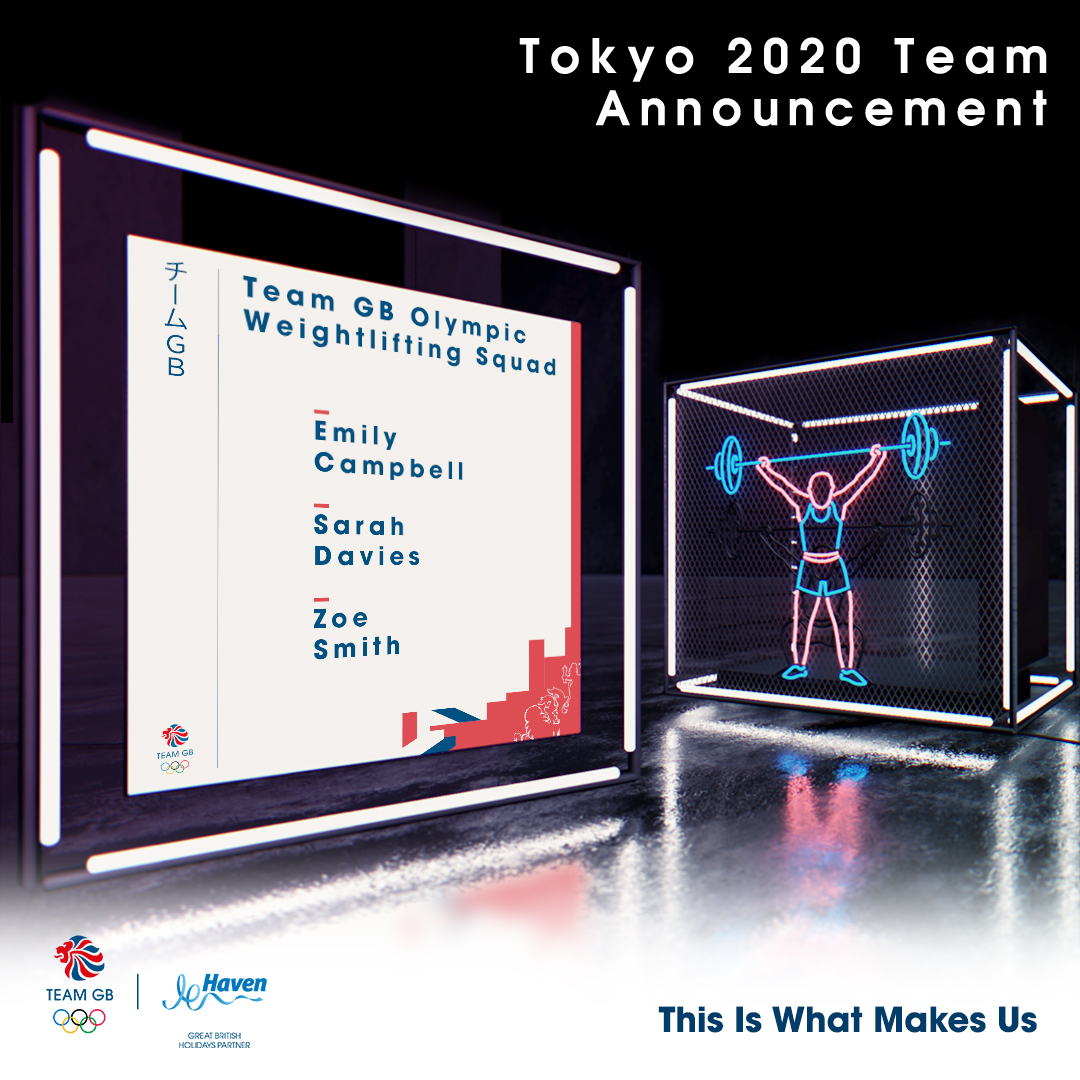 Zoe Smith represented Team GB at London 2012, securing a top 10 finish in her home city two years after becoming the first female English Commonwealth medallist at the age of sixteen. In a glittering career so far, she has also been ever-present on the continental scene, racking up numerous European medals in places such as Tel-Aviv, Batumi and Førde over the past decade.

Training at the Europa Weightlifting Club, Smith won gold at the 2014 Glasgow Commonwealth Games and overcame injury to secure silver at the Gold Coast four years later.  She is currently sixth in the Women’s 59kg world rankings which places her in a good position to be up there with the best in Tokyo.

Emily Campbell won three gold medals at the European Championships after a sensational display in Moscow earlier this year propelled her to the upper echelons of the weightlifting world. She became the first British weightlifter to take a European clean sweep since 1988 by setting Commonwealth records in the Clean & Jerk discipline and overall.

A meteoric rise for Campbell saw her win bronze at the 2018 Commonwealth Games, her first major international after switching sports from athletics.  Since then, she has gone from strength-to-strength in the past 24 months by medalling at the British International Open, and the Tianjin World Cup before her recent European triumph. The Nottingham-based lifter trains at the Atlas Workout Warehouse and qualified a comfortable fifth in the Women’s 87kg+ world rankings and is expected to be a strong contender to challenge the very best in the world.

Sarah Davies has medalled at the Commonwealth Games, Commonwealth Championships, British International Open and most recently at the European Championships where a superb performance saw her clinch three silver medals. In the latter event Davies was second only to the world number one in her category. Originally from Preston, she showed early promise in her career by winning the European U23 title in 2015 and made a statement of intent by finishing sixth at the World Championships in 2017.

Davies is also the chair of International Weightlifting Federation’s Athletes’ Commission and has played a huge role in championing athletes’ rights and gaining access to improved representation.  She is currently ranked fifth within the Women’s 64kg world rankings and has been training hard at Atlas alongside Campbell to be within striking distance of the Tokyo podium if things go her way on the day.

The athletes will be supported on their journey by Team GB Olympic Weightlifting Team Leader Stuart Martin, alongside the national coaching team which consists of Former Commonwealth Champion Andrew Callard of Europa and the experienced veteran Dave Sawyer of Atlas.

This is the largest British Weight Lifting team to secure their slots via the IWF qualification process since 1992 when six athletes were selected. It is also the biggest number of female British Olympic weightlifters to secure a place at the Olympics.

There is also a strong possibility that the squad could be expanded in the near future.  European and Commonwealth Champion Emily Muskett is also in line for selection, pending the outcome of upcoming doping sanctions against other nations. She currently sits tenth in the Women’s 76kg world rankings although she would only require to move up one position to qualify via a continental slot.

Mark England, Team GB Chef de Mission for Tokyo 2020, commented: “I am incredibly proud to be able to welcome Zoe, Emily and Sarah onto Team GB for the Tokyo Olympic Games.

“Today’s announcement is a significant moment for these athletes, their sport and for the British Olympic Association with this being the biggest group of female weightlifters to represent Team GB at an Olympic Games. We are anticipating that we’ll be taking more female than male athletes to Tokyo for the first time ever, and this group’s selection is another step towards achieving this historic goal.

“It is always special to have returning Olympians on the team alongside those making their Olympic debuts. Tokyo will be a fantastic experience that I have no doubt these athletes will relish.”

“We are absolutely delighted that our leading women have earned qualification for Tokyo. The loss of UKS funding after Rio and a global pandemic have made it a difficult Olympic cycle for the team, but it is every weightlifter’s foremost ambition to compete and win a medal at the Olympic games. We have made it our mission to overcome every challenge thrown our way and ensure that one of the most talented generations of weightlifters in the UK has continued to strive towards their ultimate goal. I could not be prouder of this team’s persistence and resilience.

We would also like to thank UK sport and the National Lottery for supporting us with the aspiration fund in 2019, without this funding the team would not have been able to attend critical qualification events and deliver the incredible feats they have done during the qualification period.”