Between 5 – 16 December 2022, nine athletes represented Great Britain in Bogota, Colombia at the IWF World Championships. All athletes put on an incredible show, with personal best lifts on the platform, three athletes ranking in the top ten and two silver medals. 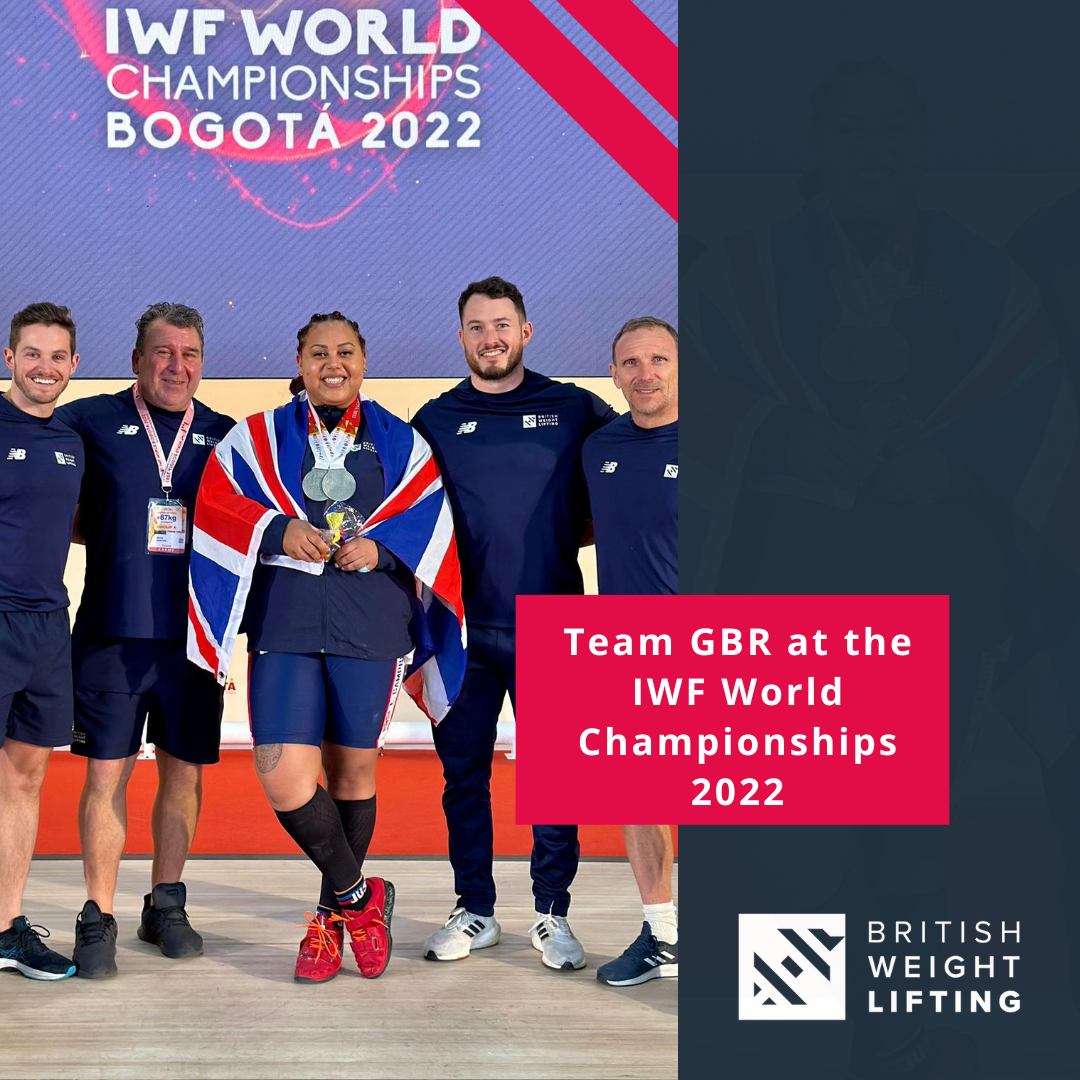 First up to compete was Noorin Gulam in the 49kg category on Monday 5 December. Noorin lifted in the C group and went 3 for 3 in the snatches, making 67kg, 70kg and 72kg. Noorin made her first clean and jerk of 87kg, unfortunately missing the next two at 89kg and 90kg on the clean.

This gave Noorin a total of 159kg, putting her in twenty fifth place overall.

Next onto the platform was Catrin Jones in the 55kg B group on Wednesday 7 December.

This gave Catrin a total of 186kg, putting her in twelfth place overall.

Jess made her first snatch at 83kg. She missed her second attempt at 86kg but came out and secured the weight on her third attempt. Jess opened her clean and jerks at 106kg. Her second lift of 109kg was ruled a majority decision no lift and Jess unfortunately missed her third attempt of 112kg.

This gave Jess a total of 192kg, putting her in thirtieth place overall.

Zoe Smith was the first of the team to lift in an A group when she took to the platform on Saturday 10 December in the 65kg group.

This gave Zoe a 209kg total, putting her in ninth place overall in the world!

On Sunday 11 December, Chris Murray lifted in the 81kg B group.

Chris missed his opening snatch of 140kg, but refocused and came out to make the weight on his second attempt. Chris then made a 5kg jump to end on a PB snatch of 145kg. Chris clean and jerked 175kg, but unfortunately missed out on 179kg and 180kg after cleaning the weight.

This gave Chris a total of 320kg, putting him in fourteenth place overall.

Cyrille lifted first, competing in the 96kg B group.

Cyrille snatched 154kg and then 159kg, just missing out on his final attempt of 161kg. In the clean and jerk, Cyrille opened on a good lift of 190kg, missed his second lift of 195kg, but came out to make a spectacular save on his final lift of 197kg.

This gave Cyrille a 356kg total, putting him at the top of the B group and eighth overall in the world!

Sarah was up next, competing in the 71kg A group.

Sarah missed her opening snatch of 99kg but recomposed and made the weight on her second attempt. She then missed her final attempt of 103kg. In the clean and jerk, Sarah made 124kg on her first attempt but unfortunately missed her next attempts at 127kg and 130kg.

This gave Sarah a 223kg total, putting her in fourteenth place overall.

On Thursday 15 December, Emily Campbell took to the platform in the 87kg+ group.

Emily opened her snatch at 119kg and had an even better attempt on her second lift of 122kg. Emily unfortunately missed her last attempt of 125kg. In the clean and jerk, Emily missed her opener at 159kg, but still moved up to 161kg for a great lift. The women’s 87kg+ category was highly competitive, and Emily’s last clean and jerk attempt would decide if she went home with the silver medal or not. The weight on the bar was 165kg, if made, a new personal best. The bar was heavier than Emily has ever lifted, even at the Tokyo Olympics. Emily made the clean, recomposed and put in an incredible effort for the jerk. A good lift and a silver medal secured.

This gave Emily a 287kg total, putting her in second place in the world! Emily also placed second in the clean and jerk, so received two silver medals.

Last up was Gordon Shaw, who lifted in the 109kg+ C group on Friday 16 December.

Gordon made his opening snatch of 163kg look easy but he unfortunately missed his next two attempts at 170kg. In the clean and jerk, Gordon went 3 for 3 making 192kg, 197kg and 201kg.

This gave Gordon a 364kg total, putting him in eighteenth place overall.

Matthew Curtain, CEO of British Weight Lifting reflected on the event “As the first qualifying event for the Olympic Games Paris 2024, BWL sent a strong team comprising of three men and seven women to Bogotá, Colombia. While all lifters competed with pride, integrity, and tenacious competitiveness I highlight in particular the outstanding performance of Emily Campbell who won two silver medals in the +87kg category.

Moreover, I also recognise the partnership of UK Sport and their instrumental aid in growing and developing the sport of Weightlifting in Great Britain.”