Team GB won three Para Powerlifting medals including one Gold at the Ready Steady Tokyo Test Event to maintain their fantastic form ahead of next year’s Paralympic Games. 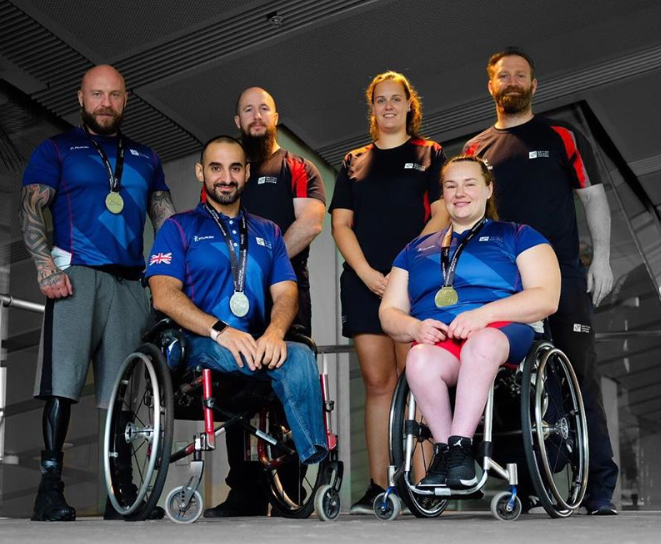 The World Cup category competition was a test event for the 2020 Paralympics and was hosted at the Tokyo International Forum which is the same venue that will be used at the Games next year.

There were some brilliant performances across the board from GBR’s trio of athletes which included Louise Sugden (Women’s up to 86kg), Ali Jawad (Men’s up to 54kg) and Michael Yule (Men’s up to 80kg).

The group spent a week in Japan to mitigate jet lag and travel fatigue ahead of the event where they were put through their paces by Paralympic Performance Director Tom Whittaker and Performance Coach Ben Richens who were supported by Physiotherapist Katie Collis.

Collis instigated a phase shift for the team prior to departure to help body clocks adjust part of the way, given the team would have to cope with an +8 hour time difference. Collis also planned the first 3-4 days down to the hour to ensure there were effective recommendations for light exposure, meal times and training times to support the team settling into a new time zone.

All of the hard work paid off as European Champion Louise Sugden clinched Gold in the women’s under 86kg category after successfully lifting all three of her attempts.

Sugden managed to press 116kg, 121kg and 122kg to set a new British record, beating her own benchmark from July. That last lift was 2kg heavier than the result she recorded at the World Championships in Kazakhstan.

Former World Champion Ali Jawad took Silver in the men’s under 54kg class after 18 months out due to an ongoing battle with Crohn’s disease.

He hit 145kg, then 147kg before missing out on 148 on his final lift. The group was topped by Frances Axel Bourlon who lifted 161kg.

Michael Yule also won a Silver medal in his first competition since returning to the sport after surgery in June this year.

The Scottish lifter went three from three and hauled weights of 175kg, 179kg and 181kg.

It was a sensational technical performance which saw him finish just 2kg off Gold medallist Ahmed Razam Azar of Georgia.

‘The amount of learning that is there for us to experience after this event is huge. This team was selected because we felt they were best placed to bring back their experiences and share them with the wider group ahead of next year. Data collected on jet leg and hydration status will help us tailor plans and the training data suggests we genuinely beat the body clock stress that such a long distance places on the body. It was great to see Ali back on the platform after missing a handful of competitions. Micky gave us a technical master class and Louise took another significant step towards the medal zone. Its an important winter and this trip should have put a spring in everyone’s step.’

The next domestic Para Powerlifting competition is the England Grand Prix which will be hosted on the weekend of the 2nd & 3rd of November in Milton Keynes.