Powerlifting sensation Mark Swan, 21, from Seaham in County Durham, was named as the winner of SportsAid’s prestigious One-to-Watch Award at the charity’s Celebrate the Next event, supported by Royal Bank of Canada, held on the 17 November. 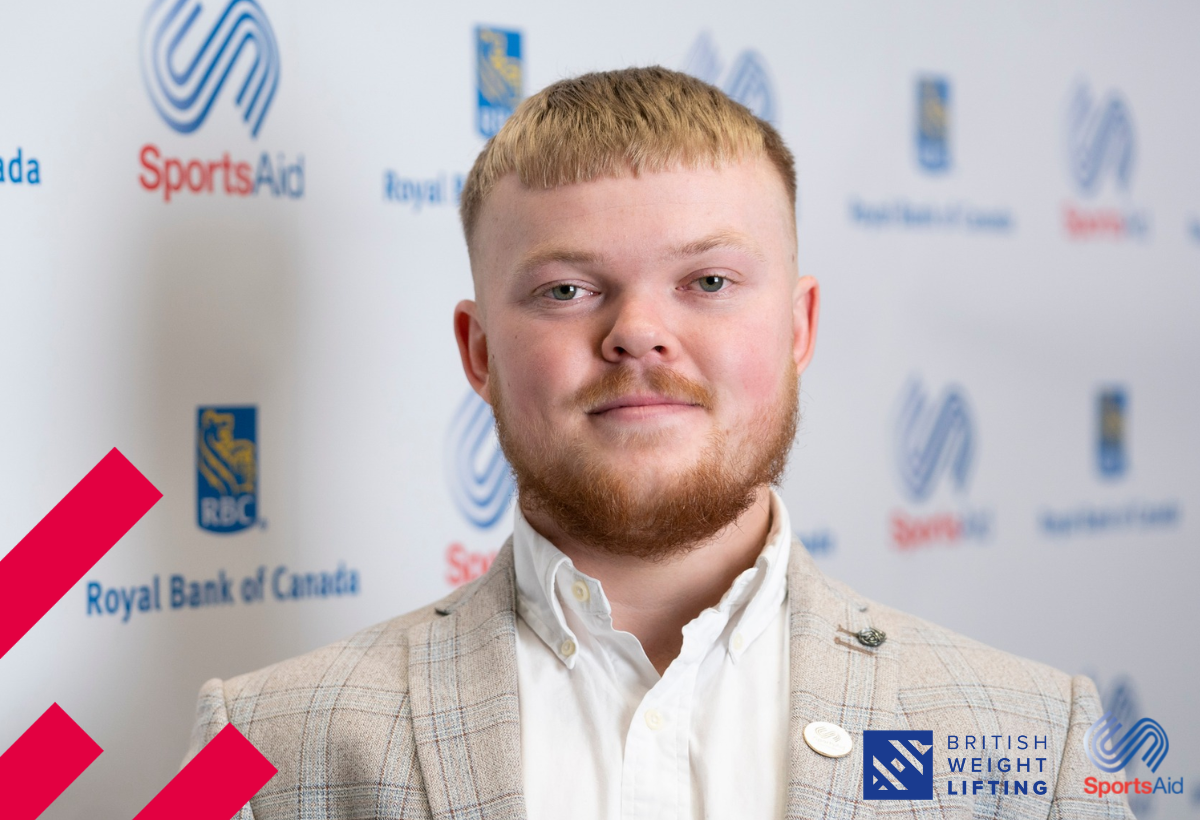 Mark was presented with the award by para swimming superstar Ellie Challis, who received the accolade herself in 2019, after an outstanding year which saw him claim gold in the men’s -65kg category at the European Open Para Powerlifting Championships, followed by silver in the men’s lightweight category at the Commonwealth Games in Birmingham.

“It means a lot to me,” said Mark, who has been helped by SportsAid through the Backing The Best programme, at Sea Containers House. “As I said in my speech, just to have the backing from SportsAid, it just gave me the great opportunity to maximise what I can at the minute and push me to where I am now.

“Having this now, coming down and meeting the team behind SportsAid, meeting them face-to-face and speaking to them, it’s given me a lot more motivation now to push forward as a SportsAid-funded athlete. I want to try and push the charity forward and show that they’re doing such a great thing in helping young athletes such as myself. There’s more motivation than there ever has been – at Paris 2024 I’m going to really try and get that gold medal.”

The One-to-Watch Award has gained a strong reputation for identifying the best up-and-coming prospects in Britain since its launch in 2006. Previous winners, including Tom Daley OBE, Hollie Arnold MBE, Courtney Tulloch and Alex Yee MBE, have already amassed over 50 senior medals from Olympic and Paralympic Games, World and European Championships, as well as Commonwealth Games, to establish themselves as household names.

“It’s been a really great night,” added Mark. “It’s been my first award ceremony like this. I never experienced anything like this before, but just to get this opportunity to come down and meet and talk to other athletes like myself who are doing amazing in their career so far, it just kind of gives us motivation that we’re all going to push forward together now.”

Each of the top 10 shortlisted athletes are being provided with a cash boost in recognition of their incredible feats this year. Mark is being awarded £1,000 as the winner with Emmanuel receiving £750 and Marfa benefitting from £500. Charlotte, 17, Gabrielle, 16, Jayda, 18, Lucy, 15, Marcus, 18, Poppy, 17, and Yemi, 19, will each be given £250. The top 10 are also being supplied with a Theragun - to support their recovery from training and competing - and a pair of Adidas trainers.

SportsAid alumna Ellie was delighted to be able to present the One-to-Watch Award to Mark and predicted a bright future for each of the top 10. Over the last three years, Ellie, now 18, has won a silver medal in the S3 50m backstroke at the Tokyo 2020 Paralympic Games, and secured one gold and three silvers at the World Para Swimming Championships in 2022.

“It was so good to be back tonight,” said Ellie. “I’ve never presented before - it was a very different experience but I really enjoyed being here. SportsAid for me has done a lot, it’s helped out my family, helped out my dad, and the days and the events they do are incredible.

“It was great to meet everyone. All these athletes today deserve the recognition they have had and I’m excited to follow them on social media and see how they progress. I learn everyday about new athletes that are supported by SportsAid, the ones that I looked up to growing up, it’s exciting to come here tonight - it’s not long until Paris now so let’s see what happens in the next few years!”

The top 10 were selected from around 1,000 rising British stars supported by SportsAid across more than 60 different sports in 2022. Each year, athletes are nominated by their sport’s governing body on the strength of their talent and potential, as well as their recent achievements, before a judging panel, led by Sarah Winckless MBE, identifies the winner, runner up and third place.

Emmanuel won gold in the men’s T47 100m at the World Para Athletics Grand Prix this year before topping the podium at the Commonwealth Games in the men’s T45-47 100m. This iconic moment in Birmingham, which went viral as Emmanuel celebrated with his family and friends in the crowd, is the highlight of his career so far and has given him extra fuel to reach for even greater heights.

“I’m really, really amazed,” said Emmanuel. “When I came here and saw the list of talented athletes, it meant that just being here myself was a really big achievement. But to come runner-up is like saying I’m one of the very best athletes in the country, so it’s a really good feeling.

“Seeing the athletes that are here in this environment is really good. Knowing that a lot of people are on the same path and had to work as hard as me to get to where they are – being able to communicate with them here tonight is really good. This gives me a lot of encouragement for the future – this gives me an extra bit of hunger that my success has been recognised.”

“It’s definitely amazing to have been nominated in the top 10 out of one thousand athletes, but to then find out that I’m top three out of all of them is just incredible,” said Marfa. “It’s very special to be third – it means so much that all the work has been rewarded and it makes me want to keep on going. The whole event has been amazing – seeing the other amazing talent and athletes is very inspiring and motivating.”

Celebrate the Next was attended by nearly 200 guests, including several Olympians and Paralympians who previously received SportsAid support, as the charity’s partners, supporters and fundraisers celebrated the achievements of young athletes throughout the last year and showed their backing for the next generation of British sport stars coming through.

Here’s further information on each of the top three:

Here’s the seven athletes who made the top 10 alongside Mark, Emmanuel and Marfa this year: