After a successful Paralympic Games where ParalympicsGB won three medals in Tokyo, the Great Britain Para Powerlifting team have just returned from their most recent international event at the World Para Powerlifting Championships in Tbilisi, Georgia which took place from 27 November to 5 December. 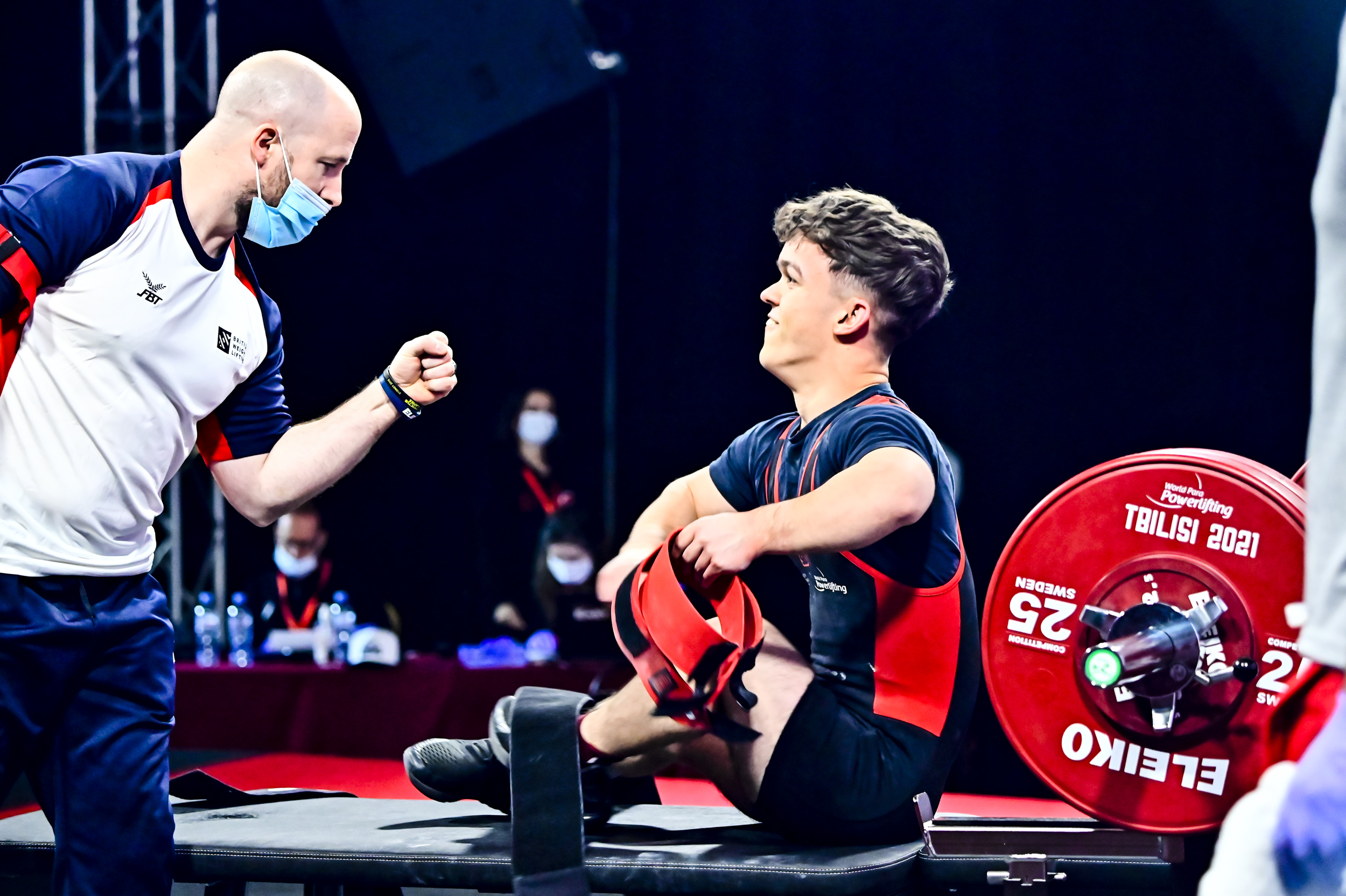 A team of thirteen athletes flew out to the event, which included a mixture of juniors and seniors.

First to hit the platform was Mark Swan in the men’s 65kg category and Tom Smith in the men’s 54kg category who set the standard for the junior World Para Powerlifting Championships by both securing gold medals. Mark successfully lifted 165kg, 170kg and 175kg and Thomas also hit all three white lights with 122kg, 126kg and 130kg.

Competing in the women’s 50kg was Olivia Broome and Charlotte McGuiness who carried on the medal winning performances. Charlotte secured silver by securing a personal best of 80kg and Olivia broke her own junior world record twice with 107.5kg and 108kg.

Last to compete in the junior World Para Powerlifting Championships was Oliver Liddle in the 72kg class. At 16 years old, this was his first ever competition and did really well to come back from two missed lifts due to a chest sequence technicality to win a bronze medal by lifting 101kg.

Zoe Newson was first to lift in the senior women’s 45kg class. Zoe secured her podium place on her second lift of 94kg clinching silver from Nigeria who missed her final lift.

Olivia Broome and Charlotte McGuiness were back on the platform competing in the senior women’s 50kg class. Charlotte lifted 77kg and 80kg successfully but missed 81kg on her third attempt. Olivia was successful in all three lifts of 102kg, 104kg and 107kg. It was a nail biting finish as five women battled it out in the final round for silver and bronze with Olivia successfully securing silver for Great Britain.

Sean Clare competed in the men’s 59kg C group and successfully lifted 135kg on his third attempt. Kim Dean was in the women’s 61kg category C group, finishing ninth with a lift of 86kg.

Mark Swan returned to the platform to compete in the senior men’s 65kg category. Mark got 9/9 white lights with 178kg, 184kg and 192kg securing him fourth place in the competition – a phenomenal performance for a junior athlete competing in a senior competition.

Rebecca Bedford competed in the 67kg category and was successful in the first two lifts of 83kg and 87kg but missed her third lift of 89kg.

Mat Harding made his GB debut at his first ever competition competing in the men’s 72kg category. He was successful with all 3 lifts at 144kg, 150kg and 155kg.

Next up was Louise Sugden in the women’s 86kg category. Louise finished in fourth place, narrowly missing out on a medal after missing her final lift of 132kg which would have been a personal best.

Micky Yule was in the men’s 80kg class which is a class higher than he usually competes in. Micky finished in tenth place, adding an impressive 8kg of progress on his Tokyo lift of 182kg in the class below.

Last up on the platform was Liam McGarry who was in the men’s 107+ class. This was Liam’s first World Championships and he was successful with all the lifts, finishing on 220kg which was a personal best adding a phenomenal 10kg.

Tom Whittaker, Para Powerlifting Performance Director said "It was an absolute pleasure and was so exciting to support and experience the performances of British athletes in Tbilisi. The results are the best British Weight Lifting has experienced in many years with two senior silver medals from Zoe and Olivia, close fourth place finishes from Mark Swan and Louise Sugden and a raft of impressive junior medals/performances.

“There were also exciting personal bests demonstrating further physical development post Paralympics which is no small feat. This puts us in an exciting position two and a half years out from the Paris games with a compressed cycle ahead of us due to the delayed Tokyo Paralympics earlier this summer.

“There is lots of hard work ahead of this group but I hope the performances on the platform and behind-the-scenes as a team galvanises and motivates the group moving forward. It should given the inspirational display at these world championships".