Virtual Open Series Analysis: The Foot on the Bar Fault

BWL Competition Manager Ed Halstead explores one of the most common technical infringements in the Virtual Open Series - the foot on the bar fault. The former British Senior Champion explains what the official rule is, why it was introduced, and how it is applied.

It appears that there has been a good number of new lifters joining in and having a go at weightlifting in the Virtual Open Series which is fantastic to see.

Overall we had a respectable entry of 145 lifters from all over the UK.

Most of the lifters made good totals, but unfortunately, there were some 'no lifts' given due to the lack of knowledge on some of the rules of competitive weightlifting.

One of the main reasons for a 'no lift' was due to the lifter placing the foot on, or in contact underneath the bar.

The rule was introduced in January 2019 by the IWF and BWL also added it to the national Technical Rules and Regulations (TCRR, 2.4.11).

The rule states that a `no lift` will occur if the lifter touches the bar with the foot (shoe/lifting footwear).

This is either before the lift starts, or as soon as the lifter places the bar on the platform and then uses the foot to stop the bar bouncing, rolling, or just to hold it in place.

Any part of the foot is not permitted to touch `any` part of the barbell, i.e. if a lifter uses a foot to move the barbell by pushing on the disc it will still count as a `no lift`.

The two examples below show a foot touching the bar. One was before the lift and the other was right after the lift, and because of this both must be classified as a `'no lift'. 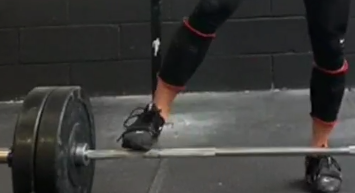 The foot on the bar rule was introduced to help with the health and safety of lifters, thinking of a way of keeping the bar free from dirt and possible infection.

This is due to lifters walking around and depositing the dirt onto the bar from their shoes where the following lifter would have a chance of picking up a possible infection due to dirt going into an open sweat gland or cut occurring in the hands, or shoulders.

We hope that this information is useful.