Mixed Emotions for Tong at the Birds Eye British Championships

Team GB U23 International Jenny Tong spoke of “mixed emotions” after clinching a British International Open podium at the Ricoh Arena in Coventry. 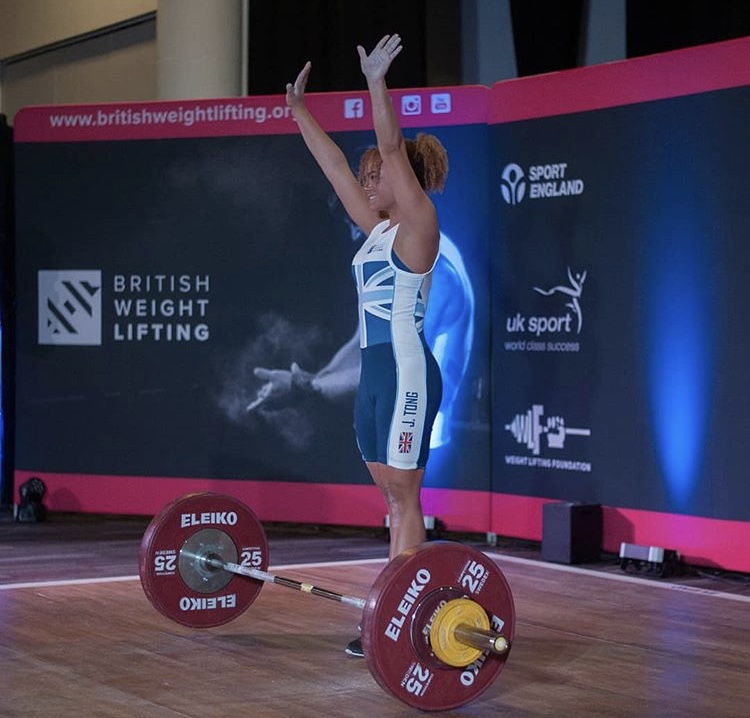 The Hallam Barbell lifter hauled a total of 170kg to rank 5th overall in the Woman’s 59kg class but moved up to third place because two of her domestic rivals were not registered for the international event.

Tong started strongly by lifting 75kg and 78kg with her opening efforts, but then missed 81kg on her final snatch attempt.

Tong hit 78kg on her opening  Clean & Jerk attempt, but missed her next two lifts, the first of which was ruled out following an intervention by the competition jury.

Initially, her 85kg effort was given the green light by the referees, but it was overturned on review.  She then failed to lift 87kg on her final attempt.

That result placed her 1kg ahead of Laura Hollobon in 6th, but behind Nikki Hamilton and Amber Sheppard who recorded 171kg and 172kg respectively.

The competition was won by Norway’s Sol Anette Waaler who totalled 187k while Team GB’s Olivia Blatch was second with 183kg.

“I’d definitely say mixed emotions,” said Tong after the event.  “I’m disappointed in myself with the 81 just because when it got to mid-thigh position, I knew that I hadn’t given it enough so when I missed it, I knew it was my fault.

“I could feel it happening. It’s a weight that I make pretty frequently in training so didn’t expect that to happen.

Tong was competing in a tough group which saw three of her rivals fail to finish.  Among them were Switzerland’s Scheila Meister and America’s Sarabeth Jumper who is ranked 3rd over in the States.

Despite being disappointed with the jury’s judgment the British U23 international respected the decision and was keen to focus on her own performance.

“With my third clean and jerk it felt like I was pulling the Earth off the floor and I just didn’t get under it. I’m positive in that last year I bombed out, so I am just really happy to be here and get a total.

“To get a bronze medal in the British International was a silver lining and a big confidence boost on a day that could have been terrible so mixed emotions, but happy to be here.”

Even though the overall result was not ideal Tong was keen to look on the bright side and extract the positives out of the event.

“How often do you get to do an international? “Especially in your home nation so that was great.

Tong has already set her sets on the European U23 Championships which are being hosted in in Bucharest Romania, on the 17th- 27th of October.

Last year Tong totalled 164kg in Poland to take 5th place on the continent and she is already looking to learn from her performance at the British and build upon it.

“It’s great to be a part of it, to be performing. Just not the results that I was looking for today and I think I need a lot more work in the runup to the European U23’s.

“I’ve currently got a tear in my right quad and so that needs looking at a little bit and yeah just head down, eyes forward and on to the Europeans.”