This year the European youth championships took place in the beautiful city of Milan, Italy. In true Italian style the competition started with a fantastic opening ceremony full of Music, Opera Singing and art which set the tone for a very well run competition from the Italian Weightlifting Federation. 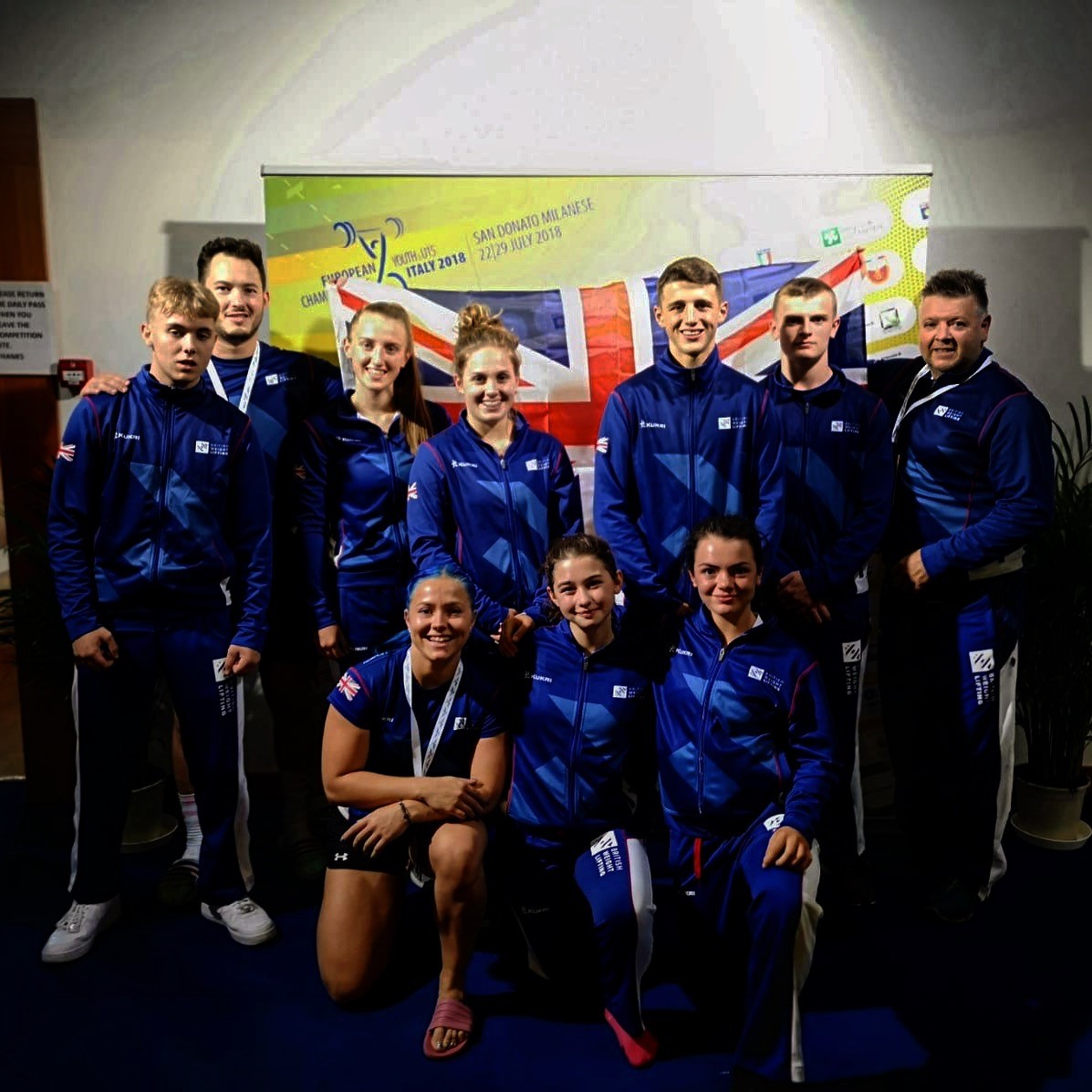 Up first for Great Britain in the Women’s U15 48kg category was Mia Keegan. After missing her first Snatch through nerves Mia bravely fought back to record personal bests in both the C&J and Total finishing 8th in her category. Mia said “My first international was a great experience and I can’t wait to get back in the gym, train hard and come back better next year.”

Next up was Ellie Pryor, the most experienced member of the team in the Women’s Youth (u17) 53kg Category. Ellie was looking to build on last year’s performance of 58/73(131) and a 10th place finish. After a strong performance at the British championships 2 weeks before Ellie came out strongly in the snatch matching her PB of 63kg to take 9th place in the Snatch, narrowly missing a PB attempt at 65kg. In the Clean & Jerk Ellie was in a close battle with Amellie Rezzak of France, eventually getting the better of her opponent to take 8th in the Clean & Jerk and Total with a lift of 83kg, improving last year’s total by 15kg.. With a higher standard of competition than previous years it was fantastic to see Ellie make progress in both her own performance and ranking.

Alex Richardson was to follow in the Men’s 69kg Youth category with a Scottish record breaking performance in the snatch of 94kg. Alex did well to overcome a missed second attempt and come out with a Personal best at his first international finishing 14th in one of the toughest categories at the competition, with European records being attempted in the A category.

Stepping up for their International Debuts in the Men’s 69kg u15 category was Aiden Sheeran and Josh Lynch. First out was Scotsman Aiden Sheeran who put in a good fight to snatch 80kg on the third attempt making 6kg of progress from his snatch of 74kg at the British youth championships in February. Then came Welshman Josh Lynch, with a superb 3/3 performance snatching 93kg to break the welsh u15 record and finishing 5th in the group. Unfortunately during the warm up for Clean & Jerk an injury stopped Josh from progressing further and the coaching team decided it was best to withdraw Josh from the competition with his long-term fitness as the priority, we wish him a speedy recovery and hope to see him back on the platform soon! Aiden was up again on Clean & Jerk, an unfortunate first attempt was red lighted for not holding the bar long enough overhead, but Aiden quickly responded making an easy second attempt at 103kg. The third attempt was not quite to be. An invaluable experience as a young lifter, both Aiden and Josh have many years ahead them.

After a break Niamh Broad was next to take to the stage in the Women’s 63kg Class. Niamh stepped up to deliver an excellent 3/3 performance in the snatch achieving a new personal best of 67kg and finishing in 9th place. Niamh went on to C&J 78kg for a 145kg total to deliver her best total of 2018 so far.

Last but not least was Chloe Hood in the Women’s Youth 69kg category in her first international. After a solid opener Chloe came just short on her second snatch attempt, but bravely decided to increase her weight to 69kg on the 3rd lift which she executed well and proved the increase to be a good decision. In Clean & jerk she again started well, eventually delivering a very solid 85kg Clean & Jerk to secure a 154kg Total, a 7th place finish and the highest ranking of any GBR athlete at the 2018 championships.

Rhodri Thomas (GBR Head Youth Coach) said “As a whole the team performed well, with 6 out of 7 lifters recording competition PBs and 2 home nation records broken during the event. We have a young team with 3 lifters set to return for the next 2 years and a number of other young lifters with potential back in the UK. The team was motivated by the experience and we look forward to seeing them develop as they move forwards as Youths and Juniors”.

BWL would like to congratulate the team of lifters and coaches for their performance at this year’s Championships and credit the preparation of their club coaches back in the UK for helping to create opportunities for our next generation to develop in the sport. We also extend a big thanks to Rhodri & GBR Assistant Youth Coach, Christie-Marie Williams for their good work over the 8 days ensuring that each of the lifters had the opportunity to demonstrate personal best performances throughout the competition and fulfil their goals.

If you would like to know more about where your children can learn weightlifting safely and effectively in your local area, please contact Performance Pathway Manager stuart.martin@britishweightlifting.org.