European Juniors and Under 23s Success

This year’s European Junior and Under 23 Weightlifting competition was hosted in the small, beautiful city of Zamosc in southern Poland. The competition hosted record entries with over 400 competitors from more than 30 countries across Europe. The British team consisted of 8 Lifters with the support of Coaches Stuart Martin and Christie-Marie Williams. Unfortunately Welsh U69kg lifter Michael farmer was forced to withdraw prior to departure due to a wrist injury, British Weight Lifting would like to wish Michael the best of luck with his recovery and we hope to see him back on the platform competing in the new year. 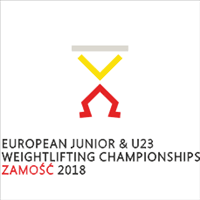 First up in the Women’s 53kg Junior Class was Fraer Morrow in her first international competition since the Commonwealth games in April. In Snatch Fraer opened confidently  securing a 6th place finish and an international competition PB of 76kg. Moving onto clean & jerk she secured her 3rd 170kg total with a 94kg Clean & jerk on her second attempt earning herself a 7th place finish only 4kg from the top 5 against some of Europe’s top nations

Up next was Scotland’s Jason Epton in the 77kg Junior B category, after a wobbly start on the Snatch Jason pulled out a brave third attempt at 124kg to stay in the competition. Turning his session around Jason delivered a convincing Clean & Jerk performance pushing himself above two A category lifters and clinching 1st place in the B group.

To follow was Chris Murray in the 77kg Junior A Category. Amongst a competitive field Chris delivered a personal best performance of 298kg in total breaking his own British Junior Records along the way and improving by 23kg ahead from his 2017 performance in Albania. A very tight Jerk session saw him pick up 7th place in the Clean & Jerk with his final attempt to take him into 5th place called as a press out.

Next up on his International debut was Junior 85kg Lifter Murtaza Nadeem from Rotherham, who fantastically delivered a 5/6 performance and a 272 total to beat 3 lifters and finish 4th in the B-Group. Taz said, “this experience has motivated me to go back to the gym and get strong and more skilful, I want to come back next year and finish inside the top 8”

Last up for the Women was Wales’ Tayla Howe, in her debut representing Great Britain. Tayla handled herself well delivering 4/6 lifts on the platform and a PB Total of 200kg to finish 5th place in the Women’s 75kg under 23 category amongst a line-up that included Junior world Champion Mariaa Petrova from Russia and 2016 Olympian Iryna Dekha from Ukraine.

Last onto the platform was team captain Jordan Sakkas in the Men’s 105 Junior Category. Leading from the front Jordan delivered a British and Welsh Record breaking performance of 5/6 lifts to finish in 8th place with personal bests of 146 in the Snatch and 326 total. Jordan Sakkas added comment that “Been out there with team made a massive impact on the way I lifted on the platform. Lifting for team mates you’ve grown up with in the sport as well as yourself gives you that little bit more incentive to succeed on the day”

Lead Coach Stuart Martin commented, “The team delivered an excellent performance at one of the most competitive European Junior & U23 Championships for a number of years. They handled themselves professionally on and off the platform and we’re excited to see how this team develops with 7/8 lifters still eligible by age to compete in 2019 & 2020”.