British Weight Lifting (BWL) is delighted to share the successes of the team of eleven athletes that competed at the European Weightlifting Federation (EWF) European Junior & Under 23 Weightlifting Championships. The athletes were supported by Team Leader Stuart Martin, and Coaches Dave Sawyer, Julie Morrish and Ania Negela. 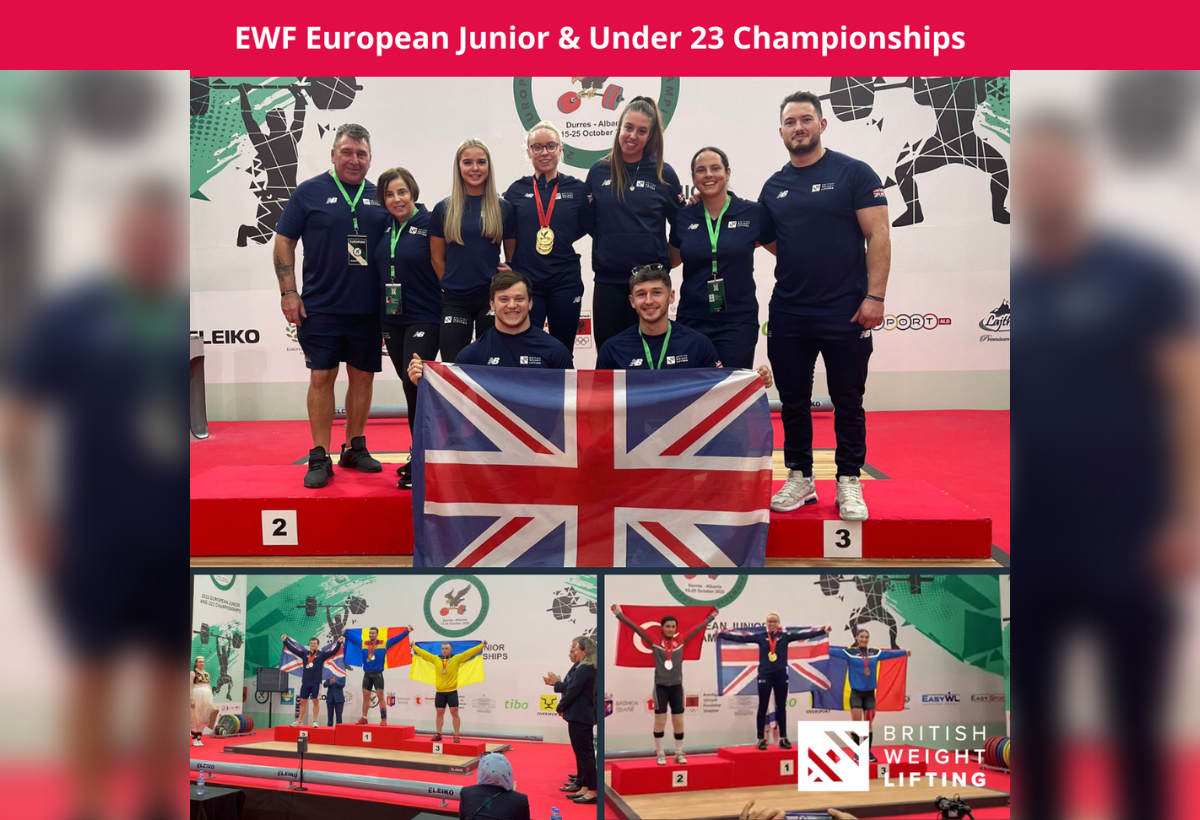 Nikole Roberts was the first athlete to compete on Sunday 16 October in the junior 49kg category, and she set the bar high with an outstanding performance.

In the Snatch Nikole lifted 63kg and 65kg for her first and second attempt but missed her third of 68kg.

In the clean and jerk Nikole successfully lifted 75kg, 78kg and 80kg.

This gave Nikole an amazing total of 145kg, personal bests in competition and British Junior records.

Next up was Catrin Jones in the under 23 55kg category on Monday 17 October.

Catrin missed her first snatch of 78kg but was successful with her second (78kg) and third (79kg) lifts giving her gold overall for the snatch.

This gave Catrin a fantastic total of 183kg putting her in top spot for a gold medal and making her European Champion.

Mikey Farmer was next to compete on Wednesday 19 October in the under 23 73kg category.

Mikey successfully snatched 125kg and 128kg, just missing out on his third attempt of 131kg.

On clean and jerk, Mikey made his first lift of 155kg, he got dizzy after his second clean of 159kg and had to drop the bar, nonetheless he increased the weight to 161kg for his third attempt, successfully making the clean, and narrowly missing out on the jerk.

This gave Mikey a 283kg total, putting him in sixth place overall.

Erin missed her snatch opener at 79kg, she recomposed and made the weight on her second attempt and had a strong last lift of 82kg.

Erin opened clean and jerk at 102kg, she missed her second attempt of 105kg, but made it on her final attempt.

This gave Erin a 187kg total, a new British record snatch, and placed her at the top of the B group.

Chris had a great day at the office, going five for six lifts. Chris snatched 138kg and 141kg with ease. For this last attempt, he fought with 145kg, but just missed the bar behind.

This gave him a 319kg total, putting him in second place for a silver medal.

Bella was up first, snatching 83kg and 85kg comfortably. She unfortunately missed her last snatch of 87kg.

This gave Bella a 191kg total, putting her in eighth place overall.

Stefano opened his snatch at 135kg, then made 140kg. He unfortunately missed his final attempt of 145kg.

This put him in sixth place overall.

Alice snatched 82kg, and missed 85kg on her second attempt, she recomposed and make it on her final lift.

This gave her a 192kg total, putting her in fifth place overall.

On Saturday 22 October Myren Madden and Drew Burns took to the platform in the Junior 96kg category.

Drew successfully lifted his first snatch of 131kg but unfortunately missed his second and third attempt of 136kg.

This gave Drew a total of 295kg putting him in tenth place.

On Sunday 23 October, Emily Sweeney was the last of the team to take to the platform in the Junior 87kg category.

Emily snatched 87kg and 90kg, and unfortunately her last lift of 93kg was given the red light.

Emily clean and jerked 110kg, missed the clean on 114kg, and after a strong fight with 116kg, just missed the jerk behind.

This gave Emily a 200kg total, putting her in fifth place overall.

British Weight Lifting would like to congratulate all the athletes on their efforts in the lead up to competition, and their outstanding performances out on Albania. The coaching team did a fantastic job in supporting the team throughout the competition and made some great calls on the platform. Thanks are given to UK Sport who continues to be instrumental in aiding the growth and development of weightlifting in Great Britain.