Emily Campbell made history in Tokyo by becoming the first British woman to medal in weightlifting at the Olympic Games by securing silver to win Great Britain’s first medal since 1984 where David Mercer took bronze in Los Angeles. 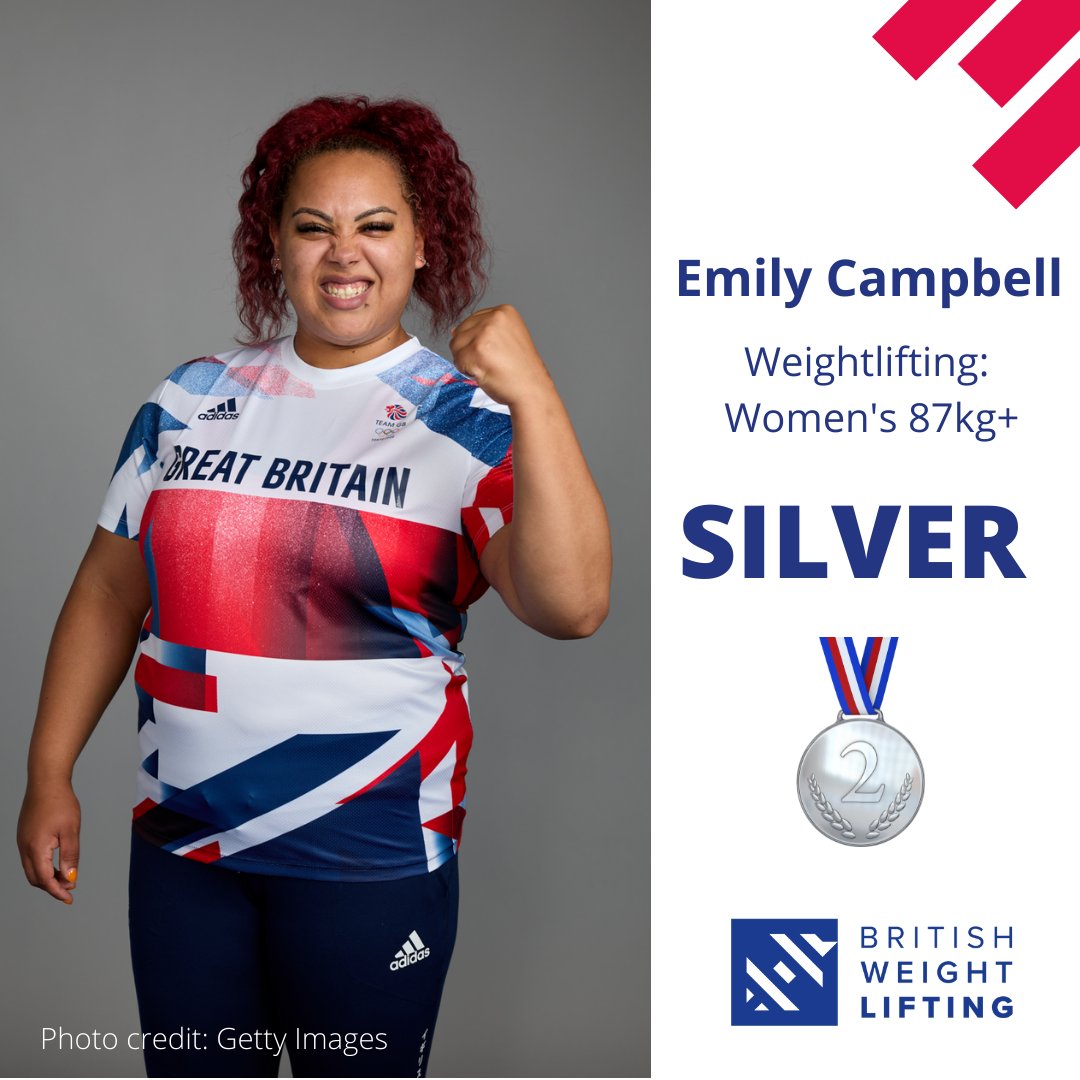 Campbell snatched 122kg to match the British Senior Women’s 87kg+ record and go into the interval in fourth place before hitting a British and Commonwealth Clean and Jerk record of 161kg to seal silver.

Those lifts earned her a total of 283kg which is also a new Commonwealth record.

Gold went to China’s Li Wenwen who lifted a new Olympic record of 320kg while bronze went to Sarah Robles of the USA who lifted 282kg.

Campbell was coached in the session by Stuart Martin, Andrew Callard and Dave Sawyer.

Speaking after the event to BBC Sport the silver medallist said “I literally said to the coaches what just happened?

“That clean wasn’t a perfect clean. It was out in front.  I knew I was going to have to fight for it, but nine times out of ten if I stand the Clean I can Jerk it.

“So I just had to breath, say to myself you have done this a hundred times and Jerk it.

“So you know I am lost for words right now”

“Thank you to everyone who believed in me. You can achieve anything you want to achieve.

“I picked up a barbell five years ago for the first time and now I am an Olympic medallist. Thank you for all your support.”

It is the latest achievement for Campbell who has had a stellar rise through the ranks in recent years after switching sport from Athletics.

Campbell won her first English Senior Championship in Milton Keynes January 2017 after switching sports from Athletics. She would then go on to retain the title in 2018, 2019 and 2021.

The Nottingham based lifter has also enjoyed similar success at British level with a maiden title triumph in 2017 at the Ricoh Arena, in Coventry, followed by two more consecutive wins in the years that followed.

Campbell trains at Atlas gym in Alfreton working with national coach and former lifter Dave Sawyer and Cyril Martin, a coaching veteran with over 60 years’ experience in the sport.

She finished fourth at the 2017 Commonwealth Championships which were held at the Gold Coast, Australia and served as a test event in preparation for the 2018 Commonwealth Games. The following year Campbell returned to the same venue and won bronze for Team England.

After announcing herself on the international arena with her Commonwealth medal success, Campbell started her Olympic qualification campaign at the World Championships in Ashgabat lifting 248kg to finish fourteenth.

She then won bronze in the Snatch, Clean and Jerk and total disciplines at the 2019 European Championships hitting 260kg, before lifting 255kg to medal at the British International Open in Coventry.

Campbell lifted 267kg at the 2019 World Championships in Pattaya, Thailand to take ninth and her last competition before the Covid-19 pandemic was the Tianjin World Cup where she medalled in the Snatch and finished fourth overall lifting a total of 271kg.

Those performances saw Campbell honoured with the Sportscover Weightlifter of the Year accolade at the latest BWL Annual Achievement Awards. Campbell also currently serves as the Athlete Representative on the British Weight Lifting Board, ensuring that lifters have their voice heard on key governance decisions.

Hitting six out of six lifts, Campbell snatched 122kg to set a new British record and stormed to gold at the interval. She then managed to produce another British record to win Clean and Jerk gold lifting 154kg for a total of 276kg to wrap up the overall title as well.

The Clean and Jerk performance also ensured she set a new Commonwealth record in that discipline and the overall total, beating the previous benchmarks of 151kg and 275kg set by Samoa’s Feagaiga Stowers in 2019.

Those records are now surpassed with her Tokyo Olympic Games performance. She becomes only the sixth person in history to win a medal for Great Britain at the Olympics joining a legendary list that consists of Launceston Elliot (gold and silver 1896), Julien Creus (silver 1948) , Jim Halliday (bronze 1948), Louis Martin (bronze 1960 and silver 1964) and David Mercer (bronze 1984).

British Weight Lifting would like to congratulate Emily on her incredible performance today.