Emily won her first English Senior Championship in January 2017 competing in Milton Keynes. She would then go on to retain the title in 2018, 2019 and 2021. The Nottingham based lifter has also enjoyed similar success at British level with a maiden title triumph in 2017 at the Ricoh Arena, in Coventry, followed by two more consecutive wins in the years that followed. 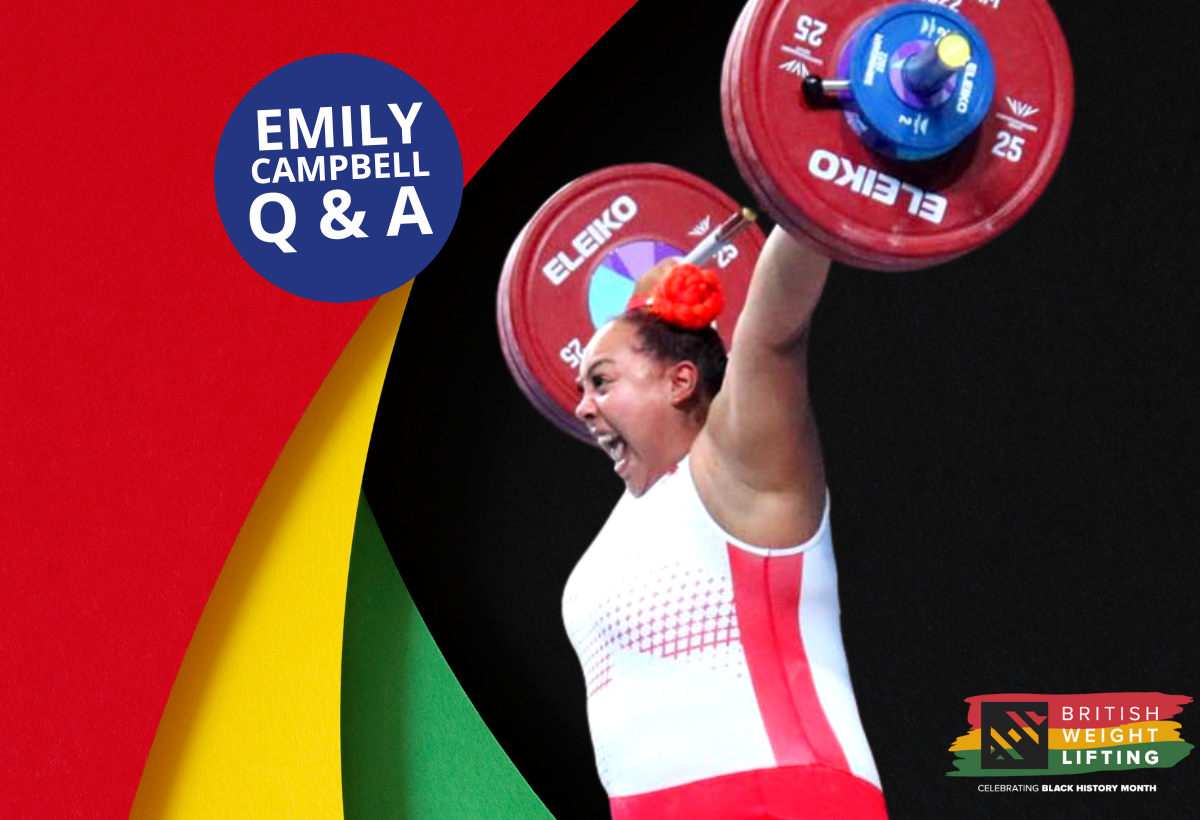 She finished fourth at the 2017 Commonwealth Championships which were held at the Gold Coast, Australia and served as a test event in preparation for the 2018 Commonwealth Games. The following year Campbell returned to the same venue and won bronze for Team England.

She then won bronze in the snatch, clean & jerk and total disciplines at the 2019 European Championships hitting 260kg, before lifting 255kg to medal at the British International Open in Coventry. Campbell lifted 267kg at the 2019 World Championships in Pattaya, Thailand to take ninth and her last competition before the Covid-19 pandemic was the Tianjin World Cup where she medalled in the snatch and finished fourth overall lifting a total of 271kg.

Those performances saw Campbell honoured with the Sportscover Weightlifter of the Year accolade at the 2021 BWL Annual Achievement Awards.

At the 2021 European Championships, Campbell became the first British weightlifter to win a clean sweep of golds across all three disciplines at the European Championships since Marie Forteath in 1988. Hitting six out of six lifts, Campbell snatched 122kg to set a new British record and stormed to gold at the interval. She then managed to produce another British record to win clean & jerk gold lifting 154kg for a total of 276kg to wrap up the overall title as well. The clean & jerk performance also ensured she set a new Commonwealth record in that discipline and the overall total, beating the previous benchmarks of 151kg and 275kg set by Samoa’s Feagaiga Stowers in 2019.

At the delayed 2020 Olympic Games in Tokyo, Emily Campbell became the first British woman in history to medal in weightlifting at the Olympic Games by clinching silver in the women’s 87kg+ session which saw British and Commonwealth records broken. She is only the sixth person in British Weight Lifting history to stand on the podium at the Olympic Games and the first since David Mercer in 1984, in an amazing display of strength and determination that inspired the nation.

Campbell snatched 122kg to match the British Senior women’s 87kg+ record and go into the interval in fourth place before hitting a British and Commonwealth clean and jerk record of 161kg to seal silver. Catch Emily’s amazing 161kg clean and jerk here.

At the 2022 Commonwealth Games in Birmingham Emily went three for three in the snatches, opening at a massive 117kg, making an even snappier 121kg and finishing on an incredible 124kg.

Emily entered the clean and jerk with a 3kg lead on her main competitor. The coaches selected 152kg for Emily’s opening clean and jerk, which she made with ease. 5kg was added to the bar for a lovely 157kg second attempt. For her final lift, the bar sat 162kg for a personal best attempt. Emily completed the lift, gaining a good lift.

This gave Emily a sensational 286kg total, a new personal best, a new Games record, six out of six good lifts and most importantly, a gold medal for England.

Emily is the current British Record holder in the women’s senior 87+kg category for the snatch, clean and jerk and total.

Emily is also the Athlete Representative for weightlifting on the British Weight Lifting Board of Directors.

My background is Jamaican and the way we celebrate is good food and good music. When I was a kid on a Sunday you would be woken up to the sweet smell of curried mutton, rice and peas and mellow vibes of reggae music. My hair is also something that is incredibly important as it’s part of my identity and the fact we can do so many different styles that really shows our culture.

Why is it important to celebrate Black History Month?

Even though I think Black history should be celebrated all year round not just in a month, because of the society we live in I still believe there is a massive importance to having the month. It is a time to remind and highlight all the amazing, monumental, and historical things that Black people have achieved. It’s also a time to show young people representation and inspire them to be successful in their own way.

It means we need to see people, organisations and businesses practice what they preach, a lot of people will just do the tick box exercise because it’s October and they don’t want to be branded that they don’t care, when it’s about seeing organisations having Black people with managerial roles and celebrating Black people and future all year round. Representation is everything, if you can’t see it you can’t be it!!

What was it like starting out weightlifting? Did race play a factor?

I believe it did to a certain extent as I felt I needed to prove myself more to be appreciated and took more seriously in relation to my white counterparts. Only when my achievements went above and beyond, I felt I was taken seriously as an athlete.

How does it feel to represent Great Britain on the international stage?

It’s an honour every time to put the red, white and blue suit on and step on the stage doing what I love the most! It’s a very special feeling you can’t really put into words.

What are some of the obstacles you faced during your career?

I encountered my fair share, I had been an unfunded athlete for most of my career and not many companies were interested in working with me on a sponsorship basis so working and training was tough. I’ve had a couple of surgeries and injuries that I have had to navigate and get back to the level I was before and better.

Yes, I do I believe we are in a privileged position in that a lot of people are inspired by what we do, listen and respect the words that we speak, so we should set example and address things that we believe aren’t correct and need change.

I would like to see more Black representation within the workforce and at Board level at British Weight Lifting, our athletes and technical officials have strong representation but that doesn’t filter through to the top.

You were selected to represent England as flag bearer at the 2022 Commonwealth Games, what did it mean to you to hold the flag at the Opening Ceremony?

It was a huge, huge honour. I was the third ever weightlifter and only ever female weightlifter to have the opportunity to lead our talented diverse team England and to do it at a home games was even more special. I had big shoes to fill as Louis Martin and Precious Mackenzie were the two before me and for them also to be people of colour means the world to me.

What does being a Black woman mean to you?

I love being a Black woman, I love our culture, the way we look and the way we shine. But I have a responsibility to relay this message to young Black girls as society often tells them that they shouldn’t be proud of their skin, hair, or culture. I’m fighting for a world where all Black women and girls can shine without being told they can’t.

Which Black person from history or today is your role model and why?

Serena Williams, she entered a sport where apart from her sister, it was dominated by predominately white males. She stays true to herself, carried herself immaculately on and off the court and achieved things some people could only imagine. Since the birth of her daughter, she has continued to be an advocate for women in particular Black women and be the role model we all needed.

Follow your dreams, do what makes you happy. If you want it bad enough you will get it, it’s not going to be easy and there will be many people that will doubt you along the way, but when you get there the feeling is so much sweeter.