Deborah Alawode is a GB and Commonwealth Games athlete and British record holder. Deborah’s first international competition was the 2019 British International Open, where she totalled 178kg in the women’s 71kg category. 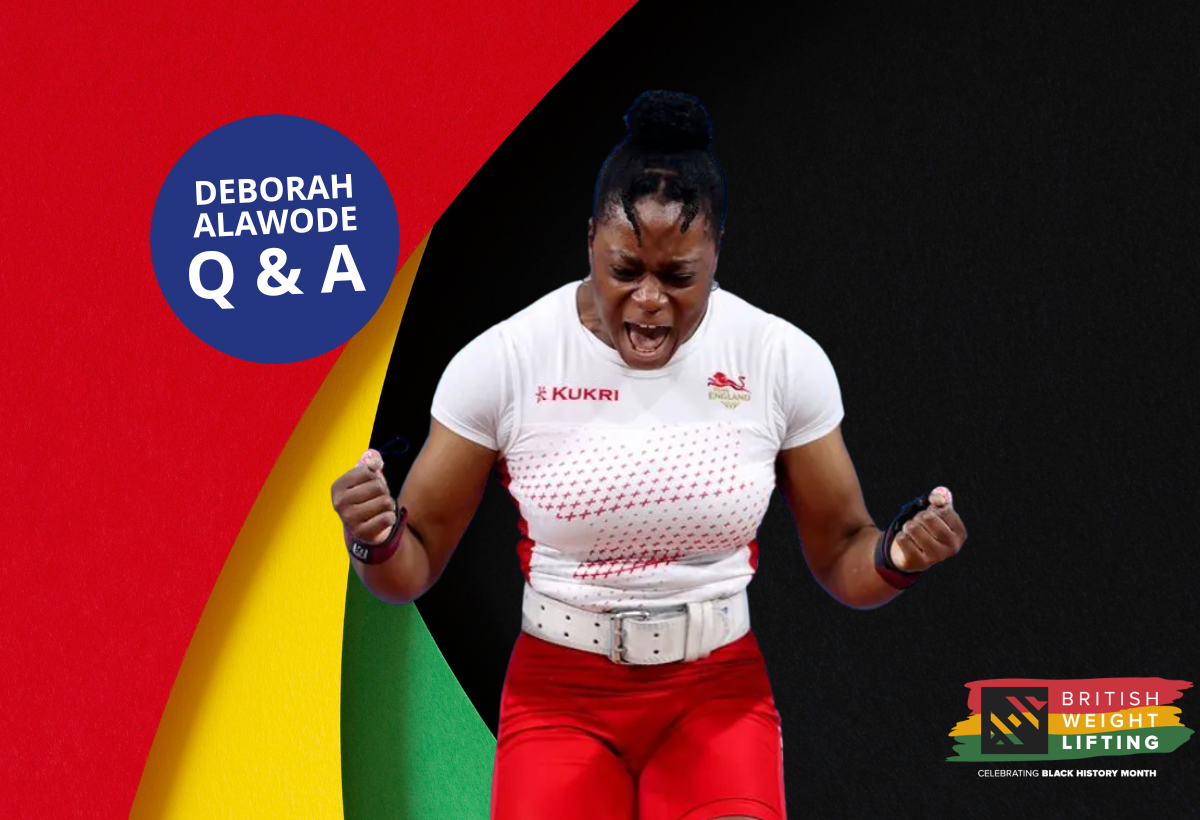 At the 2022 BUCS Weightlifting Championships, Deborah added 27kg onto this previous total, managing an incredible 207kg and gained a gold medal in the women’s 87kg category. Deborah upped this total to 211kg at the 2022 England Commonwealth Trials where she fought for a spot at the 2022 Birmingham Commonwealth Games and succeeded.

I am Black African, specifically Nigerian. I celebrate this in the traditional Nigerian foods I enjoy eating, but also in the way I pronounce my first name, which is the way my Grandma says it. However, I also make a point of pronouncing the names of people whose first name is Yoruba in the correct way, rather than westernising the pronunciation of their name for ease.

Why is it important to celebrate Black History Month?

It is important to celebrate Black History Month to not only challenge racism, but also to recognise the impact and contribution of Black people to the world as we know it, both historically and in present day. Having said that, I think it’s equally important, if not more important, to not confine Black history to one month per year. Rather, it should be integrated into world history as a whole throughout the year.

To me, this theme means not only saying “I stand with Black people against racism” but also showing that through your actions. For a business, this could mean having a diverse employee pool, or as individuals, this could mean calling out friends/colleagues who make an inappropriate comment about race, regardless of what your or their ethnicity is.

What was it like starting out weightlifting? Did race play a factor?

Interestingly, race did play a factor into me starting out weightlifting. At school, I had already been nicknamed “hench/wedge” by my peers, or in other words “strong/muscular/etc”, because I used to beat all the boys in arm wrestles! This name was always used in a light-hearted way, never as a form of verbal abuse. There were a couple of other students in my year who had been given similar names, and the main aspect we had in common was our race. When my first weightlifting coach, Kazem Panjavi, came to my school to run a 6-week taster course, my peers and some of my PE teachers suggested I take part in the course, which is how I got into the sport. However, I found out very recently that the course was supposed to only be for GCSE PE students, which I was not! Had I known this small detail, I most likely would not have taken part. However, I think my teachers and peers recognised that I had some natural strength, likely due to my race, which would be a good starting point for the sport.

How does it feel to represent Great Britain on the international stage?

Representing Great Britain on the international stage is an absolute honour. It is a dream I have been pursuing since Summer 2019, when I narrowly missed out on selection for European U23s. For awhile, I thought I would never be good enough to represent GBR, especially given that my final year as an U23 was taken away by COVID and the qualification totals kept increasing year on year. So to have achieved this goal as a senior this year feels incredible and I’m excited to work towards being given the opportunity to represent GBR again next year.

What are some of the obstacles you faced during your career?

When I first started weightlifting, the financial side of the sport was very tricky. But I was extremely fortunate to have been supported in this by Kazem, who gave me second-hand weightlifting shoes and a competition singlet, as well as allowing me to pay my club membership fees in instalments. This is definitely an area that many people from ethnic minorities struggle with. Another obstacle has been balancing my studies with training. This is an obstacle I’m still overcoming, but which has fluctuated in difficulty as I’ve progressed though A-levels, when weightlifting wasn’t my only sport/activity, and into uni, where weightlifting has slowly become more of a priority than it previously was now that I am competing at an international level. The flexibility in my schedule that comes with doing a PhD has made it easier to fit training around my research. However, I know things will become more challenging when I finish my PhD and have to complete my final 2 years of Medical School, where my schedule will be much less flexible…

I think athletes do have a responsibility to use their platforms to raise awareness of and address these issues, however this will look very different depending on the personality of the athlete. For example, as someone who doesn’t like to get too involved in things on social media, for me this looks like sharing a few posts as and when I feel led to. For someone who is more outspoken on social media, this might look like speaking/typing paragraphs on their stories, or engaging with their followers more actively through Q&As and quizzes etc. I don’t think either style should be criticised or looked down upon, the most important thing is that they are using their platform in a way that is true to their character and nature.

In the UK specifically, one thing I’d love to see is greater representation of ethnic minorities on national teams both at a youth/junior level and at a senior level. This largely comes with increasing awareness and access to the sport by visiting schools, but also ensuring finances aren’t a barrier for anyone wanting to take part in the sport, e.g. 1) by offering subsidised membership fees and competition entry fees to individuals from a lower income background; 2) BWL or clubs having spare singlets and shoes which can be donated to individuals who are unable to acquire kit of their own. But looking more worldwide, obviously the issues of corruption and national doping need to be addressed sooner rather than later…

You recently represented England at the 2022 Commonwealth Games, what did it mean to you to represent your country at a home Games?

Representing England at the Commonwealth Games is something I never imagined I’d achieve. So to not only do so, but to do it at a home Games was absolutely incredible. Having family and friends in the crowd, which may not have been possible had it not been a home Games, was extremely special, and is something I will never forget. In the weeks following the Games, I found out that a number of old school friends who I’ve now lost contact with had also watched online, and I think this was largely down to the publicity that came with this being a home Games.

What does being a Black woman mean to you?

To me, being a Black woman means not trying to conform to the societal norms that come with growing up and living in a predominantly white, Western society. It means embracing the fact that I am different to my white peers, which is something that should be celebrated, not hidden. A massive part of this for me is actively choosing to keep my hair natural, rather than relaxing it or styling it in a way that better fits with Western culture.

Which Black person from history or today is your role model and why?

I wouldn’t necessarily say she is my role model, but one Black person that does spring to mind is Letitia Wright, who starred as ‘Shuri’ in the Black Panther movie. Not only did she play a character in the movie that I can relate to from a scientific point of view, but she has also been very vocal about her faith as a Christian, and has tried her best to uphold that in the roles she plays or declines – something I try to do in my spheres of life.

My advice would be to not let people make you choose between academics and sport. I guarantee you it will not be easy, but with the right support and work ethic, it is possible to achieve highly academically whilst also competing in your sport at the highest level.