British Weight Lifting would like to congratulate Dave Hembrough on winning BBC Unsung Hero for the Yorkshire region and on becoming a national finalist for the BBC Sports Personality of the Year Unsung Hero Award. 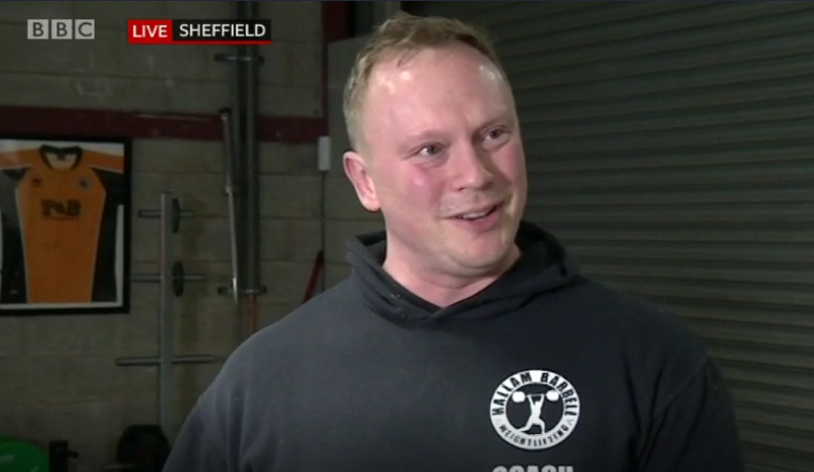 The founder and head coach of Hallam Barbell Weightlifting Club has been recognised for his work with the local community and his commitment to diversity around encouragement and participation in weightlifting and resistance training.

“Without Dave’s support my life would be completely different and I feel really honoured to help support your club, and Hallam Barbell as a whole, the community and everything that we stand for,” said Jenny.

“Dave’s support has meant that so many people have been able to get involved with strength sports, training and being healthy, and it’s just incredible”.

Whilst sacrificing his own time to deliver opportunities for people regardless of ability, gender, age or background, Dave also plays an important role in developing other fellow coaches and officials.

During lockdown, Dave personally delivered strength and conditioning equipment to people’s houses so that they could continue to exercise during the most difficult times of the pandemic.

He also used his social media presence to set up his Coach Mentoring Programme in which he provided ‘selfless’ and much-needed support and guidance to trainee strength and conditioning coaches across the UK.

Speaking about the award win Dave said: “It’s such a privilege to have won the regional unsung sporting hero award 2020 for the community work I do through Hallam Barbell Weightlifting Club. Weightlifting and strength training is such an amazing tool for people to change lives with and I’m so happy that I can share this through the award.

“Our club and many others are doing great things in communities to give people positive physical activity experiences through strength training and introducing people to competitive weightlifting. Hopefully the worlds head is turning to what amazing things can happen when people lift weights together.

“The support that British Weightlifting has given me and the club has been essential in achieving the successes that have contributed to the award. It’s really important to recognise that our club model caters for competitive lifting but also supports many specific groups with bespoke programmes including young people, women only, BAME audiences, elderly adults and individuals with mental health challenges.

“I firmly believe that strength saves lives and that British Weightlifting and Weightlifting clubs have a key role in helping people with this.

A judging panel made up of some of the region’s key sporting figures hailed Sheffield Hallam Universities lead strength and conditioning coach  as a ‘pioneer in his sport’.

Panel judge Sally Hurst, a Great Britain para-cyclist and BBC Look North reporter, said: “Dave doesn’t just sit and wait for people to come and join in – he actively encourages them to have a go. And the benefits are clear – not just for physical health but confidence and self-esteem too.

“Many of the people who nominated Dave spoke about his generosity in mentoring them outside of sport during Covid and using sport as a vehicle to push for positive change in their lives more broadly. He is volunteering his own expertise and enthusiasm to make a real difference to people’s lives in a truly inclusive way.”

The majority of Dave’s work has involved working with women of all ages and abilities with a focus on improving mental and physical wellbeing as well as working with children from deprived areas, BAME groups and those with disabilities who often feel alienated from extra-curricular sport.

Dave was one of the first to realise the benefits of strength and conditioning for older people for their physical health and the ability to lead healthy, independent lives.

Combining resistance training with mindfulness he created his MindfullySTRONG programme, which is particularly popular with participants who are new to physical activity and are daunted by the prospect of training in a conventional gym.

One of Dave’s many nominations for the BBC Unsung Hero Award, came from Professor Simon Shibli, head of the University’s Sport Industry Research Centre.

He said: “I am delighted that Dave Hembrough has won the Unsung Hero Award for the Yorkshire region, it is no less than he richly deserves.

“I attended his MindfullySTRONG programme and I can vouch personally for the positive impact that he makes to people’s lives.  As a University, we aspire to be the world’s leading applied university and Dave is an excellent ambassador for us on this mission.”

Professor Sir Chris Husbands, Vice-Chancellor of Sheffield Hallam University, said: “I am delighted that Dave has won this award. He is a pioneer in his sport and has demonstrated the power of community engagement to transform lives.

“His commitment to encouraging diverse groups of people to take-up weightlifting has had a significant impact, helping people both in our local community and across the UK to make positive changes to their lives.

“He has made a tremendous contribution and richly deserves this recognition.”

Dave will now join the 15 regional finalists where Olympic legends and leading figures in the community sport sector will select the overall winner.

The national Unsung Hero Award winner will be announced live on BBC One at BBC Sports Personality of the Year on Sunday, 20 December.

Dave is familiar face to many within the weightlifting community being ever-present at competitions and coaching events across the county over the years and we are sure that everyone will join us in cheering him on come Sunday.