As part of Black History Month, we are revisiting some of the most influential black British weightlifters to have graced our spot. Today we are focussing on a man who is often regarded as the most successful British lifter of all time. 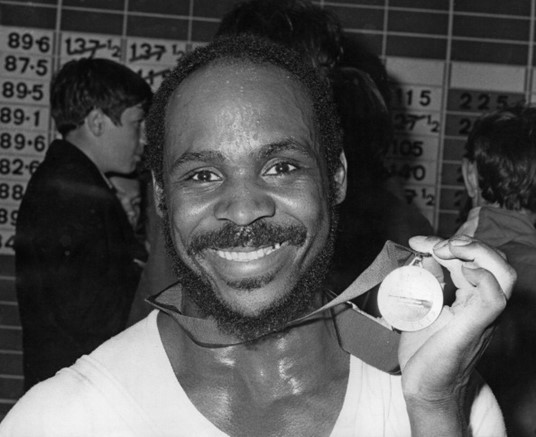 With a trophy cabinet that includes four World Titles, four European Championships, three Commonwealth Games Golds and two Olympic medals, it couldn’t be anyone else but Louis Martin.

Louis George Martin was born in Kingston, Jamaica, in 1935 and moved to the UK in the mid-1950s as part of the Windrush generation.

He eventually settled in Derby where he started specialising in weightlifting.

That run saw him top the podium in various cities such as Warsaw, Budapest, Stockholm and Tehran.

On the continental scene, it was a similar story as in that same period Martin entered five European events and emerged victorious in four.

During those dominant displays he represented Great Britain at Rome in 1960 where he brought home bronze and four years later, he went one better and took silver in Tokyo.

Those are the best British results ever seen in the current incarnation of competitive weightlifting.

He took a third Gold medal for Team England in Edinburgh 1970 to go alongside his Perth 62 and Kingston 66 triumphs.

Martin was also a cultural icon. When he wed local Derby girl Ann Robinson in 1964 it was one of the first highly publicised mixed-race marriages in the UK and he featured on the front cover of The Sunday Times supplement.

The following year Martin earned an MBE from the Queen for services to weightlifting and was an official flagbearer for Team England in 66.

After he retired, Martin eventually set up a series of gyms where he helped train the next generation of talented lifters. In 2012 he carried the Olympic torch on its tour of the UK ahead of the London Olympics.

Martin passed away aged 78 at his Derbyshire home in 2015. However, even today his legacy still shines brightly, and in 2018 he was one of the first people to have a commemorative plaque installed on Derby’s new walk of fame.