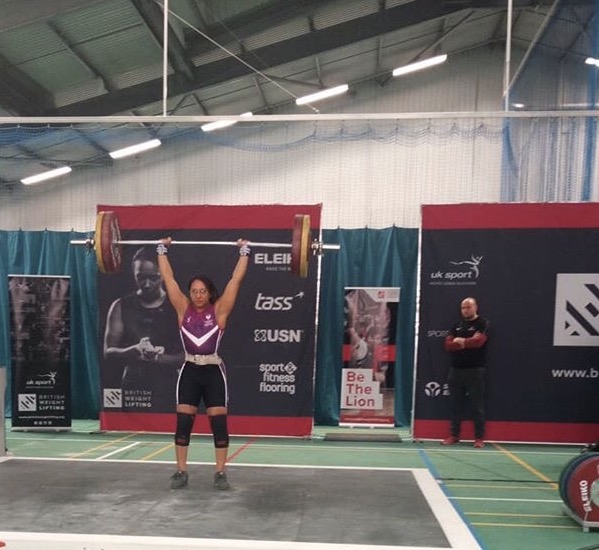 The championship was the largest single competition in British history with 156 lifters going on to record classified results.

Cardiff Met University secured second spot with a score of 77, while only two points separated Brunel and Bournemouth for the final podium slot. They scored 51 and 49 respectively.

Three-time England title holder Cyrille Tchatchet once again produced the largest lift of the weekend by hauling an impressive total of 360kg for Middlesex University in the Men’s 102kg.

The 2014 Commonwealth Games athlete snatched 160kg. He then broke the 200kg clean and jerk barrier on the last lift of the competition to set a string of new British records.

Omar Keshta was runner-up with a total of 306kg. Despite repeatedly bashing his shins against the bar, he battled on to set some new British U23 records in that division, beating his own efforts from the England event.

Filip Taylor also smashed two of his own British U23 benchmarks en route to the 96kg title. He clean and jerked 165kg which resulted in a new record total of 290kg.

Team GB athletes Zoe Smith and Chris Murray flew back to represent Loughborough just days after competing at the European Championships in Georgia.

Both were warmly received by the crowd and topped their respective groups with ease.

European Bronze medallist Smith attempted just one lift in each discipline, but both were good enough for her to win by a margin of 22kg over the next best 64kg competitor.

Murray meanwhile had a go at all 6 attempts and hit five of them to bow out on a total of 300kg in the Men’s 81g class. He celebrated in style by doing a backflip on the platform.

One of the closest groups of the weekend was the Woman’s 59kg class which featured a three-way battle between Jennifer Tong, Juliette Chang-Fane and Amber Sheppard

The result was decided on countback as Tong and Chang-Fane were tied on a total of 174kg, but the latter took the title by producing her best effort first.

Sheppard claimed the final medal position with 170kg after successfully clearing all three of her clean and jerks.

Bournemouth’s Noorin Gulam won the Woman’s 55kg category. The British U23 international snatched 70kg and clean and then clean and jerked 85kg for a total of 155kg.

Team GB’s other youth athletes also fared well at the event. Murtaza Nadeem clinched the 89kg class while Michael Farmer came out on top in the 67kg category.

A full list of team results can be found here.