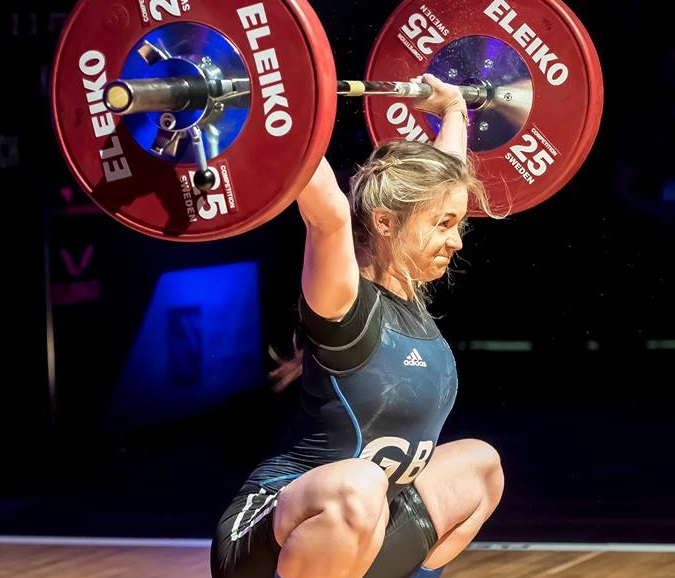 Luca Michael, Mohez Khan and Mohamed Al-Harthy were all crowned British Champions in group one to start the weekend, 21-year-old Luca from Oaklands Weight Lifting Club also set a new British record with a 112kg clean and jerk.

Next up was the women’s 48kg and 53kg groups, Aureila Liu hit an impressive 138kg total, taking the title for the U23’s after Jennifer Tong missed all three snatch attempts in the W53. Kristine Santos was also crowned U23 British champion along with Bethan Roberts and Charley Craig, who both  took gold for the juniors.

Men’s 69kg class were up next, where the bar started at 65kg for the snatch. Bronze medallist Toby McCarthy was one of the athletes to make his debut on the British Junior platform and finished the competition with a 200kg total. Joe Fenney took 2nd and 18-year-old Michael Farmer won gold for the juniors with an impressive 227kg total. Over in the U23 M69kg, British Senior Championships fourth place finisher Hakeem Babalola took the British U23 title.

The fourth group of the day was the women’s 58kg class. The battle between British Senior Champion Fraer Morrow and Amber Sheppard was set to be a close one as Amber came out to the platform at an opening 70kg successful snatch, followed by reigning champion Fraer with a loaded bar of 71kg. Fraer narrowly missed all three snatch attempts as Amber went on to finish the competition with a 70kg snatch and a 90kg clean and jerk, taking the gold for the women’s 58kg juniors. In the U23 W58 class, British Senior champion Laura Hewitt put on a remarkable performance before being crowed junior champion.

In the men’s 77kg class, Laurence Oakden cleared one snatch lift of 105kg but made 2 out of 3 attempts on the clean and jerk, finishing on 122kg, claiming the title for the juniors. U23 lifter Karl McClean also won gold with a 263kg total.

To round off day 1, the women’s 63kg class took to the stage. After 5 successful lifts, Leeds City lifter Josephine Dobson was crowed British junior champion with a total of 143kg, whilst over in the U23 competition, British senior silver medallist, Grace Lilly won gold after an impressive power snatch and power clean performance and a total of 184kg.

Day 2 of the British Junior & U23 Championships began with the men’s 85kg class. Miles Morgan won gold for the juniors with a 253kg total with Rhodri Beynon in close second with a 247kg total. Over in the U23 category for the men’s 85kg class, senior British champion, Guy Michel Tchuissi put on an remarkable performance to take the British U23 title with a 290kg total, clearing 2nd place by a 20kg.

Next up on day 2 was the women’s 69kg class, Northern Tyneside’s Lilly Petts and reigning U23 Champion Holly Knowles took first place in this group, both athletes making 4 of the 6 lifts.

Reigning junior champion Thomas Whelan retained his title in the men’s 94kg juniors with an impressive 256kg total. Over in the U23 competition, the battle between reigning British U23 and senior champion Cyrille Fagat Tchatchet and 2017 British senior, silver medalist Edmon Avetisyan had the audience on the edge of their seats. After Cyrille cleared his second snatch of 145kg, Edmon missed his opening lift of 146kg, before moving the bar up to 150kg for his second attempt. After a good lift at 156kg by Edmon, Cryille decided to not complete his third lift and wait for the second part of the competition to begin. Edmon then missed his final lift of the snatch, leaving just 5kg between the two lifters. Both lifters then went on to clear 180kg on the clean and jerk. After clearing his 2nd lift, Cyrille then decided to again, not complete his final lift, leaving Edmon to attempt 190kg and 192kg. After a phenomenal show, Edmon finished his clean and jerk on 180kg. Cyrille retained his title due to Edmon’s guest appearance.

The fourth group of the day was the women’s 75kg, 90kg and 90kg+ categories. Stars For The Future’s Deborah Alawode won gold for the juniors in the 75kg as Emily Pursehouse took the title for the U23, beating 2nd place finisher Charlotte Thomas by just 1kg. Junior lifter Brityn Vreeland and last year’s U23 silver medalist Lauren Miller both won gold for the 90kg groups. Reigning champion Mercy Brown put on a fantastic performance, making all 6 lifts with a 103kg snatch and a 133kg clean and jerk, leaving her with an impressive 236kg total and another British title.

The final group of the competition was the men’s 105kg class, this group saw Mackenzie Middleton take the junior British title with a 240kg total and Prosper Armstrong take first for the U23 group, clearing 2nd place by a staggering 46kg.