British Weight Lifting (BWL) is pleased to share the results of twelve British athletes at the World Para Powerlifting (WPPO) European Championships that was held in Tbilisi, Georgia from 24-29 September 2022. 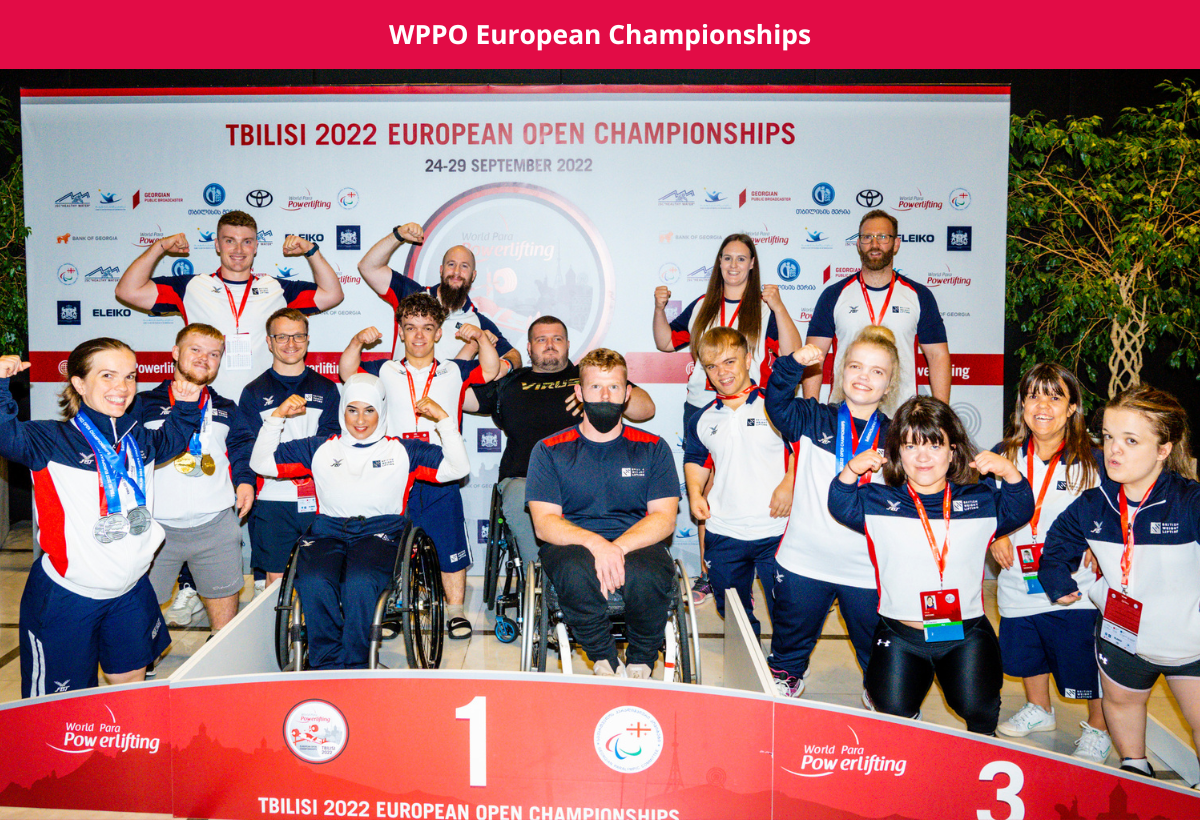 The team comprised of the following athletes:

The athletes were supported through the competition by Team Manager Tom Whittaker, Coaches Ben Richens and Connor MacDonald, and Physiotherapist Katie Collis.

The competition kicked off on Saturday 24 September and Mark Swan was the first of the athletes to lift in the men’s 65kg category, setting the tone with an incredible performance.

Mark opened his bench at 190kg for a good lift, he followed with an attempt at 195kg that was unfortunately a no lift for the press sequence. He took this weight again for his third attempt and secured a successful lift, putting him in first place for a gold medal and title of European Champion.

Mark then came out for a power lift fourth attempt of 200kg to set a new European Senior record, gaining three white lights.

Next up was the women’s 61kg category in which Rebecca Bedford, Kim Dean and Doaa Shayea were lifting.

Rebecca’s first bench was a good lift at 86kg and she gained three white lights for her second lift of 88kg. Her final lift was an amazing 90kg bench for top spot. This gave Rebecca a gold medal and title of European Champion.

Kim took her first bench at 84kg for an easy opener. Kim’s second attempt of 87kg was unfortunately a no lift for the press sequence. Despite this, Kim went up to a personal best attempt of 89kg for a strong triple white light lift. This put Kim in second place, gave her a silver medal and she was just one kilo away from the gold medal.

Doaa had a fantastic international debut at the competition. Doaa opened her bench with a strong 62kg. She then gained three white lights for her second lift of 65kg. Doaa jumped up to 70kg for her final lift but missed out on the press. This put Doaa in fourth place and gave her a third place for the total.

On Sunday 25 September, the men’s 59kg category competed, where Sean Clare put on an amazing performance.

Sean took his first bench at 139kg for a strong good lift. For his second bench, Sean set a new personal best at 144kg. Sean added 3kg to this for his final bench, getting a good lift at 147kg.

This put him in third place for a bronze medal.

For his first attempt, Tom made light work of a 115kg bench, gaining three white lights from officials. He added a further 10kg to his total on his second attempt, finishing on 125kg. Tom had the option to complete his third lift however due to personal health reasons chose not to.

Nathaniel competed in the men’s 80kg b group, but that didn’t stop him making it to a total medal.

Nathaniel opened his bench with a super speedy 157kg, followed by a strong 160kg and finished with a triple white light 162kg.

This put Nathaniel in seventh place for the best lift and his consistency placed him in third place in the total, giving him a bronze medal.

Tuesday 27 September brought out Lottie McGuinness and Olivia Broome to the platform in the women’s 55kg category.

Lottie’s first bench was just 2kg under her personal best at 84kg and she had a confident start with three white lights. For her second lift she made a new personal best of 85kg. Lottie pressed her last lift of 86kg, but it was unfortunately a no lift due to the press sequence.

Olivia had an outstanding performance, gaining nine white lights, the maximum possible. Olivia benched 107kg, 111kg to match her current personal best, then made 115kg for a new personal best.

This put Olivia in second place for a silver medal.

Last but by no means least, on Wednesday 28 September, saw Zoe Newson compete in the women’s 45kg category, Matt Harding in the men’s 72kg category and Liam McGarry in the men’s 107+kg category.

Zoe had a great start with a triple white light 97kg bench. She followed with a 100kg good lift and finally attempted 103kg for a new personal best. Unfortunately the lift was deemed a no lift due to the press sequence.

This put Zoe on top spot, bagging her a gold medal and title of European Champion for the second time.

Matt had an exceptional performance at his first European Senior Championships. Matt got a perfect nine white lights from referees and added 4kg onto his personal best. Matt benched 172kg, 175kg then 179kg.

This gave Matt a 5kg lead on his competitors, putting him in the top spot, giving him a gold medal and the title of European Champion.

Liam opened his bench with an easy 208kg lift and followed with a triple white light 213kg. For his final attempt, he had to jump up to his personal best weight of 220kg to be in with a chance of a medal and on this occasion, it was unfortunately a no lift.

Tom Whittaker, Performance Director of Para Powerlifting reflected on the competition “A progressive and inspiring performance from the group representing our country. This was the most successful Europeans to date and a good indicator the team are in a positive position two years out from the games. The gold medal haul was satisfying but more so the quality of a number of performances. We will look forward and begin preparations for next year’s World Championships in Dubai.”

British Weight Lifting would like to congratulate the team of athletes for their exceptional efforts, both on the platform and in training prior to competition. The team performed incredibly, bringing back medals, titles and in Mark Swan’s case, a new European record. This result is a welcome addition to this year’s successes at the IWF Parapan American Championships and the Birmingham 2022 Commonwealth Games. BWL also extends its thanks to UK Sport who continues to be instrumental in aiding the growth and development of para powerlifting in Great Britain.