Another successful day at the IWF World Cup in China!

It was a second successful day for GB weightlifting at the IWF World Cup and Tokyo Olympics qualifying event in Tianjin, China. 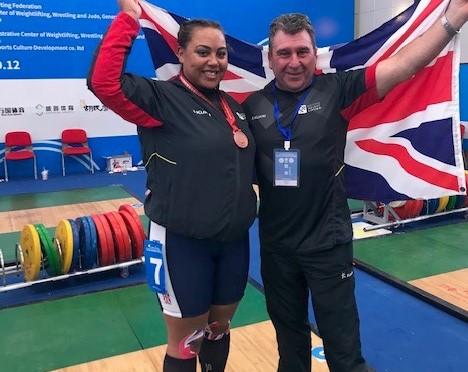 Emily Campbell continues to improve and show she can compete with the very best in the World in the W87+kg category.  Against a high class field of lifters, including the 19 year old Chinese World champion and world record holder, Li Wenwen, she performed magnificently getting a bronze medal in the Snatch with a PB of 119kg, which set a new British record.

Her Clean & Jerk was 152kg and she came a close 4th, narrowly missing her final lift of 157kg which would have taken her into third place in the Clean & Jerk and 2nd overall in the competition.   In the final placings, Emily ended up in an impressive 4th place with a total 271kg which was a further PB and British record total.

Today’s performance will certainly help maintain her current World ranking position and with 5 months to go, it leaves her with an excellent chance to secure Tokyo Olympic qualification.