There were 10 award categories, some of which were introduced for 2021 and British Weight Lifting are excited to announce the winners for each category: 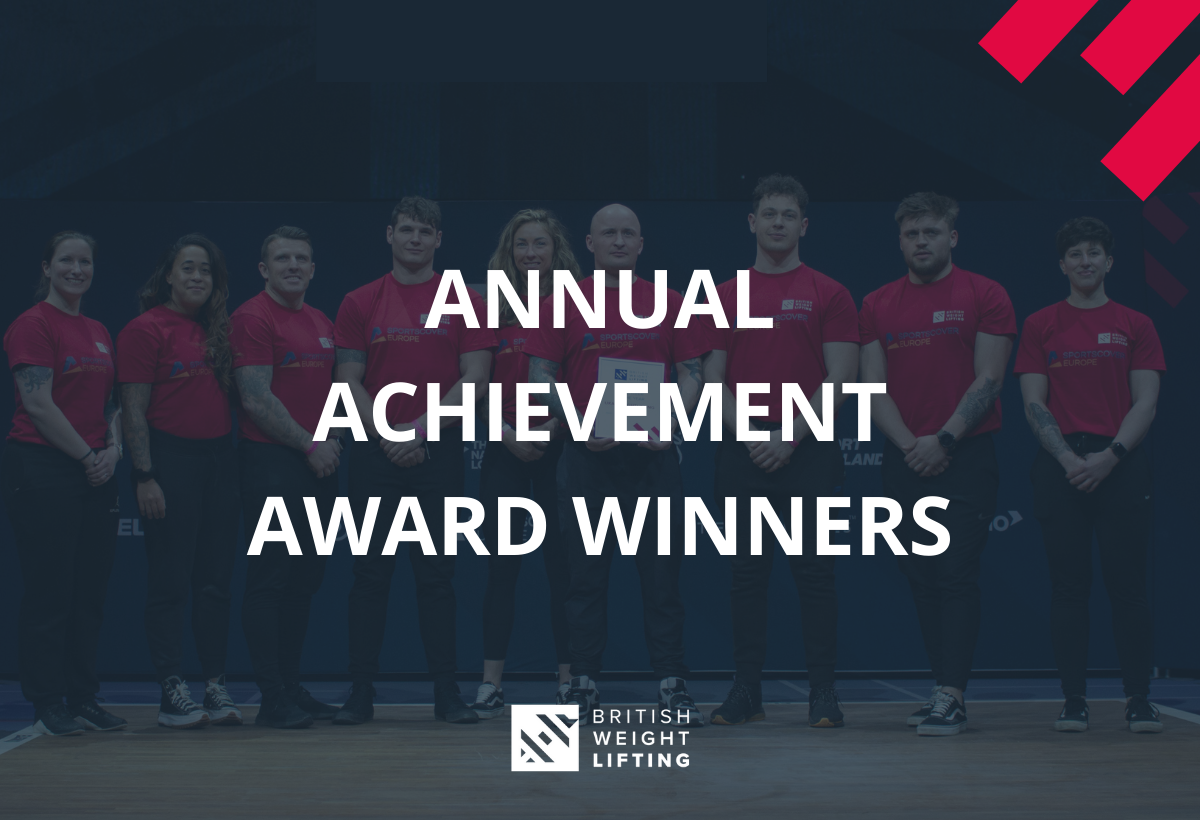 Coach of the Year – Ben Richens

Ben has been awarded coach of the year in recognition of his outstanding work throughout para powerlifting. He has developed several talented new international and world class program lifters. We saw some fantastic medal outcomes as a result of his management and delivery at the Paralympic Games and World Championships whilst concurrently coaching in the community as well as supporting new athletes wanting to engage in the sport.

Pride Performance is a British Weight Lifting affiliated club and talent academy based in Warrington. Pride Performance opened in 2018 with the ambition to make weightlifting accessible to everybody and to give people of all ages and abilities the chance to take part in an Olympic Sport. Run by Andrew Griffith and Heather Flannery, over the last 4 years the club has gone from strength to strength making weightlifting accessible from a young age, whether it’s for fun or to progress as an athlete.

Technical Official of the Year – Dyana Altenor and Jennifer Maysmor-Gee

Previously GB weightlifters and British Champions in their own right, Dyana and Jennifer are well known throughout British Weight Lifting supporting competitions as Technical Officials and have recently become IWF Category 1 referees, the highest qualification you can get in Olympic weightlifting. In 2021 Dyana and Jennifer toured England and Wales to encourage and motivate lifters with their weightlifting skills after lockdown, raising money for the British Weight Lifting Foundation in the process. They raised a phenomenal £600 in the process. Thank you for your continued support!

Volunteer of the Year – UKAF Weightlifting

The UK Armed Forces have been a fantastic support in loading at British Weight Lifting competitions throughout 2021. From the Para Powerlifting World Cup in February to the British Championships in June. The team bring an extremely professional approach to their volunteer role, working tirelessly to ensure the bar is loaded throughout our competitions.

Emily Sweeney has had a breakthrough year as the only youth athlete selected for the England Commonwealth Games training squad. Despite being unable to attend the World Youth Championships in Saudi Arabia in November Emily has shown excellent resilience and continued to make excellent progress concluding in her recent first senior medal at the British Championships in Derby. The award is well deserved and she continues to be a positive role model, training partner and friend to her National squad teammates who speak highly of her.

Emily will go down in history as one of the best British weightlifters, helping to re-establish Great Britain as a competitive force in international weightlifting. Emily produced a sensational display in Tokyo to top the women’s 76kg category B group and secure a superb seventh place finish overall. The result caps off a sensational career that has seen Emily win gold at the European Championships, Commonwealth Games, Commonwealth Championships, Arafura Games, Australian Open and clinch clean & jerk bronze at the World Championships in recent years. She has been an incredible role model and her success continues to act as a springboard and inspiration for the current and next generation of athletes.

Ali has had a trailblazing career thus far with world records, a world championship gold and Paralympic silver medal. Ali has made a significant contribution to anti-doping in the UK through committee and board representation and his current phd studies. Ali is also an active member of Global Athlete, an international athlete-led movement, working on behalf of athletes domestically and internationally, ensuring they are heard and their rights upheld. In 2021 Ali co-founded the first disability focused exercise app and is currently driving that forward, an exciting opportunity for the athletic community.

Coming from a renowned weightlifting family and after a long and illustrious career, as a lifter, coach and much respected International Technical Official, Diane (Suzy) continues to set unbelievable standards for herself and fellow Masters’ lifters every time she goes onto a platform. Despite the pandemic, she had a fantastic year of competing in 2021, most notably at the European Masters Championships, where she secured 3 European records and won a gold medal.

Erin has consistently demonstrated progress throughout 2021, been a supportive team mate, and put on a fantastic performance at the World Youth Championships in October 2021. As any coach and athlete will know making 6/6 lifts in competition generally means you’ve prepared well and had a very good day at the office, but to do this at your debut international and deliver three Personal bests & British records in the snatch, clean and jerk and total is a fantastic achievement for such a young athlete!

Mark delivered ?phenomenal para powerlifting performances in 2021, showing significant progress towards the senior world and paralympic medal zone. As a result, he ended the year by securing a gold medal in the Junior World Championships and fourth place at the Senior World Championships. Mark is setting new standards for physical progress as part of the World Class Program and is an exciting talent for the future.

Emily Campbell made history in Tokyo by becoming the first British woman to medal in weightlifting at the Olympic Games by securing silver to win Great Britain’s first medal since 1984 where David Mercer took bronze in Los Angeles. Campbell snatched 122kg to match the British senior women’s 87kg+ record and go into the interval in fourth place before hitting a British and Commonwealth clean and jerk record of 161kg to seal silver, helping to put British Weight Lifting on the map in the process. Capping off an unbelievable year, Emily picked up a silver and two bronze medals at the World Championships in Tashkent and three golds at the Moscow European Seniors.

A dream debut for Olivia Broome at the Paralympics saw her bench her way to a bronze medal in the women’s up to 50kg competition. She lifted a British and World Junior record of 107kg to break her own benchmarks to seal a spot on the podium. At the world Championships Olivia secured a silver medal and broke her junior world record for the second time that year. What an incredible performance!

Cyril Martin is based at Atlas Weightlifting Club, in Alfreton, Nottinghamshire. Cyril has over six decades of weightlifting experience. At sixty, he even competed at the World Masters Championships. Cyril has coached many athletes to medal successes, his most notable being Emily Campbell at the 2020 Olympic Games. Hugely deserved, he has, and continues to make an incredible contribution to the sport of weightlifting.

Ashley Metcalfe, BWL CEO commented “We were delighted to see so many nominations for our 2021 annual achievement awards. With more athletes and volunteers now active than ever before, these awards are vital in recognising the contributions of our members and clubs. I would like to congratulate the winners but also take this opportunity to thank everyone who made the short list as well for their contribution to the sport of weightlifting and para powerlifting. Without our members, clubs and volunteers we wouldn’t be able to drive the sport forward in the way we are able to and so we are extremely grateful for everyone’s support.”