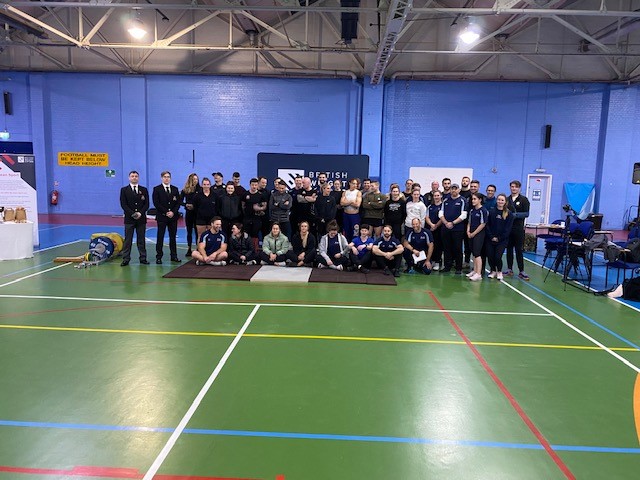 The first group of the day saw the women’s lightweight athletes go to battle on the platform, with some fantastic performances from both experienced and novice lifters, with Sian Peters from the Army coming out on top with a strong 160kg total, Stephanie Pye (RAF) was second with Ellie McManus (RAF) in third.

Group two was the men’s lightweight, and another close-run battle with Shane Caswell from the Army ending up on top with a strong performance and a comp PB total of 247kg. There was a close battle for second and third place with Luke Mees (RAF) narrowly beating Simon Dean (Army) by 1kg.

The women’s heavyweight group was next with Charlotte Davies (Army) leading the way with a fantastic 182kg total, with Maddie Elliot and Lucy Spy both from the RAF taking second and third place respectively.

The final group of the day was another close-run battle, with Mike Cutler (RAF) who had also organised all the competition, coming out on top with an impressive 268kg total. Army lifters Callum Condon and Stu King took second and third place in the group completing an outstanding day of competitive weightlifting.

Once all the scores were counted, it was clear Army Weightlifting had retained the Inter Services title but was evident how far Services weightlifting has progressed in the last few years, with the RAF pushing the Army hard for the title. Best lifters of the day were selected by BWL Competition Manager Eddied Halstead with Sian Peters (Army) and Mike Cutler (RAF) being the nominated best female and male respectively.

Garry Jackson the Army Performance Manager commented “The last 18 months has been turbulent and uncertain for many people. The Army weightlifting team has been no exception. Despite the challenges presented, together they demonstrated that they are the embodiment of the team ethos - character, commitment, and consistency. Though not guaranteed, we were prepared and ready for success. Now preparations begin for next year’s battle to retain the title for a third year in a row.”

Jim Rodden Chair of RAF Weightlifting said “Today’s RAF Weightlifting hosted Inter Services, displayed an outstanding level of lifting and commitment from all coaches and athletes, with unprecedented involvement across all 3 services. This day could not have been such a resounding success without the organisation from Mike Cutler who went on to win gold in his group. Congratulations to a strong Army team taking the overall win. Armed Forced Weightlifting could not have achieved its officially recognised status as a sport in the services without the support of BWL which underpinned the endeavour. We look forward to further expansion of the sport we love within the service community”

Tim Scrivener Performance Manager of Navy Weightlifting said “It’s always an awesome day when the community of UK Armed Forces weightlifters come together and today was no exception. This was a very well-run event by the RAF supported by BWL, which provided a brilliant competition which was a pleasure to be a part of.

BWL look forward to supporting the Armed Forces in their ongoing development of weightlifting and thank them for their continued support in our competitions and development.